The Tampa Bay Lightning won’t just let the New York Islanders get away with a 2-0 series lead. After clobbering the Isles in Game 2, Tampa Bay tied the series at one win apiece. Will they take the driver seat with a win later tonight, or will the Islanders take the lead again? Read on for our analysis of this game. You can also check out our preview of Game 3 between the Stars and the Blues.

In case you forgot: Tyler Johnson is a lethal postseason performer. Johnson reminded everyone of his penchant for rising to the occasion during the playoffs when he netted two goals in a 4-1 win over New York on Saturday.

Johnson and some other players have definitely stepped up in light of Steven Stamkos’ absence. Johnson leads the team with 10 points (four goals and six assists), while linemate Nikita Kucherov has nine points (six goals and three assists). The firepower is there for the Lightning, and when paired with outstanding goaltending from Vezina Trophy candidate Ben Bishop, Tampa Bay could put any team in deep trouble.

Head coach Jon Cooper brought the Triplet Line in Game 2 with Ondrej Palat, Johnson, and Kucherov playing in the first line. With the success Tampa had on Saturday, expect Cooper to utilize the three in the same line again for Game 3. The Lightning outshot the Islanders in Game 2, 31-20. On the series, Tampa leads New York in shots, 67-42.

Bishop bounced back from a letdown Game 1 performance by deflecting 19 of the Isles’ 20 shots in Game 2. Tampa Bay is 7-3 in Bishop’s last 10 road starts. 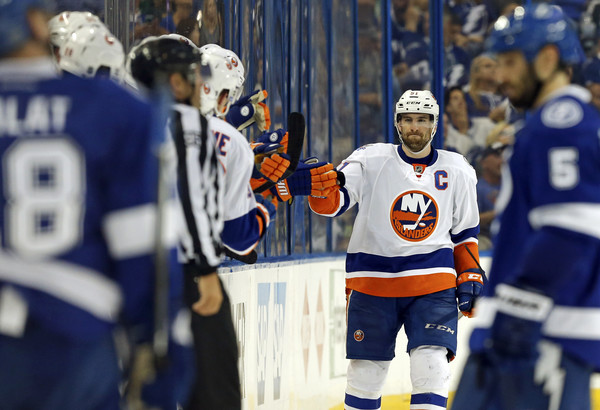 After scoring five goals in Game 1, the Islanders could only come up with one in Game 2. New York will have to find its offense if it is to take down the Lightning on the road later tonight.

John Tavares had three goals in two games prior to Game 2, but had a hard time navigating through Tampa Bay’s blueline that did a terrific job of limiting New York’s shot attempts as noted earlier. Tavares did have three shots on goal, but no other Islander had more than two.

Obviously, the Isles have to put more pressure on Bishop, who’ll be happy to deal with around 20 shots per game. Some line changes could be in store for New York, especially after the third line of Shane Prince, Brock Nelson, and Ryan Strome mustered just one shot on goal on Saturday.

As for their defense, the Islanders hope that goalie Thomas Greiss will look to do a better job this time around. He allowed the Lightning to score two goals on their first four shots in the previous contest.

The Isles still have faith on Greiss, however.  They are 5-2 in Greiss’ last seven road starts.