Victoria Azarenka is making another big run Down Under. The two-time Australian Open champion has seemingly rediscovered her best form after a rough couple of years, and looks like a prime contender to claim another title. However, she faces a potentially dangerous fourth-round matchup against Barbora Strycova, who’s coming off a huge upset of No. 3 seed Garbine Muguruza.

Read on below for our preview of this women’s Round of 16 match. Also, check out more top Aussie Open matchups, this time from the men’s draw, with our previews of Raonic vs. Wawrinka and Murray vs. Tomic.

Victoria Azarenka is back, or is pretty close to it. After struggling with injuries for the past couple of seasons, the former World No. 1 has played like her pre-injury best during the first three rounds of the Aussie Open.

[sc:AUS15-250 ]The No. 7 seed has simply been blowing her opponents away. She’s lost just five games total in her first three matches, and has averaged just under an hour on the court per match.

Azarenka came down to earth a bit in her third round match against Naomi Osaka. After winning over 90 percent of her first serve points in the first two rounds, she won just 74 percent against Osaka. She also committed 21 unforced errors, five more than her total in for the first two matches.

Azarenka is playing so well that she can probably afford to play significantly worse and still have too much for her fourth round opponent Barbora Strycova. But with how she’s played in 2016 thus far – she’s 8-0, all via straight-sets – don’t expect much of a drop-off from the -1,200 favorite.

Create a betting account now and cash in on the first Grand Slam tennis tournament of the year. 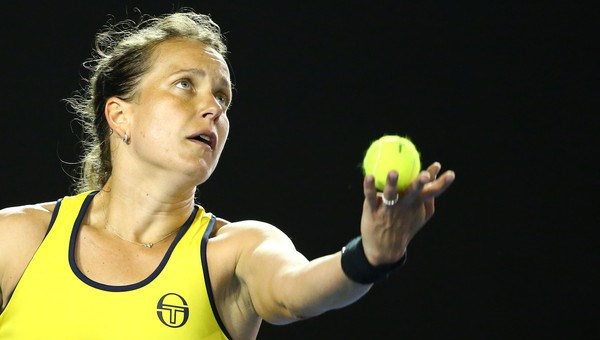 Barbora Strycova is making her best ever run in a Grand Slam in her 13-year pro career. The 29-year-old reached the fourth round of a Slam for the first time ever after she recorded a huge upset of No. 3 seed Garbine Muguruza in the third round.

As her +700 odds of victory make very clear, Strycova faces a very tall task of taking down the red-hot Azarenka. She can’t compete with Azarenka’s superior shot-making and overall tennis ability. But she can stand a chance of pulling off another big upset if she doesn’t help beat herself. She did just that in her upset of Muguruza. She limited her unforced errors to only 16 against Muguruza, who went on to make 32.

Azarenka (-1,200) continues her run of dominance with another convincing straight-sets win over Strycova.