The Washington Capitals are slowly being eased out of the Metropolitan Division race picture no thanks to their current losing rut. Will the Caps end their losing binge with an emphatic win over the Chicago Blackhawks? Or will the Blackhawks stymie Alexander Ovechkin and the rest of the Washington crew?

Also happening tonight is an NBA game between the Dallas Mavericks and the Portland Trail Blazers. You can read a full preview of that game here.

For a coach like Barry Trotz who values defense more than anything else on the ice, seeing the Capitals give up a ton of goals through their current slide must feel like a punch to his gut. The low-lights just keep on coming for Washington, which has extended its losing streak to five games following a 4-3 overtime loss Tuesday against the Calgary Flames.

[sc:NHL240 ]The Capitals have surrendered a stunning total of 22 goals throughout their five-game skid. Even a high-scoring team like Washington will find it hard to win games so long as Braden Holtby and Justin Peters continue to flounder in front of the net. Holtby is 3-3 in nine games played with a 2.67 GAA and .891 SV%. Peters, on the other hand, is 1-2 with a 3.04 GAA and .880 SV%. The blue line, however, has been doing fine under Trotz, an assessment that could be reinforced by the team’s 25.2 shots against per game, second best in the NHL.

Washington is among the leaders in scoring in the league with an average of 3.1 goals per game. Alex Ovechkin and Joel Ward have six goals apiece to lead the team.

The Capitals’ power play remain as deadly as last season as their special teams have converted 29.3% of their chances on the man advantage. They have scored at least a power play goal in nine of their 12 games thus far this season.

The over is 5-0 in the Caps’ last five games overall.

Create a betting account now and make money on a ton of NHL games! 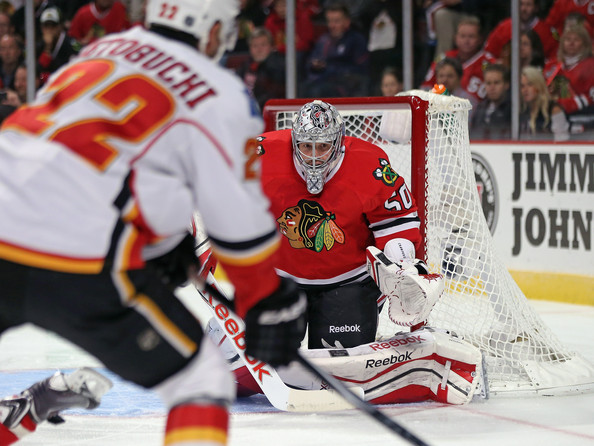 The Blackhawks finally got their offense and defense clicking at the same time as they broke up their two-game slide with a dominant 5-0 road win Tuesday against the Montreal Canadiens. The Habs, however, aren’t as offensively potent as Washington is, so expect the Blackhawks to be in for a tougher battle against the Caps.

Nevertheless, the win over the low-scoring Canadiens does nothing to downplay the tremendous performance of the Blackhawks’ defense thus far this season. The Hawks are limiting opponents down to just 1.77 goals per game, the lowest in the league.

Corey Crawford has been a steady force between the pipes for Chicago. He has a 4-2 record and a 1.54 GAA.

Surprisingly, it’s in the offensive end of the ice where Chicago is struggling. The Blackhawks are 21st in the NHL with just 2.5 GF/G, which doesn’t feel right given the amount of firepower on the team. But the group of Jonathan Toews (5 goals), Patrick Kane (4), Patrick Sharp (3), and Marian Hossa (2) could deliver big versus Washington following their conquest of Montreal. Kane ended a seven-game goalless stretch by netting one against the Habs.

Chicago is 3-1 in their last four home games against the Capitals.