Arizona’s perfect season is finally over after suffering a 21-point beatdown against the Denver Broncos. They will look to return to winning ways this coming Sunday when they face the Washington Redskins who are currently on a three-game losing skid.

Who will emerge victorious in this matchup? Read on for a complete preview of this showdown and while you’re at it, you can check out our preview of the big NFL clash between Dallas and Seattle.

Where: University of Phoenix Stadium, Glendale

Washington’s struggles continued on Monday night as they lost 27-17 to the Seattle Seahawks to crash to their third straight defeat.

[sc:NFL240banner ]The Redskins had trouble stopping Seahawks quarterback Russell Wilson who rushed for a career-high 122 yards and a touchdown to add to his 201 passing yards (18-of-24) in the game. The Seahawks stormed to a quick 17-0 lead and never looked back as they sent the Redskins to the bottom of the NFC East standings with a 1-4 slate.

Washington have now allowed an average of 36.1 points in their last three losses, a worrying stat since they don’t create that much on the offensive end. In their last two games, they only managed to score an average of just 15.5 points.

One positive note for the Redskins was the improved performance of quarterback Kirk Cousins. He rebounded from his five-turnover game against the Giants last week with a 283-yard, two-touchdown showing against the Super Bowl champions. Still, Cousins is still winless in his three starts for Washington this year.

He will look to end that three-game losing streak when they face the Cardinals this coming Sunday. The Cardinals have the ninth-worst defense in the league this season with opponents averaging 379.2 yards against them.

In fact, they have the second worst passing defense in the league just behind the still winless Jacksonville Jaguars. They have allowed opponents to rack up an average of 302.5 passing yards per game against them this season.

Seeing how Manning terrorized the Cardinal secondary last Sunday, Cousins will be licking his chops at doing the exact same thing against Arizona this coming weekend. The Redskins are fifth in the NFL in the passing department with an average of 288.8 passing yards per game. 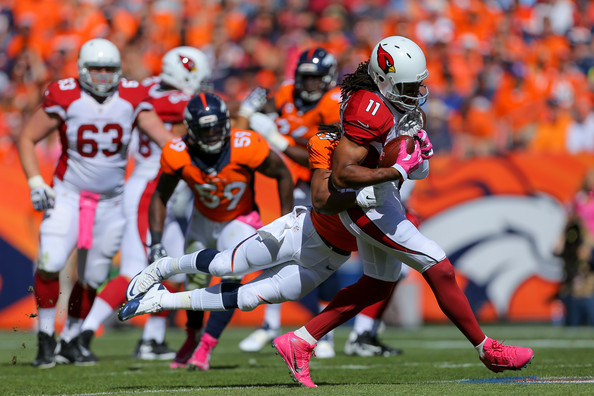 The bye week didn’t help matters for the Arizona Cardinals as they were crushed by the Denver Broncos 41-20 in Week 5 action to slump to their first defeat of the season.

The Cardinals had no answer for quarterback Peyton Manning who joined Brett Favre as the only NFL players to throw 500 touchdown passes in their careers. Manning completed 31 of 47 passes for 479 yards and four touchdowns with two interceptions in a game that saw Demaryius Thomas and Wes Welker make history too.

Thomas set a franchise record with 226 yards on eight catches as the Cardinals allowed a whopping total of 568 yards in the game against the Broncos. That was the most they have allowed in a single game since 1973.

Denver’s offense was just too much for Arizona as they almost matched the total number of points the Cardinals have surrendered in their first three assignments (45 points).

It won’t get any easier for the Cards as they will face the Washington Redskins who are seventh in the NFL this season in total offense with an average of 393.6 yards per game.

Defensive end Calais Campbell will miss out on this ballgame after suffering a right knee injury with a chop block by Julius Thomas that Cardinals head coach Bruce Arians branded as the dirtiest play he has ever seen in his 37 years of coaching.

One guy who will look to make amends against the Redskins is cornerback Antonio Cromartie. Manning completed only six of 14 passes aimed at Cromartie but those half-dozen grabs resulted into a total of 199 yards for the Broncos.

Luckily for him, he will not face Peyton Manning this coming weekend. Quarterback Kirk Cousins, however, will be a tough opposition as the 26-year-old is ranked sixth among starting quarterbacks in passing yards with a 304.2 average.

They will need the offense, however, to play its part as well if they are to grab the win against the Redskins. They are currently the fourth-worst team in the NFL in terms of total offense averaging just 305.5 yards a game this season.

A worrying development for the Cardinals is that quarterback Drew Stanton who has filled in admirably for starter Carson Palmer, left the game against the Broncos with a shoulder injury. His status for the game against the Redskins is still up in the air and his possible absence will be a big blow to an Arizona team that is already fifth-worst in the NFL in scoring with a measly 21.5 point average this season.

The Cardinals pile more misery on the Redskins.