Throughout the history of the NBA, few teams have had more success than the Boston Celtics. Every win, every trip to the playoffs and every championship: all were owed to some huge moments that have encapsulated the greatness of the franchise.

From the Red Auerbach-era and Larry Bird’s time, right up to the Paul Pierce-led squad, we list here ten of the most memorable moments in Celtics history.

During the 1965 NBA Eastern Division finals, the Celtics’ chase for a seventh consecutive league title was in jeopardy as the Philadelphia 76ers led by Wilt Chamberlain and Hal Greer took Boston into a final and deciding Game 7.

Only down by a point with just a shade under five seconds, Havlicek knocked off an inbound pass from Greer to protect the lead and catapult the Celtics into the 1965 NBA Finals. Making this moment even more memorable was the thrilling “Havlicek stole the ball!” call of radio announcer Johnny Most on the play.

The last thing the Detroit Pistons wanted to do was to turn the ball over to the Celtics in the waning seconds of the 1987 Eastern Conference finals. Hanging on to a slim one-point lead, the Pistons had Isiah Thomas on the sideline to inbound pass the ball. Under duress, Thomas made a weak pass towards Bill Laimbeer, when suddenly Bird burst into the picture, swiping the ball. Bird also had the presence of mind to give the ball to Johnson for an easy, though contested, lay-up, giving the Celtics the lead and the win.

Who could forget a game dubbed the “Greatest Game Ever?” Certainly not a Boston Celtics fan. It was Game 5 of the 1976 NBA finals between the Celtics and the Phoenix Suns. The series was tied, 2-2, and the winner would be one win closer to the championship. In the end, the Celtics proved to be too much for Phoenix as Boston eked out a very exhausting 128-126 victory after three overtime periods.

The early part of the 2000s left a few memorable moments for Celtics fans. One of those was the epic comeback of the Paul Pierce-and-Antoine Walker-led squad in Game 3 of the 2002 Eastern Conference finals against the New Jersey Nets. Down by 21 entering the fourth period, the Celtics collected themselves and launched a record-setting comeback, upending the Nets, 94-90.

Allen accomplished his dream of winning an NBA title when he played alongside Kevin Garnett and Paul Pierce with the Boston Celtics. The sweet-shooting Allen also recorded another memorable feat witnessed by the home crowd when he knocked down his 2,561st three-point shot, breaking Reggie Miller’s record and crowning himself the new king beyond the arc.

Ask any Celtics fan what their best memory of Bird is and he or she will roll out quite the list. And without a doubt, Bird’s 60-point eruption against the Atlanta Hawks in 1985 would be high among their answers. Bird’s performance set a new single-game scoring record for the Celtics, just nine days after teammate Kevin McHale recorded the previous best mark of 56 points.

Henderson’s famous steal in the highly anticipated Celtics-Lakers 1984 NBA Finals match-up went down as one of the three most famous takeaways in the history of the franchise. The Lakers took Game 1 of that series. Game 2 was a tight game down the stretch with the Lakers leading, 115-113, with possession in the dying moments. An errant pass by Magic Johnson was anticipated by Johnson, who quickly laid up the ball to tie the game. The game went to overtime and the Celtics won, 124-121. 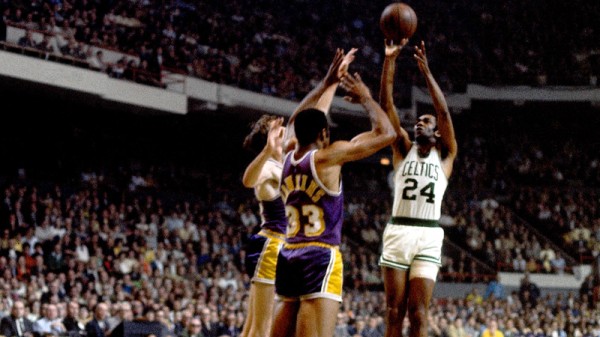 With the clock ticking down in Game 4 of the 1969 NBA Finals, the Celtics turned to Sam Jones, who used a phalanx of screeners to get off a shot that bounced before trickling into the basket to defeat the Lakers, 89-88.

The Celtics made sure that, despite their aging roster led by Bill Russell, the balloons hanging in the ceiling of the Lakers home court would not fall.

The game started with Boston jumping to an early lead, before the Lakers cut it to just one with two minutes left in regulation. John Havlicek was swiped off the ball, but fortunately, it went straight to teammate Don Nelson who promptly launched a shot from the free throw line to increase Boston’s lead, 105-102. The game ended with the Celtics on top, 108-106, to win the championship.

Game 4 of the 1987 NBA Finals saw the Celtics take a 16-point lead at halftime against the Lakers. The Lakers chipped at the lead until they found themselves down by only one with less than 30 seconds to go in the fourth quarter.

Coming off a timeout, Magic Johnson dribbled toward the key and launched a running hook shot that somehow found the bottom of the net, giving the Lakers the lead, 107-106. Larry Bird made one more shot at the buzzer but missed, allowing the Lakers to steal the game.

What are your favorite Celtics moments of all time? Share your thoughts with us on Facebook and Twitter, and don’t forget to check out the latest betting odds and lines of the next Boston Celtics game in our sportsbook. Game On!