It’s win or go home for the Washington Capitals again, as they make a trip to Consol Energy Center for Game 6 of their series with the Pittsburgh Penguins. Over at the NBA, the Oklahoma City Thunder and the San Antonio Spurs continue their heated series when they get entangled tonight at AT&T Center.

The Capitals extended their season with a 3-1 win over Pittsburgh on Saturday. They will have to repeat later tonight if they don’t want an early vacation. The Caps, who went 2-for-5 on the power play in Game 5, will look to keep going on the man advantage against Pittsburgh’s penalty kill that ranks just 13th in the postseason. The Capitals are 3-3 in their last six games in Pittsburgh. The Penguins, who are second these playoffs with 3.30 goals for per game, are 8-2 in their last 10 home games. 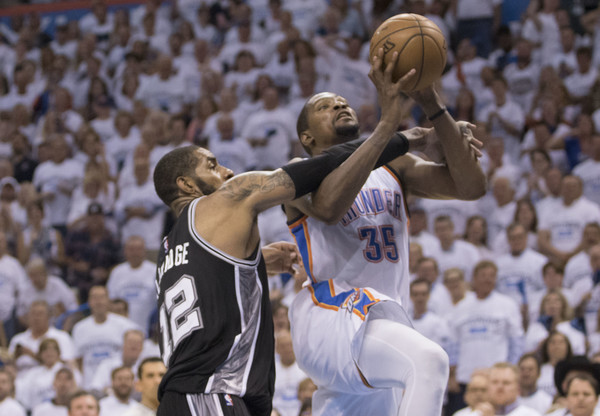 Kevin Durant was a man possessed in the Thunder’s 111-97 win over San Antonio on Sunday that evened the series up at two games apiece. Durant, who is averaging 26.8 points per game thus far this postseason, will try to lead the Thunder again in Game 6. Oklahoma City is 4-1 ATS in its last five road games. As for the Spurs, they are looking to return to their pass-heavy ways after making just 12 assists in Game 6. They are averaging 21.9 APG since the start of the playoffs. The Spurs are 3-1 ATS in their past four home games.