The Dallas Mavericks missed the playoffs for the first time since Dirk Nowitzki’s sophomore year in 1999-2000. Nowitzki only played 53 games after undergoing knee surgery just before the start of the season. Without their star German for a third of the season, the Mavs finished 41-41, four games away from the 8th seed in the West.

Things also didn’t go as planned for Dallas in the offseason. After missing out on prime free-agent Deron Williams who went to Brooklyn last year, Mark Cuban and the Mavs once again lost out for the signature of a marquee player when Dwight Howard ignored Cuban’s recruitment pitches and elected to join the Houston Rockets instead.

In lieu of star names, the Mavs signed veteran guards Jose Calderon and Monta Ellis to long-term contracts, while Devin Harris signed on for a one-year deal. Calderon is a steady but unspectacular point guard who will run the Mavs half-court offense capably; Ellis meanwhile is a bit more unpredictable from game to game but can be a spectacular scorer. He averaged 19 points per game last season with Milwaukee.

And to secure the frontline, the Mavs signed Samuel Dalembert and Brandan Wright to two-year deals.

These free-agent signings, along with ageing veterans Shawn Marion and Vince Carter, will be Nowitzki’s main reinforcements as he seeks to return to the postseason this year. Despite missing 29 games, Dirk still led the team in scoring at just over 17 points per game.

With a lack of superior talent, The Mavs were a middling 14th in Offensive Rating and 19th in Defensive Rating. The addition of a legitimate rim protector in Dalembert should help the defense. But a healthy Nowitzki this season will be the key to another playoff run.

What a difference a year makes. This time last season, the Houston Rockets were a team floundering without a marquee superstar after their attempts to trade for Dwight Howard from Orlando had failed. But mere days before the season, GM Daryl Morey swung a trade that would bring the Sixth Man of the Year James Harden from Oklahoma City.

Energized by the bombshell acquisition of Harden, who averaged 26 points per game, the Rockets reached the playoff as the eighth seed before bowing out to the Russell Westbrook-less Oklahoma City Thunder in six games.

[sc:NBA240banner ]This offseason, the Rockets conducted another coup by signing the long-coveted Howard via free agency. With Harden and Howard, Houston now has the foundation akin to Tracy McGrady and Yao Ming with which they hope to compete for a championship. The Rockets have blasted off into +160 to win the division and +1,200 to win their first title in nearly 20 years.

Of course, things never panned out for the T-Mac and Yao duo, mostly due to Yao’s persistent injury woes. Howard has proven to be very durable in his career, but he is only a year and a half removed from major back surgery. And despite averaging 17 points and 12 rebounds in 76 games for the Lakers last season, Howard’s play was noticeably diminished from past seasons, especially on defense.

On the Rockets, Howard will be expected to anchor a defense that surrendered the second most points per game last season (but was 16th in Defensive Rating).

Despite the presence of the two All-Stars, question marks still remain in other parts of the Rockets roster – namely power forward and point guard – where there is no clear starter. Either Terrence Jones or Donatas Montiejunas will likely start at the 4, but both are just entering their second NBA season. Meanwhile, Jeremy Lin played so poorly in the playoffs that he was benched in favour of Patrick Beverley.

Chandler Parsons will provide steady production from the perimeter, but others in the roster must step up if the Rockets plan to be part of the Western Conference elite.

The Memphis Grizzlies enjoyed the most successful season in its franchise’s history last year. Despite trading its leading scorer Rudy Gay in the middle of the season, the team under head coach Lionel Hollins went 56-26, good for the fifth seed in the West. After defeating the Clippers and Thunder, the Grizzlies reached the Western Conference Finals for the first time, but were swept by the San Antonio Spurs.

Even after such a great season, Memphis opted not to re-sign the out-of-contract Hollins. A major reason was reportedly a difference of opinion with new management, who traded away Gay to the displeasure of Hollins. His replacement, former assistant Dave Joerger, will have his hands full in following the most successful coach in the franchise’s history.

The Grizzlies did opt to re-sign lockdown defender Tony Allen. Together with Defensive Player of the Year Marc Gasol, NBA All-Defensive First Team member Allen is integral in the Grizzlies’ identity of tough, grinding defense, which ranked 2nd in the NBA in Defensive Rating.

Among the additions to the team were big man Kosta Koufos, who was acquired in a trade with the Denver Nuggets for Darrell Arthur and sharpshooter Mike Miller. Instrumental in both Miami Heat championships, Miller returns to Memphis where he will provide some much needed perimeter shooting along with Quincy Pondexter.[sc:NBA240banner ]

The Grizzlies will be banking on continued improvement from budding stars Gasol (who averaged 14 points, 8 rebounds and 4 assists) and point guard Mike Conley, but also on the return to form of Zach Randolph. After returning from an injury-shortened 2011-12 season, Randolph struggled to hit the heights of past seasons. His average of 15 points per game was his lowest since his second NBA season. The Grizzlies need Z-Bo at 100% if they intend to make it beyond the Western Conference Finals.

The New Orleans Hornets underwent some serious transformation this offseason. For one, they’ve changed their names – they are now the New Orleans Pelicans. The Pelicans also made some interesting moves with respect to their roster.

In the 2013 NBA Draft, the Pelicans green lit the trade that sent their no. 6 pick, which became Nerlens Noel, and next year’s first-round pick to the Philadelphia 76ers for point guard Jrue Holiday. Days later, the Pelicans acquired guard Tyreke Evans in a three-team trade.

Despite the steep price, the Pelicans snagged a good point guard in Holiday. Still only 23 years old, Holiday made his first All-Star team last year when he led the struggling 76ers with 18 points and 8 assists per game.

The jury may still be out on the Evans deal. Following his Rookie of the Year-winning campaign in 2009-10 when he became the fourth rookie to ever average 20 points, 5 rebounds and 5 assists, Evans’ points, rebounds and assists per game have all decreased with each passing year.

The acquisition of these two guards could create a logjam in the Pelicans’ backcourt rotation. The oft-injured Eric Gordon is still with the team and despite missing 40 games, led the team with 17 points per game last season. Last year’s first-round pick Austin Rivers struggled mightily in his rookie season and his playing time will probably be most affected by the arrival of Holiday and Evans.

Last year’s other rookie, no.1 overall pick Anthony Davis didn’t have the remarkable Rookie of the Year-calibre season everyone was expecting out of college, mostly due to injury. He did still average 13.5 points, 8 rebounds and almost 2 blocks in the NBA as a teenager, so he still has much time to grow. The Pelicans definitely need him to progress quickly on the defensive end, where they ranked 28th in Defensive Rating. 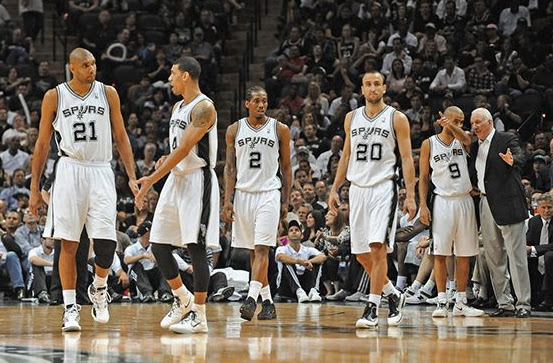 Tim Duncan and the San Antonio Spurs won’t get much closer to winning their fifth NBA championship than they did in Game 6 of the Finals against the Miami Heat. But life goes on and so do the Spurs, the only way they know how: continuity.

Essentially everyone is back for the Spurs this season. Tiago Splitter was handed a long-term deal. Manu Ginobili signed on for two more years. Gary Neal is the only notable departure, but his shooting should be replaced by the capable Marco Bellinelli.

The Spurs’ willingness to stand pat is a sign that they believe they can still win with its current core. Tony Parker can definitely still play, as he did in an MVP-type level last season averaging 20 points and 8 assists. But Tim Duncan, despite averaging close to 18 and 10 last season, is now 37 years old and his body’s ability to endure another gruelling run to the title becomes more doubtful.

Of the Spurs’ “Big 3”, Ginobili’s game has deteriorated the worst. His minutes, points per game and field goal % last season and in the playoffs were the lowest since his first few years in the NBA. It’s difficult to see an improvement in Ginobili’s production in the next two years.

Fortunately for the Spurs, Kawhi Leonard showed tremendous growth in just his second season. Leonard averaged a double-double in the seven-game Finals series against Miami, including a 19-point, 16-rebound Game 7. Gregg Popovich will likely give Leonard a more starring role this upcoming season.

The Spurs have proven over the years that they are a great regular season team, as Popovich has mastered the art of true team basketball while preserving his stars by limiting minutes. But as Duncan and Ginobili grow older, the margin for error come the playoffs, much like their championship window, grows smaller.

Despite the age and attrition, the Spurs are still +120 favorites to win this division, and still one of the favorites at +1,000 to win their fifth NBA championship.