The Oregon Ducks made some noise in the Pac-12 conference. They upset top-ranked Utah in the regular season and again at the conference tournament to reach the final, but could not take home the tournament title. Oklahoma State, in the meantime, had a couple of big upsets of its own against top-ranked Texas, Baylor and Kansas only to falter in its first game of the Big 12 tournament.

This is just one game in what should be a crazy March. To get a complete overview of the tournament, take a closer look at our printable 2015 bracket. Also don’t forget to catch the San Diego State vs. St. John’s game also set to tip-off on Friday.

Betting on the Oregon Ducks

The Oregon Ducks go where Joseph Young takes them. While Young and the Ducks were handed a crushing defeat, 80-52, at the hands of Arizona in the Pac-12 tournament final, they could still make some noise at the national tournament with their high-octane offense.

[sc:NCAAB240banner ]The senior guard leads his team with 20.2 points per game (13th in the nation) and 3.7 assists per game. He went on quite a tear during the Pac-12 tournament as he averaged 24.7 points on 47 percent shooting in three games.

What makes Young dangerous is his ability to score from anywhere on the floor. He’s averaging 2.5 three-pointers per game at a 35 percent clip and making 51 percent of his two-pointers.

But if opponents clamp down on Young, he can still dish out dimes to Oregon’s frontcourt tandem of Elgin Cook and Dillon Brooks.  Both forwards are averaging 13.2 and 11.5 points per game this season.

Repeatedly giving the ball to the Cook and Brooks duo could prove advantageous against the less-than-stellar frontcourt of Oklahoma State. That is if they can use their mobility against the bigger Cowboys.

The Ducks have won 10 of their 13 games against non-conference opponents this season. 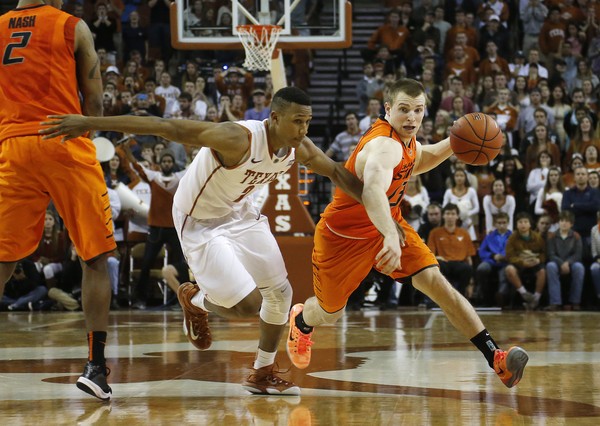 The Oklahoma State Cowboys may just have the right amount of defense to disrupt Oregon’s high-octane attack. They showed their stringent defense in their Big 12 tournament quarterfinal game against Oklahoma, limiting the talented Sooners to 35 percent shooting. But Oklahoma State couldn’t muster enough offense, eventually losing 64-49.

Guards Phil Forte III and Anthony Hickey Jr. are both averaging about two steals per game this season that could cause headaches for Oregon’s leading scorer, Young. Meanwhile, forward-center hybrid Michael Cobbins doesn’t score plenty of points (6.7 per game) but leads the Cowboys in rebounds (5.9 per game) and blocks (1.9 per game).

Oklahoma State could cause plenty of damage with some transition offense. Causing turnovers to score on the break may be their key to win this game. Oregon doesn’t have a tight defense; it allows 71 points per game (278th in the nation).

The Cowboys could make Oregon’s leaky defense pay with the high-scoring combination of Le’Bryan Nash and Forte. Nash is averaging 17.1 points per game, while Forte chips in 15.1 per game. But no other Cowboy is averaging in double digits this season.

Nash is averaging 3.2 fouls per game in his last five. Having one of their top two scorers sitting out due to foul trouble may give them trouble keeping up with Oregon’s breakneck pace.

Oklahoma State is 1-6 ATS in its last seven games.

Create a betting account now and punch your own ticket into the Big Dance.