The biggest stars of women’s singles tennis converge in Paris for the second Grand Slam of the season, Roland Garros. Can Maria Sharapova showcase her dominance on the clay court to capture her third French Open title in four years? Or will perennial favorite Serena Williams blaze a path to victory? There’s also a handful of worthy challengers all capable of setting themselves apart from the pack.

Read on as we survey the field of contenders for the 2015 French Open. You can also check out our complete preview for the Men’s Draw here.

Serena Williams (+275) started the season with a bang, winning her sixth Australian Open title back in January. She has been a force to reckon with all season long with her speed and power. Williams reached the semifinal round of Indian Wells before being forced to withdraw due to injury. But she returned a couple of weeks later to win the Miami Open. Both occurred on the hard court.

[sc:Other240banner ]Williams hasn’t quite been as dominant on clay, though. She reached the semifinals of the Mutua Madrid Open, where she fell to Petra Kvitova in straight sets. The World No. 1 then withdrew from her Round of 16 match against Christina McHale in the Italian Open due to another injury. Williams also hasn’t enjoyed the same success at Roland Garros in recent years. She’s made first and second round exits sandwiching her 2013 title.

Meanwhile, one of Williams’ fiercest rivals in Maria Sharapova has been excellent at the French Open. Sharapova has made three consecutive French Open finals in the past three years, winning the tournament in 2012 and 2014.

The slower pace on the clay court complements Sharapova’s aggressive baseline game well. This affinity for the clay court has shown in the lead up to the French Open with a singles title at the Italian Open and a semifinal appearance at the Madrid Open.

Sharapova is +400 to raise her third French Open title.

After falling off her No. 1 ranking from 2010-2011, Caroline Wozniacki (+2,000) has slowly clawed her way back to the top. But the World No. 5 is coming off a disappointing performance at the Italian Open, losing in her first match of the tournament in the Round of 32. Before her uninspiring performance in Rome, Wozniacki had a couple of good outings on clay. She made the final of the Stuttgart Open, losing to Angelique Kerber in three sets before making the quarterfinal of the Madrid Open (a three set loss to Sharapova).

Expect Wozniacki to turn some heads at Roland Garros. Her game centers on the defensive aspect of tennis. Her anticipation, movement, footwork and agility should work well on the slower surfaces of the clay court. 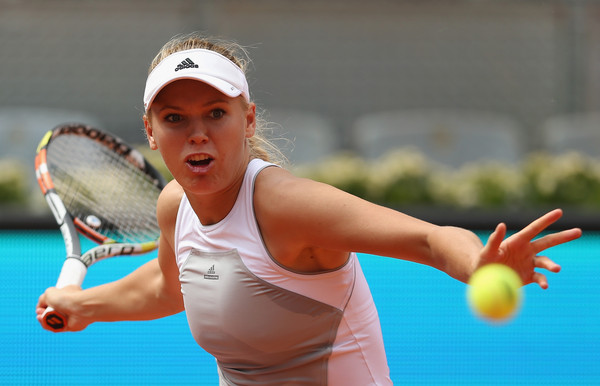 The aforementioned Kerber (+2,500) is having an excellent season on clay. She won two clay court titles in April, including dethroning three-time defending champion Sharapova in the Round of 16 at Stuttgart. But Kerber also had her fair share of troubles, making early exits in the first and second rounds of the Madrid and Italian Open, respectively, during her buildup to the French Open.

Great things are in store for 20-year-old youngster Madison Keys (+4,000). That much is certain after she broke through and reached the semifinal of the 2015 Australian Open only to lose to eventual champion Serena Williams. Keys has the necessary tools to excel on clay with powerful groundstrokes and capable volleying skills. She may be due for a breakout performance in the next Grand Slam of the year, the French Open. Keys impressed in taking Kerber (16th in the world) to three sets at the Charleston Open on clay.

Sharapova (+400) wins her third French Open title in the past four years. Create a betting account now and score a Grand Slam of your own on the top tennis players on the planet.