After three weeks of play, we’re starting to get a better picture of the FBS’ landscape. A handful of programs have emerged as true contenders for the national title, and we’ve got coverage on most of those championship hopefuls in our Week 4 preview below for you to also be on tap of the 10 biggest matchups worth betting on.

Thursday’s clash between the Tigers and the Yellow Jackets is more than just a match between a couple of undefeated programs, it’s also the first time that the two teams will face truly stiff competition this season.

While Georgia Tech made winning look easy against middling schools in Boston College, Mercer and Vanderbilt, and even though  No. 5 Clemson has lost five-straight contests in Bobby Dodd Stadium (2-3 ATS), the Tigers have a stifling defense – one that’s ranked eighth in the nation at 250 yards allowed per game – to shut down quarterback Justin Thomas and the Georgia Tech offense.

USC’s brutal four-game start to the season continues this Friday, when they take on No. 24 Utah’s daunting defense. In Weeks 1 and 3, the Trojans struggled to put up points against schools with great defensive prowess in Alabama and Stanford, respectively.

Having said that, expect Utah’s front seven, which ranks second in Division I with 15 sacks for the season (10 in last week’s demolition of San Jose State alone) to disrupt redshirt freshman QB Sam Darnold on Friday. Darnold is making his first start for USC in place of the struggling Max Browne, and he could very well be in line for a long afternoon against the rush-heavy Utes.

The Bulldogs have shown in each of their three games this season that they have tenacity to come back from their opponents’ leads. On the other hand, No. 23 Ole Miss is still being given the benefit of the doubt that it’s a top-25 school despite already having squandered two 20-point leads to Florida State and ‘Bama.

Quarterback Chad Kelly continues to bring firepower to the Rebels offense, which ranks 17th in the nation at 325 passing yards per game, but he’s also accountable for six of the team’s seven turnovers this season. As such, Georgia’s defense could very well give the Rebels a run for their money if its D can indeed put a ton of pressure on the big-armed senior QB.

Writer’s Prediction: Ole Miss’ offense does enough to prevail with the win, but Georgia covers +7.5 with the final score of 31-27. 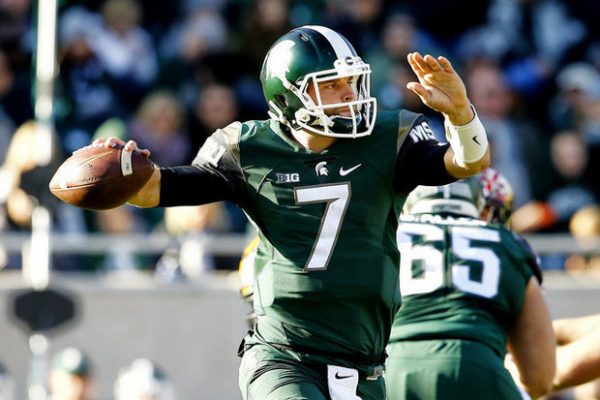 Hard to believe considering that they’re in the same conference, but Big Ten heavyweights No. 11 Wisconsin and No. 8 Michigan State will finally square off against one another for the first time since the 2012 season.

Expect the Spartans to carry their momentum from last week’s 36-28 victory of then-No. 18 Notre Dame and to expose the Badgers’ rotating offensive lineup. Wisconsin will likely be without senior running back Corey Clement for the second-straight contest (ankle), and it appears that freshman QB Alex Hornibrook will start Saturday’s game as well, giving the team less offensive experience to work with. Oh, and Michigan State is also 4-1 (5-0 ATS) in its last five meetings with its Northern rivals.

Although No. 19 Florida is fresh off an unbelievable defensive performance last Saturday by shutting out lowly North Texas, 32-0, and held the team to just 53 yards, Joshua Dobbs and the Vols offense are of a different breed compared to the Gators’ first three opponents. In addition, Florida will now have the less-accurate Austin Appleby under center in place of injured starting QB Luke Del Rio (sprained MCL). Appleby has a rather dismal 2-9 record during his stint as Purdue’s starter.

By the way, the last three contests between these two schools have each been decided by a single point, so it’s not as if the boys from The Keys have totally blown out the Volunteers in the butt-end of their 12-game dominance.

For as long as touted workhorse Leonard Fournette is in their backfield, the visiting Tigers in Week 4 are solidly poised to win their third SEC title and first since 2011 under head coach Les Miles (they’re currently decently priced at +325 to do just that). Fournette returned to action in Week 3 after missing one game due to a sore ankle, and he never missed a step by rushing for 147 yards and a pair of TDs in No. 18 LSU’s 23-20 win over Mississippi State.

On the other hand, the hosting Tigers have yet to seal a victory on their own turf this season, with sophomore quarterback Sean White still putting up relatively pedestrian performances. To cap it all off, Auburn has lost seven of its last nine meetings against Louisiana State (albeit with a peculiar 5-4 ATS record).

Get ready for some fireworks, as Oklahoma State and No. 16 Baylor have had two of the most explosive offenses around this season.

The main difference between these two programs is that the Bears actually have a strong running game in support of its equally-powerful passing attack. Just last week, the team rushed for a whopping 296 yards against Rice, whereas Oklahoma State has been entirely reliant on QB Mason Rudolph’s arm. Furthermore, Okie State has only won one contest over its last four showdowns against its upcoming Big 12 rival on Saturday (2-2 ATS).

This is one rare matchup wherein the running game will possibly trump the passing game. No. 7 Stanford’s feature back, Christian McCaffrey, remains a beast on the ground, gaining 165 rushing yards on 30 carries to go with four catches for 73 yards and a receiving TD in a win against USC this past Week. And last season when McCaffrey last faced the Bruins, he ran for a school-record 243 yards and ended up with a staggering 369 all-purpose yards as the Cardinal won that contest, 56-35.

Meanwhile, UCLA’s sophomore play-caller and strong NFL prospect Josh Rosen already has 917 passing yards for the season. However, he has as many touchdowns as picks as well (four), and will now face a stout Cardinal D that’s ranked eighth in the country having allowed just an average of 11.5 points per game to its opposition.

Writer’s Prediction: Stanford (-3.5)  wins its fourth-straight game against UCLA at the Rose Bowl, 29-21. 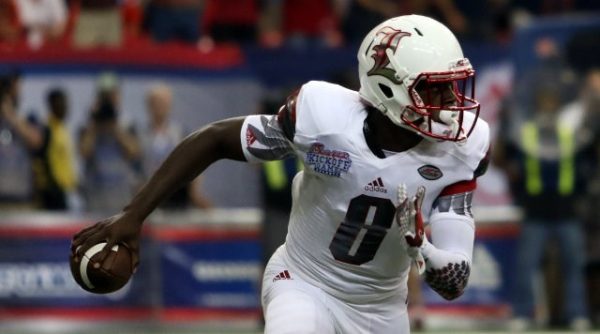 Can anybody stop No. 3 Louisville’s Lamar Jackson? Not even esteemed FSU could slow down Jackson, who is now -250 frontrunner for the Heisman Trophy after putting up surreal numbers both with his arm and his feet. The second-year, dual-threat QB ranks third in all of FBS with an average of 11.1 yards per pass attempt, and he also has 10 rushing touchdowns with a smashing 9.5 yards-per-carry average to boot.

Even though the Thundering Herd program has had great success in the past, 2016 has not been as kind to it. Marshall just got humiliated by middling Akron last week, 65-38, so lord knows what sort of damage Jackson and the Cardinals are capable of doing against the Herd’s paper-thin defense this Saturday night.

A couple of breakout QBs will highlight this upcoming showdown at AT&T Stadium. No. 10 Texas A&M’s quarterback, Trevor Knight, already has 830 passing yards and five TDs this season, but is also completing just 52.9 percent of his attempts. On the flipside, No. 17 Arkansas’ Austin Allen – the younger brother of Razorback great Brandon from last season – is more efficient with his work, having completed 67.1 percent of his passes so far for 655 yards along with a solid 7:2 TD-INT ratio.

Then again, the Aggies have won all four of their previous meetings against the ‘Backs (but an even 2-2 against the spread, though), and having home field advantage is what ultimately tips the scales in TAMU’s favor.

Create a betting account now to cash in from all the hard-hitting college football action this instant!