Once again, the race over in the NL West is the Los Angeles Dodgers’ to lose. However, two teams that underperformed last year are still within striking distance for the top spot of the division’s standings, which has got to worry the best team in baseball at the halfway point of the season.

Read on below for our predictions on how the Dodgers and the rest of the teams out West will finish the regular season.

This season’s Los Angeles Dodgers have a swagger that we haven’t seen in seasons past despite their overall consistency as playoff contenders. They have a plus-163 run differential as we speak, which is the best mark heading into the All-Star break in MLB history, and have lost just four games out of their last 30.

There’s no apparent weakness on Los Angeles’ roster; the team’s pitching staff bookended by studs Clayton Kershaw in the starting rotation and closer Kenley Jansen is still top-notch, and its high-powered offense has even been bolstered by Rookie of the Year candidate Cody Bellinger. Having said that, Los Angeles is without a doubt the safest bet to come out on top of the division.

Prediction: Make that five-straight 90-win seasons and NL West pennants for the Dodgers.

This could very well be the year that the Diamondbacks snap their six-year playoff drought. Five-tool standout Paul Golschmidt, who currently leads the National League in wins above replacement (WAR), is posting MVP numbers and his fellow teammates have caught on with his exemplary form.

And surprisingly, Arizona’s pitching corps is also one of the best in the majors as we speak, ranking second in team ERA (3.41), third in opponent batting average (.235) and fourth in WHIP (1.24). For as long as the likes of Zack Greinke and breakout starter Robbie Ray keep their respective commands in check, the sky’s the limit for the boys from the desert.

Prediction: The D-Backs earned a wild card spot in the playoffs with a record of over 80 wins. 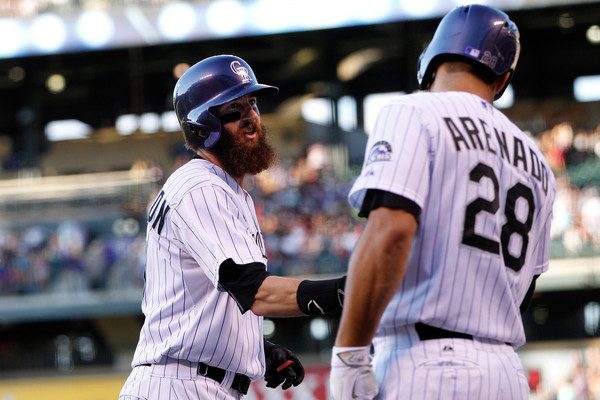 Winners of just five of their last 18 games heading into the All-Star break, the Rockies have sort of lost steam. But still, manager Bud Black has done a fantastic job in his first year in Colorado, getting the most out of the veterans such as Charlie Blackmon and Mark Reynolds and turning them into stars.

The team’s pitching hasn’t been as atrocious as in seasons past either, currently having a middle-of-the-pack unit despite playing in hitter-friendly Coors Field. The Rockies have even won just as many games at home as with on the road (26), and their competitiveness away from Denver may very well be the X-factor that’ll give them their first winning season since 2010.

Prediction: The Rockies join the Diamondbacks in the playoffs as the NL’s other wild card team behind an 80-win campaign.

The Padres haven’t been able to keep up with the strides made by the Rockies and D-Backs because their long-running rebuilding process has failed to develop any positive takeaways.

Middle-relief pitcher Brad hand is the only player representing the Friars at the All-Star Game, which speaks volumes of the limited amount of potential for the team to make a late run in the second half. If that wasn’t enough, San Diego has an MLB-worst minus-128 run differential to date – the only team in the majors with such a triple-digit deficit.

Prediction: The Padres secure back-to-back seasons of under 70 wins to finish last in the division once more.

What a nightmare season this has been for San Francisco. All their wheeling and dealing during the offseason has resulted into one of their worst stretches in recent memory prior to the All-Star break.

The Giants are notorious for their fantastic pitching, but that certainly isn’t the case this year. Their starters have a combined record of 22-43, and perhaps not even the return of injured ace Madison Bumgarner can salvage this group, especially with newly-acquired closer Mark Melancon being a total bust.

If there’s a silver lining to San Fran’s season, it would have to be the bounce-back effort of former MVP Buster Posey. But apart from that, it appears as if the team has no has no remedy available whatsoever to remove its odd-numbered-year curse.

Prediction: The Giants barely end up with a better record than the Padres en route to a disappointing fourth-place finish.

Create a betting account now to start placing stakes on all the intense Major League Baseball action this instant!