As arguably the most stacked division in the NFL this 2017 season, the AFC West has a very precarious group of options when it comes to betting on the over/under of team win totals. Each of the four teams within the division have a realistic chance of making the playoffs, which makes predicting their respective finishes in the regular season all the more hard to gauge.

Nonetheless, here’s our take on how we see the AFC West will pan out after Week 17.

An opportunistic defense that led the league in takeaways last season powered the Chiefs towards their first division title since 2010.

While most of KC’s defense is still intact, the same could not be said about the team’s already middling offense. Franchise back Jamaal Charles is gone (more on him later), as well as top wideout Jeremy Maclin. Then again, the Chiefs’ conservative approach on offense was still enough to win them 12 games last season, and that was with both Charles and Maclin missing significant time due to injuries.

Plus, the Chiefs’ stellar D was able to shut down their rivals time and again en route to going a perfect 6-0 in the division and edge out the Raiders for the division crown with their identical records. Those six wins from the West accounted for half of the team’s victories, and that’s a huge deal. As such, a double-digit winning campaign this time out isn’t far from happening again.

Writer’s Prediction: At least 10 wins for Kansas City is highly probable, so taking the OVER appears to be the wiser decision.

The Raiders are joined at the hip with the Chiefs in terms of last season’s win total and this year’s win total projections, but could not be more opposite with their respective styles of play.

Oakland’s re-emergence in football relevance can be attributed to quarterback Derek Carr’s phenomenal campaign. Carr led the best offense in the division en route to the team’s first playoff berth in 14 years, and this season’s made all the more special for the Silver and Black faithful with hometown hero Marshawn Lynch coming out of retirement to join the Raiders backfield.

Even though many are speculative of Lynch’s capability of being the team’s new feature back considering his age, coupled with very little action during the offseason to improve their rather porous defense, the Raiders are still in good shape will Carr running the show. They’ll also be highly motivated to produce solid shots at winning a title in the Bay Area before they move the entire franchise to Vegas in a few years’ time.

Writer’s Prediction: The Raiders are our pick to win the AFC West, leaving us confident to take the OVER for what could be another 12-win season. 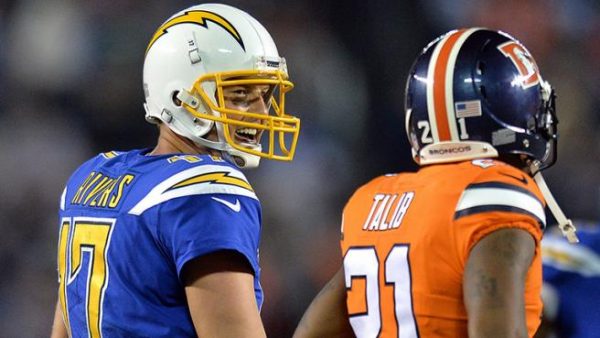 Unlike the Chiefs, the Broncos’ formidable defense wasn’t enough to carry its lackluster offense to a postseason appearance last year following the team’s Super Bowl-winning run in 2015.

Neither Trevor Siemian nor Paxton Lynch have been able to come close to Peyton Manning’s high standards from seasons past yet, and the rushing attack also looks questionable this 2017 with oft-injured running backs C.J. Anderson and recently-signed Jamaal Charles as Denver’s top RB options.

Even the defense struggled against the run last year, offsetting the good ground covered by its fantastic secondary. Having said that, the Broncos are a few pieces on offense and the D’s front seven away from being considered as a lock for playoff contention once more.

Writer’s Prediction: A .500 record might be in store for the Broncos, making the UNDER a safer bet.

Eight wins for the recently-relocated Chargers seems like a lofty goal, especially considering the track record of teams underperforming in their first year playing in a new city – the neighboring Rams from last season and the Tennessee Oilers/Titans from the late 90’s as the most recent cases.

The Bolts had an underrated defense and a relatively high-powered offense in 2016, but franchise quarterback Philip Rivers is starting to show his age with the huge number of turnovers he’s been held accountable for. A wealth of weapons at wide receiver does make Los Angeles an offensive threat, but Rivers’ propensity to get picked off will somehow negate that advantage. Two of the three teams in the West (Chiefs and Broncos) will likely expose this weakness again, and the Raiders can fight fire with fire with their more prolific passing game as well.

Writer’s Prediction: Another five-win campaign seems like a low bar for the Chargers, but ending the 2016 regular season with a losing record is still the more probable outcome. We’re taking the UNDER.

Create a betting account now to start placing stakes on some NFL futures before the regular season officially kicks off this fall!