The animal kingdom failed big time in their picks last year, with 7 of 9 “experts” picking the 49ers to take Super Bowl LIV. They also fumbled in their picks for the 2019 Super Bowl, with 6 of 8 picking the Rams to win over the Patriots. So it would seem that the smart money for Super Bowl 55 will back whomever the fuzzy, furry, feathery, and slippery minority picks this time around. Or are our favorite zoo residents from around the U.S.A. due for a win here in 2021? History also shows that they typically pick the underdog, but with just a slight 3-point spread holding in favor of the Chiefs and the fact that Tom Brady is on the other side of that coin, there is no sure bet. That means you need all the help you can get, so let’s find out what the animals have to say about this coming Sunday. 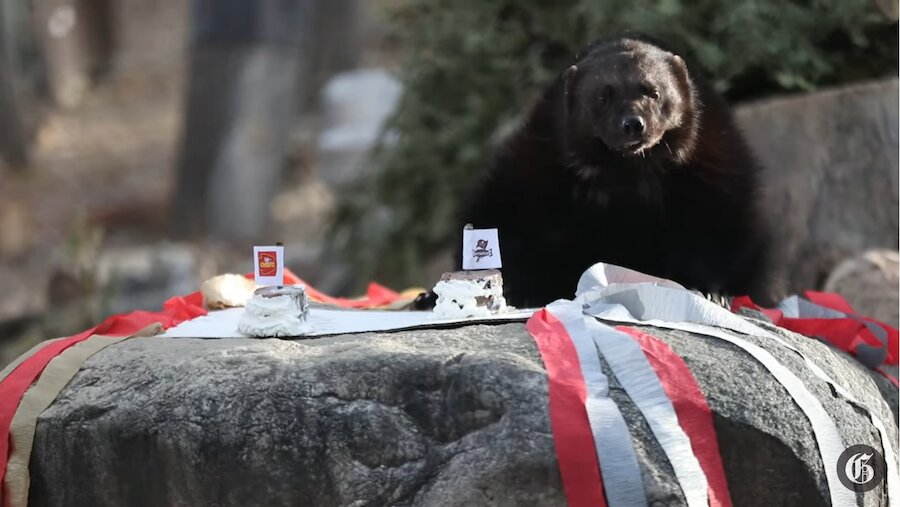 Ozzy the Grizzly Bear is typically ZooMontana’s go-to for Super Bowl picks but we have a new entry from this Northwestern state in the form of Sid the Wolverine.  Sid came out guns blazing, ripping out of this pen to gobble up the goodies bearing the Buccaneers flag. What about Ozzy? The old Grizz’ has officially retired with a 7-2 record. Will Sid carry on Ozzy’s (and ZooMontana’s) legacy with his first prediction? We’ll find out this Sunday! 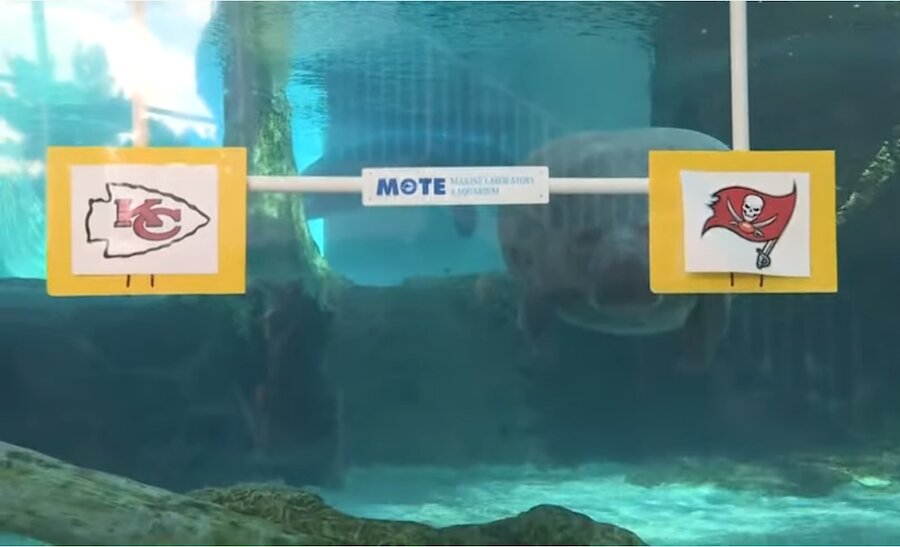 Sarasota Florida’s Mote Marine Laboratory and Aquarium’s Buffett the Manatee, who has a 10-2 Super Bowl record, has picked the Tampa Bay Buccaneers to take it all on Sunday. The same goes for the manatee’s furry little friend Jane the river otter, who also picked the Bucs. But before you chalk it up to local resident bias, take note that the aquarium’s other resident manatee (Hugh) and otter (Pippi) went with the Kansas City Chiefs. Looks like the experts at Mote are split with their picks. 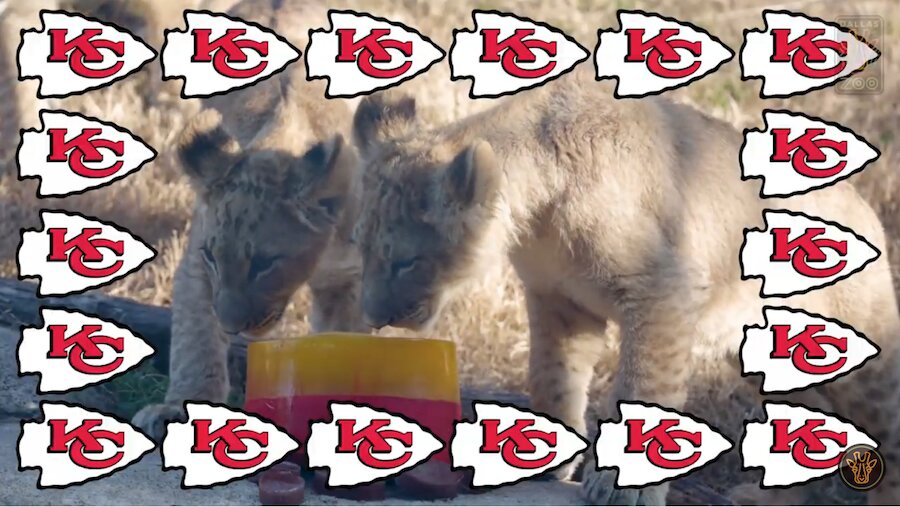 After the Dallas Zoo’s resident tiger Kuasa failed by picking the 49ers for Super Bowl LIV they decided to go with some fresh whiskers this year. Tempted by frozen Jell-O treats the adorable yet-to-be-named cubs devoured the Kansas City Chiefs, for the win. 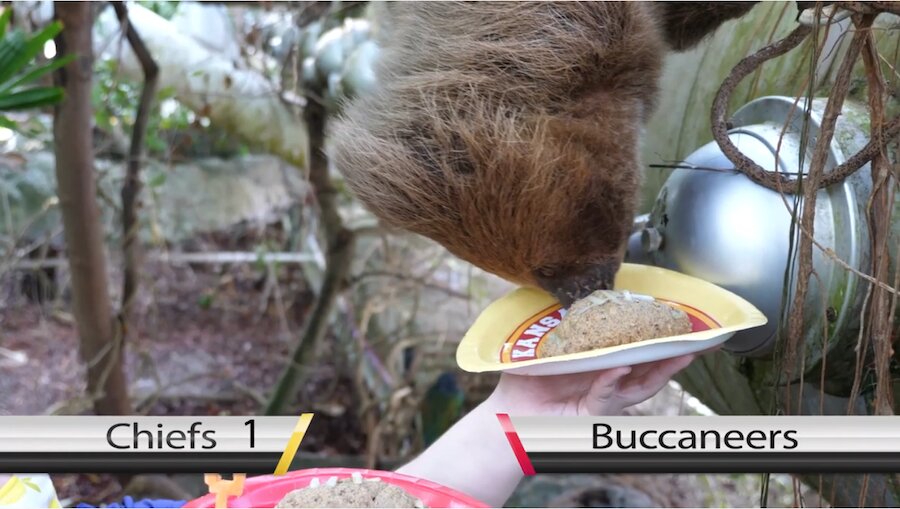 Galveston’s Moody Gardens’ own Carlton the Sloth took his time but made this pick for Super Bowl LV this passed weekend. He went straight for the Chiefs, took a few bites, left for a brief break (eating is soooo exhausting), and came back to gobble up from the Chiefs once again. Carlton then wandered around his tree some more, and came back for yet another bite from Kansas City’s offering – just in case there were any doubters. This sharp bettor picked KC three times, suggesting that the 3-point favorites are indeed the smart wager this Sunday. 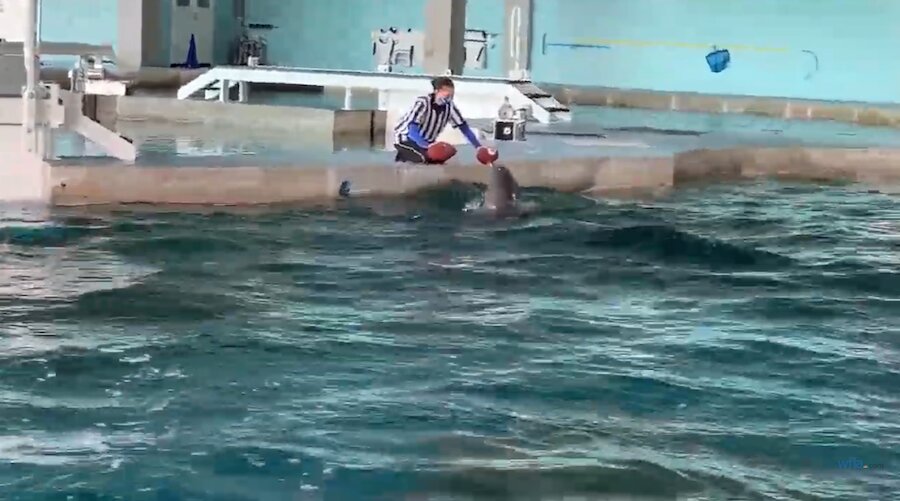 Clearwater Marine Aquarium’s most popular resident Nicholas the Dolphin seems to have turned on the home team, swimming up to the on-site ref to pick the football marked with the Kansas City Chiefs’s logo.

She nailed the pick last year and did it again here in 2021. The Memphis Zoo’s panda LeLe came out of her cave, climbed her perch where team logo flags awaited her attention, and proceeded to pick the Kansas City Chiefs .

The Maritime Aquarium in Norwalk, Connecticut has replaced Porter the Harbor Seal (Moody Gardens, Galveston) on this annual list with their own adorable Leila. It wasn’t exactly the most confident pick, as the staff stuck way too many logos on to her glass-encased home to draw a definitive conclusion, but at this point any backing that the Buccaneers can get is welcome for Tampa Bay fans.

Cincinnati Zoo is home to one of the most famous Super Bowl pickers in America – Fiona the hippopotamus. Cuteness must be the primary factor here, as her record isn’t great, currently 1-2 in straight-up (SU) picks over the last three years. She predicted a 49ers win last season. This year Cincinnati Zoo claims that she has picked the 3-point underdog Buccaneers by knocking down their barrel first. But can’t it be construed to mean the opposite? We’ll give the Bucs the benefit of the doubt on this prediction, but in the end you will need to be the judge.

At press, the wild kingdom likes the Chiefs with a 6-5 record in favor of Kansas City. Stay tuned for daily updates as zoo animals, popular pets, and other critters across America weigh in with their picks. Now that you’re armed with the expert opinions above, are you ready to make your own Super Bowl LV predictions? Register to do so and make your NFL wager here.