Best Games to Bet On Today: Duke vs. Texas A&M & Blazers vs. Thunder

The final day of 2013 could also be Johnny Football’s final game in an Aggies uniform. Will he sign off with a win in the Chick-fil-A Bowl? And in the NBA, the Blazers are eager to snap their first losing skid of the season, but can they topple the shorthanded Thunder in OKC?

2013 was a banner year for the Duke football program. The Blue Devils won 10 games for the first time in over 90 years. They won the ACC Coastal Division, earning them the right to face national title game finalists Florida State. In the ACC Championship Game, Duke was the first team to hold the Noles scoreless in the first quarter all year. [sc:NCAA240banner ]

Although ultimately falling in defeat, Duke is still an impressive 8-1 SU in its last 9 games. On offense, junior receiver Jamison Crowder (96 catches, 1,197 yards) is the obvious game-changer who could deliver the Blue Devils their first bowl win since 1960.

On the other side, year two – which could likely be the last year – of the Johnny Football experience wasn’t as spectacular as the first. The Aggies dropped to 8-4 this season, losing to all ranked teams – and all SEC teams – that they faced. Their back-to-back defeats at LSU and Mizzou marked the first losing streak in the Johnny Manziel era.

Manziel himself improved several key stats (passing yards per game, completion percentage, passing TDs) from his Heisman-winning freshman season. However, he was ineffectual in the last two games of the season, completing below 50% passing and committing 2 INTs against LSU, and throwing below 200 yards versus Mizzou. The total has gone OVER in 8 of Texas A&M’s last 12 games. 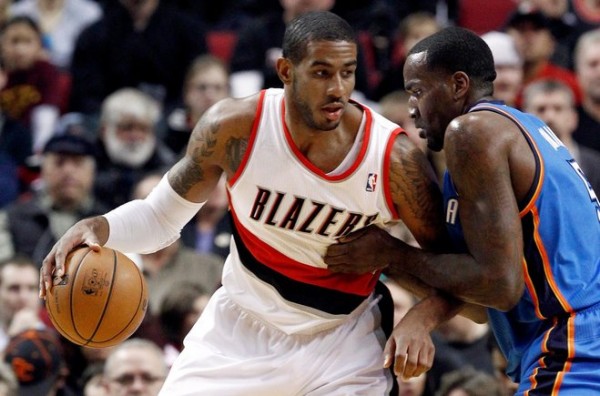 A first losing streak of the season has knocked the Portland Trailblazers off their perch atop the Western Conference. Their two defeats came via last second heroics from the Heat’s Chris Bosh and the Pelicans’ Tyreke Evans.

The Blazers are still comfortably the highest scoring team in the league at 108.6 points/game, but their inability to stop the other team from scoring is becoming a concern. Portland hasn’t held an opponent under 100 points in nine straight games.  The Over is 4-0 in the Trail Blazer’s last 4 road games.

The Thunder have replaced the Blazers as the leaders of the West, but it’s not all good news in Oklahoma City. Russell Westbrook will again miss significant time with yet another knee injury.

However, the Thunder have won both games without their All-Star guard as Reggie Jackson and Jeremy Lamb have continued their great play. The two combined for 38 points as the Thunder blew out the Rockets at home on Sunday. OKC is now tied with Indiana with an NBA-best 14-1 SU record at home.