NFL Week 11 features a batch of interesting games, from divisional match-ups to the most anticipated showdown of this 2013 season between the undefeated Chiefs and the most likely candidates to ruin their streak: Peyton and the Broncos.

You can bet on all these teams and more over at the Top Bet Sportsbook.

Here are the top 5 NFL teams to bet on this week:

*All odds as of November 13 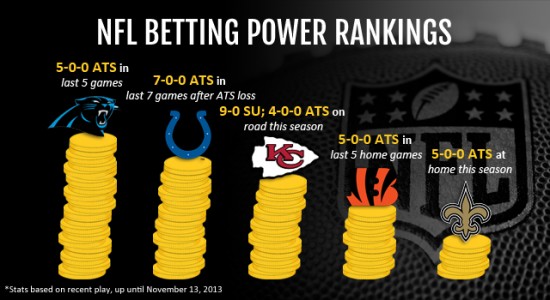 The Carolina Panthers are rolling right now, having won five consecutive games, both straight-up and against the spread.

Their hard-fought 10-9 victory over the 49ers proved that this team is for real. They face another challenge in Tom Brady and the New England Patriots. With Brady regaining his form after a Brady-like performance two weeks ago, expect the elite defense of the Panthers to dampen the offensive rhythm of the Pats.

Tack this one on as well: the Panthers are 4-1 ATS in their last 5 meetings.

The Indianapolis Colts didn’t know what hit them when the St. Louis Rams went into their stadium and completely destroyed them. The bright side of this is bettors know that these Colts always bounce back in the next game (7-0-0 ATS after ATS loss since 2012).

Fortunately, the Colts will get their chance to get back to action quickly when they visit the Jake Locker-less Tennessee Titans this Thursday night. 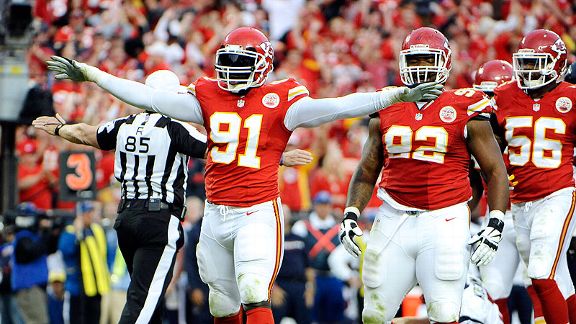 Now for the game football fans have been waiting for: at Sports Authority Field at Mile High in Denver, Colorado, it’s the 9-0 Kansas City Chiefs visiting the 8-1 Denver Broncos this Sunday night. [sc:NFL240banner ]

The Chiefs have been the biggest surprise of the season and they will put their undefeated streak on the line in their toughest game yet. They say that in order to win on the road, a team must know how to defend, and defense has been the Chiefs calling card.

Thanks to their elite defense, the Chiefs are 4-0-0 ATS on the road this season and they have all the tools to counterbalance the high-octane offense of the Broncos.

Although they are leading the AFC North, the Cincinnati Bengals have been inconsistent this season and have lost their last two games. They’re good, but they still have a lot to work on.

The good news for them is that they are going back home for a key divisional match-up against the Cleveland Browns. The Bengals would be glad to be back in The Jungle, where they are 5-0-0 ATS in their last 5 games at home. Remember when they dismantled the Jets in Week 8? One might expect that from the Bengals against the Browns.

The New Orleans Saints put on a show in the Superdome against the Dallas Cowboys where they went for 49 points and an NFL-record 40 first downs.

With another dominant win at home, the Saints improved to 5-0-0 ATS at home this season and will host the visiting San Francisco 49ers on Sunday afternoon. The Saints are dominant at home, as shown in their +20.2 point-differential in their five home games this season.

The Saints could light up the Superdome once more against the Niners.