Best Games to Bet on Today – Mavs vs. Spurs & Warriors vs. Nets

The Golden State Warriors are one win away from a perfect seven-game road trip. Can the NBA’s hottest team complete the sweep in Brooklyn tonight? Plus, Dirk and Duncan collide for another Texas showdown. 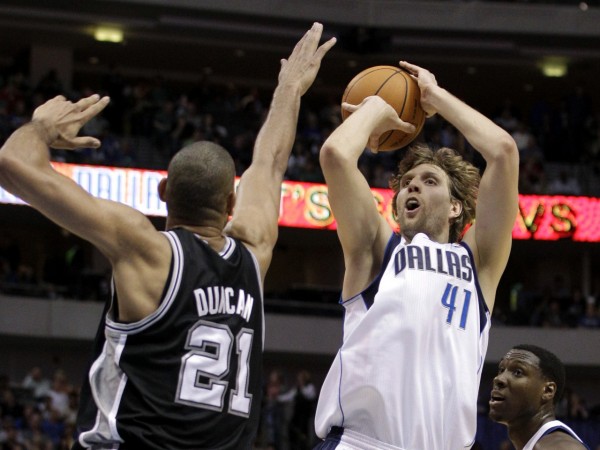 The Dallas Mavericks finally snapped a rare two-game home losing streak last night with a comfortable 110-97 win over the Los Angeles Lakers. Dirk Nowitzki led the way with 27 points for the Mavs, who are currently 8th in the Western Conference. Despite their losing streak, Dallas is still a better home team SU, but still dependable on the road. The Mavs are 7-3 ATS in their last 10 road games.

They face the neighboring San Antonio Spurs, who will be playing the second night of back-to-back games after a 110-108 overtime win over the Memphis Grizzlies. Manu Ginobili scored the winning lay-up. [sc:NBA240banner ]

San Antonio is 5-0 SU in its last 5 games against the Mavs.

The Golden State Warriors are by far the hottest team in the NBA at the moment. They are 10-0 SU in their last 10 games, including an impressive road win in Miami. Now the Warriors have shot up to 4th in the West. Their resurgence has coincided with the return of defensive stopper Andre Iguodala. Golden State is 11-1 SU since his return from a hamstring injury.

The Brooklyn Nets, 3-0 SU in their last 3 games, are on a hot streak, themselves. A combination of Joe Johnson’s game-winner, Deron Williams’ play, and Jason Kidd’s no-necktie look has propelled the Nets to within just half a game out of a playoff spot in the Eastern Conference. However, Williams will be out against the Warriors with an ankle injury.