Buffalo’s defense played well enough to halt the New England Patriots scoring streak at 38 quarters. But couldn’t make enough plays on offense for the upset. The Bills will need to get over their 20-13 loss quickly when they take on the surging Kansas City Chiefs in Week 12 on Sunday. The Chiefs have won four straight and are knocking on the door to playoff contention as a Wild Card team. Can they get business done at home against the defensive Bills?

There’s plenty more football to go around. Check out our complete previews for the Patriots vs. Broncos and Cardinals vs. 49ers.

Betting on the Buffalo Bills (5-5)

The Buffalo Bills’ two-game winning streak was put to a halt after losing to Tom Brady and the New England Patriots on Monday night. The Bills had a sound defensive performance, limiting the defending Super Bowl champions—who had averaged a league-high 33.7 points per game prior to Week 11—to just 20 points.

The Bills had a handful of costly mistakes that prevented them from the upset. Running back LeSean McCoy dropped a would-be receiving touchdown in the second quarter. One play later, Dan Carpenter missed a 48-yard field goal to hand New England good field position for a touchdown drive. Return specialist Leodis McKelvin fumbled a punt return in the third quarter, which resulted in a Patriots field goal.

[sc:NFL240banner ]Despite dropping a touchdown pass, McCoy still had a solid overall game. He had 82 yards on 20 carries including a 27-yard scoring run and caught six passes for 41 yards to surpass 100 yards from scrimmage for the fourth straight game. But McCoy may have his hands full against one of the league’s best defenses in Kansas City. The Chiefs are ranked seventh in total defense, allowing just 327.4 yards per game.

Quarterback Tyrod Taylor will need to get the ball to two of his top targets, wide receiver Sammy Watkins and tight end Charles Clay, if the Bills are to carve up the Chiefs’ defense. Watkins and Clay were held to 39 and 14 yards receiving respectively on Monday night. Taylor threw for 233 yards against the Patriots. Wide receiver Chris Hogan gave him a solid target with six catches for 95 yards.

On the other side of the ball, the Bills could have a very good day in hounding Chiefs quarterback Alex Smith. He’s the third-most sacked quarterback in the league with 33 through Week 11. The Bills repeatedly put the pressure on Patriots quarterback Brady on Monday night, forcing the reigning Super Bowl MVP to a season-low 51.3 percent completion rate.

Betting on the Kansas City Chiefs (5-5) 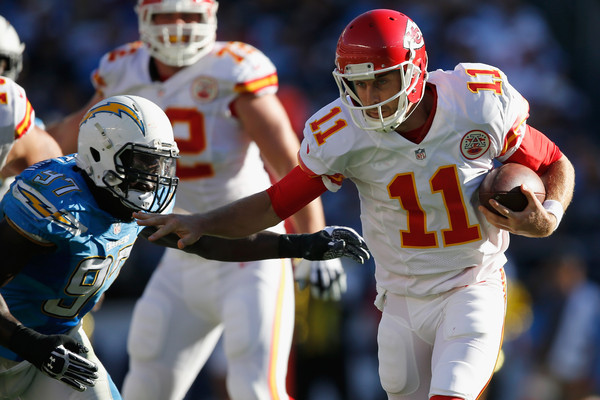 The Kansas City Chiefs enjoyed a thorough beatdown of San Diego, taking a 33-3 win at Qualcomm Stadium. Quarterback Alex Smith was very accurate with his passes, completing 20 of 25 for 253 yards, but could not find the end zone. But the running game and defense were good enough to give the Chiefs the victory.

Backup running back Spencer Ware had his biggest game to date, rushing for 96 yards on 11 carries including two scores. Even 346-pound defensive tackle Dontari Poe had a scoring run, diving over a pile on fourth down. With running back Charcandrick West day-to-day due to a strained hamsting, Ware may be given the lion’s share in the backfield. But he may struggle to gain much ground against a pretty solid Buffalo rushing defense.

The Chiefs may need Smith to air out the ball to get past Buffalo. He’ll need to find his playmakers tight end Travis Kelce and Jeremy Maclin for big gains. Kelce leads the team with 620 yards and three touchdowns, while Maclin is a step behind with 612 yards and two scores. But they have struggled thus far, each failing to top 50 yards for three straight games.

Kelce was held to just 46 yards against San Diego, while Maclin had 29 yards. But they’ll fancy their chances against a Buffalo pass defense, which has allowed 253.8 yards per game.

On the other side of the ball, Kansas City may have a big day on the pass rush. The Bills have allowed 29 sacks this season, the ninth-most in the league. The Chiefs have just the man to get past Buffalo’s patchy offensive line: linebacker Justin Houston. He ranks fifth in the NFL with 7.5 sacks. Houston showed another dimension in his skills with a 17-yard pick-six against the Chargers on Sunday, the first touchdown of his career.

The Chiefs are 4-0 SU/ATS in their last four games.

The Chiefs outduel Buffalo in a tight game that goes to the wire. Create a betting account now and get the most of the remaining NFL action.