It’s a short week for both the Buffalo Bills and the New York Jets, as they’ll be back on the field this coming Thursday for a tasty matchup of two AFC East wild-card hopefuls. The Bills are coming off a nice victory in South Beach to start a four-game road trip. The Jets, on the other hand, are also fresh off a win, taming the Jacksonville Jaguars at home.

For more Week 10 game previews, you can also read our breakdown of Browns vs. Steelers and Tigers vs. Packers.

Betting on the Buffalo Bills (4-4)

[sc:NFL240banner ]Sammy Watkins walked the talked and played like the first-round selection that he was last year, while Karlos Williams came back from a three-game absence and wowed, as the Bills beat Miami on Sunday 33-17.

After going off on social media more than a week ago, Watkins had his best game of the season, catching all eight targets for 168 yards and a touchdown. With Percy Harvin now out for the season, there’s a lot on the shoulders of the Clemson-product moving forward. It’s likely that Watkins would get the Darrelle Revis treatment on Thursday. In that case, Tyrod Taylor, who passed for only 181 yards and a touchdown on a measly 11 of 12 attempts, will have be forced to incorporate Charles Clay and Robert Woods in the passing attack more often than usual against the Jets. Clay only had a catch for six yards in the Miami game, while Woods turned into a ghost, recording no yardage on just one target.  Clay, however, leads the Bills with 34 receptions and 350 receiving yards.

Williams, on the other hand, clearly wasn’t bothered by a previous concussion, as he racked up 110 rushing yards and added two touchdowns on nine carries. He was a terrific backup to LeSean McCoy, who had 112 yards and a touchdown. Buffalo’s backfield, along with its passing attack, however, will have to find balance in order to confuse New York’s highly regarded defense that ranks 12th in the league with only 19.9 points allowed per game.

Buffalo is 3-1 SU and ATS in its last four road games. 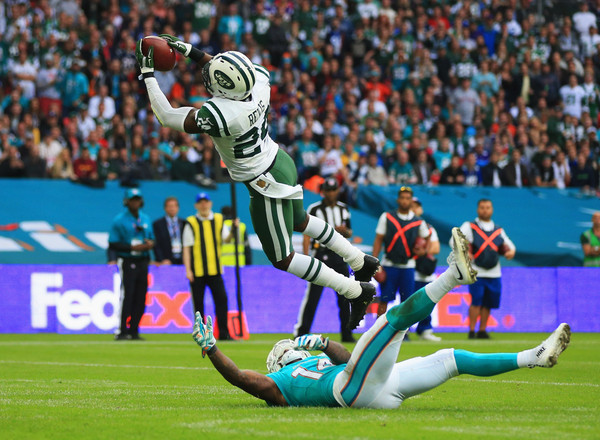 Following back-to-back losses, the Jets are now back in the win column, thanks to a 28-23 victory over Jacksonville on Sunday.

Ryan Fitzpatrick played well despite nursing a torn ligament in his left thumb, passing for 272 yards and two touchdowns on 21 of 34 completions. Fitzpatrick was on the same page with his top two receivers, with Eric Decker and Brandon Marshall each having a touchdown reception.  Like Buffalo’s Watkins, both Decker and Marshall may have a tougher time catching passes on Thursday, given Buffalo’s above-average secondary. So far this season, the Bills are tied for seventh in the league with eight interceptions.

But what’s more worrisome for New York was the bad performance of its backfield in Week 9. The Jets—seventh in the NFL with 127.6 rushing yards per game—were held by the Jaguars to only 29 yards on the ground. Chris Ivory, in particular, had a forgettable outing, as he ran for only 26 yards despite 23 carries. It’s not about to get easier for Ivory and company, as the Bills aren’t exactly generous to opposing backfields. Buffalo is giving up 91.9 rushing yards per game.

That means extra pressure on Fitzpatrick and the Jets’ passing attack to carry the team. Fitzpatrick enters Thursday’s ballgame with 1,518 passing yards, 11 touchdowns and seven interceptions.

New York is 5-2 ATS in its last seven home games.