Read on for a comprehensive preview of this very intriguing matchup below. Meanwhile, check out more top bowl matchups with our previews of the Russell Athletic Bowl (North Carolina vs. Baylor) and the Texas Bowl (LSU vs. Texas Tech).

Cal came out of the gates hot this season by winning its first five games, which included road wins over Texas and Washington. But the Bears’ bullish start turned out to be a bit of fool’s gold, as they lost their next four Pac-12 game. Cal went just 1-5 ATS in its final six games of the season.

[sc:NCAA240banner ]Nevertheless, this season should be considered a decent success, seeing as head coach Sonny Dykes has them playing in their first bowl game since 2011.

It’ll be stud quarterback Jared Goff’s first and last bowl game as a Golden Bear, as he prepares to take his undoubted talents to the NFL. But his presence alone gives Cal a big chance to win its first bowl game since 2008.

Goff was nothing short of great at times for Cal this season. He finished fifth in the country in passing yards per game (354.3) and third in touchdown passes (37). Goff had his struggles against the tougher teams in the Pac-12, but he was simply sparkling against teams closer to Cal’s level.

He torched Oregon State for 453 yards and six touchdowns in a 54-24 Cal win. He then had a career-high 542 yards and five TDs a couple weeks later to lead the Golden Bears to a dramatic 48-46 win over Arizona State in their final regular season game.

Cal had its issues on defense – it finished 88th in scoring defense, giving up a shade over 30 points per game – but the explosive nature of its offense and the ability to put points on the board in a hurry will make it tough for Air Force to keep up. 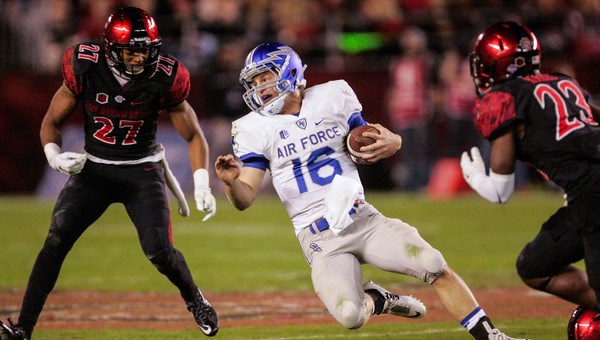 After winning 10 games for the first time since 1998 last year, Air Force had another strong season under Troy Calhoun as the Falcons won their division and challenged for the Mountain West Conference title. However, they came up agonizingly short in a 27-24 loss to San Diego State, who went undefeated in conference play.

Despite their name, the Air Force Falcons don’t employ a pass-happy offense; they are actually the exact opposite, as they own the second most prolific ground-based attack this season (322 rushing yards per game, 42 rushing touchdowns).

Their ground game should be able to find sustained success against a Cal front that is way down in 103rd in run defense (203 rushing yards allowed per game). That effective, run-heavy offense will be a good form of defense for Air Force, as it can keep Cal’s explosive offense off the field for long stretches.

The Falcons’ pass defense has also been one of the more reliable parts of their game. It likely won’t limit Cal’s Jared Goff to their season average of 190 passing yards (23rd in the country), but it can slow the Cal air raid down just enough, giving the Falcons an excellent chance of at least keeping within a touchdown of the Bears.

Air Force is 6-1 ATS in its last seven games, while the over has also gone 6-1 during that stretch.