There’s just no stopping Carolina right now. The Panthers extended their regular season win streak to 17 games with a resounding victory over Atlanta on Sunday. They will look to stretch that unbeaten run even further when they take on the New York Giants in a mouth-watering showdown at MetLife Stadium.

Who will grab the edge in this pivotal clash? Read on below for an in-depth breakdown of this NFC matchup and while you’re at it, you can check out our Week 15 previews of Indianapolis vs. Houston and Denver vs. Pittsburgh.

Betting on the Carolina Panthers  (13-0)

The Carolina Panthers will head to their showdown against New York with momentum on their side after crushing the Atlanta Falcons, 38-0, on Sunday. It was another one-sided victory for the Panthers, who have now clinched a first round bye in the NFC playoffs.

[sc:NFL240banner ]To no one’s surprise, it was Cam Newton who spearheaded the Panthers’ charge against the Falcons. He completed 15-of-21 passes for 265 yards and three touchdowns as he finished the game with a near-perfect passer rating of 153.3. Newton has 13 passing touchdowns in his last four games, and that includes a no-touchdown performance against Dallas on Thanksgiving.

Carolina will look to sustain the momentum of that huge win when it takes on the New York Giants this coming Sunday. For the Panthers to preserve their unblemished slate, they will need to continue their excellent play on the defensive end. Their 38-0 victory against Atlanta was their first shutout win since September 22, 2013. 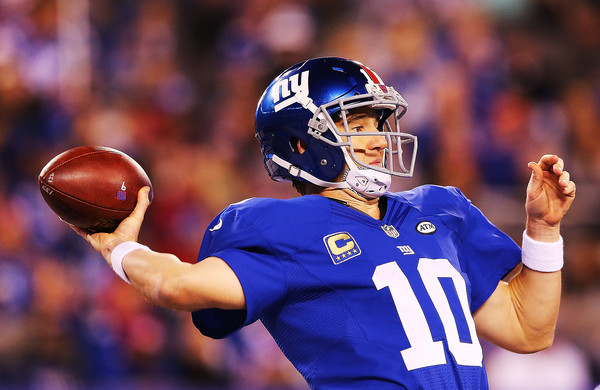 The New York Giants finally snapped their three-game losing streak with a heart-stopping 31-24 win over the Miami Dolphins on Monday. It was a crucial victory for the Giants, who forged a three-way tie atop the volatile NFC East.

Starring for the Giants in this critical road win was Eli Manning. The two-time Super Bowl champion had his best game of the season, completing 27-of-31 passes for 337 yards and four touchdowns. Manning’s passer rating of 151.5 was his highest since 2009.

Another guy who stepped up for New York on Monday was Odell Beckham Jr. He had seven catches for 166 yards and two touchdowns, including a monster 84-yarder that swung the game in the Giants’ favor. It’s Beckham’s sixth-straight game with more than 100 receiving yards, and he now has eight touchdowns in those six outings.

The Giants will look to make it back-to-back wins when they take on the undefeated Carolina Panthers this coming Sunday. However, Manning and Beckham will have their work cut out for them against a Carolina secondary that’s allowing just 223.2 yards per game through the air this season, fifth-lowest in the NFL. That won’t faze the Giants, though, who are sixth in the NFL in passing offense, averaging 272.0 yards per game this campaign.

The Giants also need to buckle down on the defensive end if they are to inflict Carolina’s first defeat. The Panthers’ 38-0 victory over Atlanta was Carolina’s fourth consecutive 30-plus point effort, and it was also the sixth time this season that the Panthers have topped the 30-point mark. That will be a major concern for a Giants team that’s 32nd in the NFL in total defense, allowing a whopping 418.6 yards per game this season.

The Giants are 3-3 SU and ATS at home this season.

Carolina (-5) preserves its unbeaten slate with a 35-24 victory.