There’s a big game awaiting the Houston Texans and the Indianapolis Colts next Sunday. On the line is the solo lead in the AFC South at this crucial juncture of the season, as both teams are currently sitting on identical 6-7 records.

Read on for a breakdown of this huge matchup. For more Week 15 game previews, you can also read our analysis of Jets vs. Cowboys.

Betting on the Houston Texans (6-7)

[sc:NFL240banner ]The Texans are back to being a sub-.500 team after they were beaten by the Patriots on Sunday, 27-6. The sound beating at the hands of New England was a painful reminder for Houston that it still lacks punch on its offense to be considered a legitimate contender at least in the AFC.

With Brian Hoyer orchestrating the attack, the Texans were only able to come up with 189 total yards and just one trip to the red zone. Hoyer passed for only 102 yards, while the backfield burned rubber for a measly 87 more.

Perhaps Hoyer is bound to have a better performance next week against Indianapolis’ defense which he carved up for 312 passing yards and two touchdowns in the first meeting—a 27-20 loss back in Week 5. DeAndre Hopkins was the biggest thorn in the side of the Colts’ defense in that game, as the wide receiver caught 11 passes for 169 yards. Indianapolis’ defense has been a wreck this season, and is allowing 276.2 passing and 121.4 rushing yards per game, 29th and 25th in the league, respectively.

Houston’s defense, meanwhile, has to create a game plan focused on jamming Indianapolis’ passing attack now that Andrew Luck is reportedly on track to start this coming Sunday.

Jadeveon Clowney looks to be of help this time around after having two sacks in the New England game. It was the first time the 2014 first overall pick had more than a sack in one game in his NFL career. Thus far this season, the Texans are 17th in the NFL with 30.0 sacks, which includes the three quarterback takedowns they had against the Pats.

Houston is 2-2 SU and ATS in its last four road games.

Betting on the Indianapolis Colts (6-7) 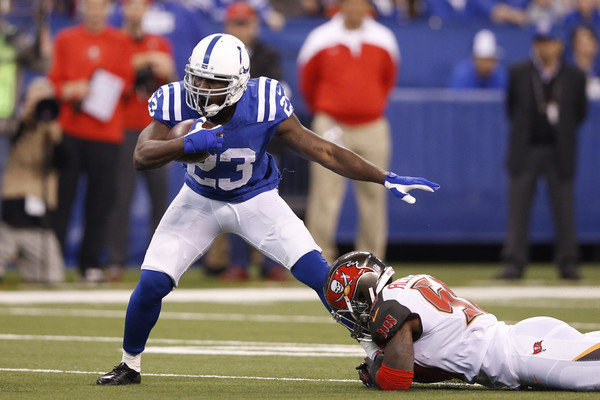 Say what you want to say about Matt Hasselbeck, but it’s hard to deny that he’s playing impressively for a man his age. That said, Hasselbeck looked prime for retirement on Sunday, when Jacksonville bludgeoned the Colts, 51-16. The humiliating defeat to a team they have long dominated may cue the Colts to call on Andrew Luck to return and take over the starting gig away from Hasselbeck.

The Colts’ problems, however, is more than just about Luck’s health. They also need to address issues on their defense, one that was pulverized by Jacksonville. The Jaguars were like a kid let loose in a toy store, getting everything they want, as Blake Bortles and company finished with 444 total yards. Bortles, in particular, threw for 250 yards and three touchdowns without an interception.

Indy’s secondary will have to be better next week against Houston, as the Texans are always dangerous in the passing game in spite of their own quarterback issues so long as they have the extremely talented DeAndre Hopkins downfield.

Should Luck be back under center this coming Sunday, the Colts’ offensive line definitely has to be in its strongest form. Whether it’d be Luck or Hasselbeck starting, the O-line can’t afford to relax a bit, considering J.J. Watt’s presence on the other side. The Colts’ have allowed 31 sacks on the season, 21st in the NFL.

Indianapolis has yet to lose to the Texans at home since Houston joined the league in 2002. The Colts are 13-0 SU and 8-4-1 ATS in Indy during that span against the Texans.