The Baltimore Ravens are sitting in the cellar of AFC North as the only team in the division yet without a win. They start a set of three-straight division games by welcoming the Cincinnati Bengals to Baltimore for their home opener. The Bengals, meanwhile, have been to a roaring start with a blowout of Oakland and a tight victory over San Diego.

It’s going to be one hell of a matchup between the Ravens and Bengals, who both finished with 10 wins last season. A couple of big divisional matchups will also be in play next week in the Saints vs. Panthers and Bills vs. Dolphins.

Quarterback Andy Dalton put his horrible 2014 AFC Wild Card game performance behind him, and went out to a roaring start in this year’s regular season. Dalton passed for two touchdowns in a season-opening win on the road against the Oakland Raiders. Then he topped that performance by throwing three scoring passes, each to different receivers at home against San Diego in Week 2.

[sc:NFL240banner ]A boost in the receiving corps has given Dalton plenty of weapons to choose form. Tight end Tyler Eifert is finally healthy after a season-ending injury took him out of last year’s Week 1 matchup against the Ravens. Eifert has been one of Dalton’s favorite targets in the red zone, catching three scoring passes, including one against San Diego, thus far this season.

Eifert’s rise doesn’t mean that last year’s leading receiver A.J. Green will be slowing down any time soon. Green caught three passes for 45 yards as he hauled in one of Dalton’s scoring passes in Week 2, while Marvin Jones caught the other one of Dalton’s TDs on Sunday. Dalton and his receiving corps should have a big day against a Baltimore defense that was just torched for three passing touchdowns against Oakland last week.

The Bengals also have a pretty solid running game. Week 1 starter Jeremy Hill lost two fumbles against the Chargers, but his replacement in Giovani Bernard couldn’t have had a better game in his place, rushing for 123 yards on 20 carries.However, Cincinnati’s rushing offense may not amount to much against the Ravens’ excellent front seven. Baltimore has limited its opponents to rush for just 83 yards per game this year.

Cincinnati happens to have an excellent pass rush on the other side of the ball, one which could prevent Baltimore quarterback Joe Flacco from throwing deep downfield, or prevent running back Justin Forsett from running for significant yardage. Defensive end Carlos Dunlap leads this unit after collecting 2.5 sacks through the first two games of the season.

The Bengals are 4-1 SU/ATS in their last five games against Baltimore. 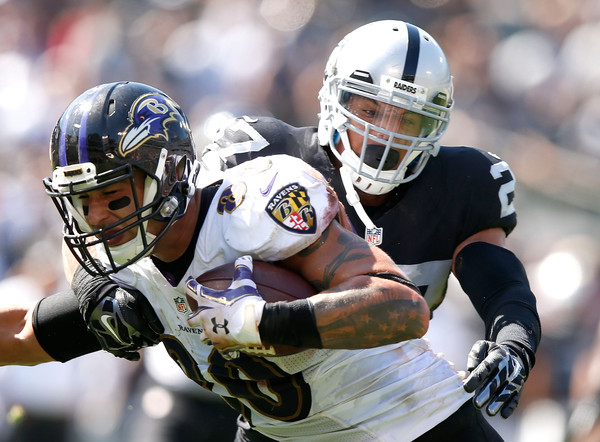 Joe Flacco was having a splendid day in the pocket in Week 2 against the Oakland Raiders. He was not sacked at all, and he even completed 32 of 45 passes for 384 yards and two touchdowns. But a late interception in the dying seconds of the game sealed the Ravens’ 37-33 loss.

Despite an excellent aerial attack against the Raiders, Flacco will need Baltimore’s rushing offense to kick into gear to help draw pressure away from him. He struggled to complete passes in two games against the Bengals last season with a 54 percent completion percentage and three interceptions.

Running back Justin Forsett had a much better performance than his Week 1 dud against the Broncos. He rushed for 68 yards on 15 carries (an average of 4.5 yards per attempt) against the Raiders. His backup in Lorenzo Taliaferro had a good day as well, rushing for 34 yards with a score on seven carries.

On the other side of the ball, Baltimore has a capable secondary that could limit Cincinnati’s Dalton from completing passes to his favorite receivers. Cornerback Jimmy Smith and strong safety Will Hill both have interceptions this season. Smith had a pick-six against Peyton Manning and the Broncos in Week 1.

The Ravens’ pass rush is also a force to be reckoned with, led by linebacker C.J. Mosley and his two sacks this season. Last year’s sack leader Elvis Dumervil (17) has yet to record one this year, but a meeting with a division rival may be what he needs to boost his game.

Baltimore has won four of its last five home games against the Bengals, going 2-2-1 ATS.

The Ravens treat their fans to a show as they win their first game of the season. Create a betting account now and cash in on all the big divisional games to come.