Jarome Iginla can still play. The 18-year vet showed glimpses of his former self, when he struck twice on Thursday to help the Colorado Avalanche beat Ottawa and end a four-game skid. More than that, the Avs also stayed in position to get at least a playoff wild card berth with the victory.

With a road game in Motor City later tonight, will Iginla and the Avs record their first back-to-back wins since the All-Star break? Or will the surging Red Wings extend their win streak to four games?

Read on for a breakdown of this matchup. You can also check out our preview of Preds vs. Lightning.

Semyon Varlamov is still searching for the stellar form he had in the lead up to the All-Star break, but at least the Avs got themselves back in the win column with a 4-3 win over Ottawa on Thursday.

Varlamov, who had a 0.99 GAA and .972 SV% in four starts prior to the midseason break, has allowed 10 goals in his past three starts. That includes all of the Sens’ goals in the previous game, in which Ottawa also won the shots battle, 29-27.

The Avs’ defensive struggles, however, aren’t all Varlamov’s fault, as Colorado’s blue line has also been having trouble containing opposing attackers. The Avs are allowing 31.8 shots against per game, which is third-most in the league.

In any case, the Avs will look on Jarome Iginla to make things happen on offense later tonight. Iginla has been great of late, as he’s picked up five points over the last four games, even scoring twice against the Senators. After going scoreless in four games, Nathan MacKinnon finally found the net against Ottawa for his first goal since the midseason break. MacKinnon is second on the team with 19 goals, while Matt Duchene paces the Avs with 24.

Colorado is looking to build on its awesome showing on the power play after scoring three power play goals against Ottawa.

The Avs, who are 13th overall with 19.0 percent success rate on the man advantage, are 4-1 in their last five road games. 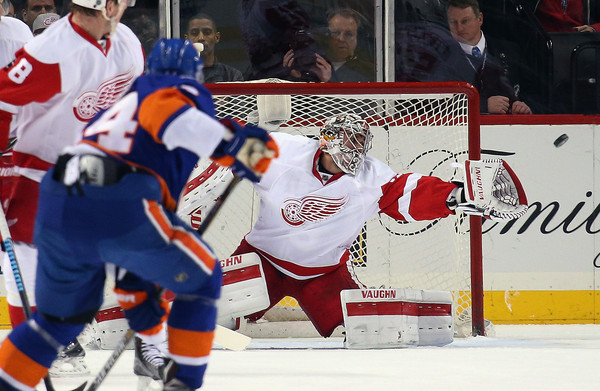 Aided by a Petr Mrazek’s tremendous goaltending, the Red Wings are putting a scare on the Panthers’ reign at the top of the Atlantic Division, as they’ve racked up three straight wins heading into tonight’s matchup with Colorado.

Mrazek was once again instrumental on Wednesday, when he stopped 22 of 23 shots to help Detroit beat Ottawa at home, 3-1. With Mrazek playing very well, there should be no doubt that the 23-year-old netminder will get the start versus Colorado, against whom the Red Wings are 5-2 in the last seven meetings.

Mrazek was also in front of the net in the Red Wings two previous wins over Florida and the Islanders, who managed to combine for a solitary goal against Detroit’s defense that currently ranks ninth in the NHL with 2.4 goals against average. On the season, Mrazek has impressive numbers of a 21-10-4 record, a 1.94 GAA, and a .934 SV%.

As for their offense, the Red Wings have been getting a boost from Pavel Datsyuk, who extended his point streak to three games with an assist in the win over Ottawa. The Magic Man now has five points (two goals, three assists) thus far this month.

Detroit’s special teams are also poised to shine on the man advantage later tonight, considering Colorado’s middle-of-the-road penalty kill that has allowed four power play goals over the Avs’ past four games. On the flipside, Detroit has gone 4-for-16 on the power play in the last four contests.