NFL Week 3 starts up with a homecoming for Chiefs head coach Andy Reid in Philadelphia, while Week 4 of College Football features an ACC opener.

In a surprising move, the Cleveland Browns traded running back Trent Richardson to the Indianapolis Colts for a 2014 first round pick.

Paul George has stated his intention to sign a long-term extension to stay with the Indiana Pacers.

Jennings’ RBI single gave Tampa Bay a 4-3 victory over the Texas Rangers as the Rays took over the top spot in the AL wild-card race.

Andy Reid returns to the city where he thrived — and eventually nosedived — when he guides the Kansas City Chiefs into a Thursday night matchup with the host Philadelphia Eagles. Reid enjoyed a spectacular run during his 14-year tenure with the Eagles, bringing the team to five conference championship games and one Super Bowl appearance. Philadelphia burned out in Reid’s final two seasons, leading to his dismissal and the offseason hiring of Oregon coach Chip Kelly.

Reid has the Chiefs off to a surprising 2-0 start to match their win total from last season. Kelly’s fast-break offense is the talk of the league after Philadelphia totaled 63 points, splitting its first two games.

The total has gone UNDER in 5 of Kansas City’s last 6 games. However, the Eagles have seen the total go OVER in their last 5 games. 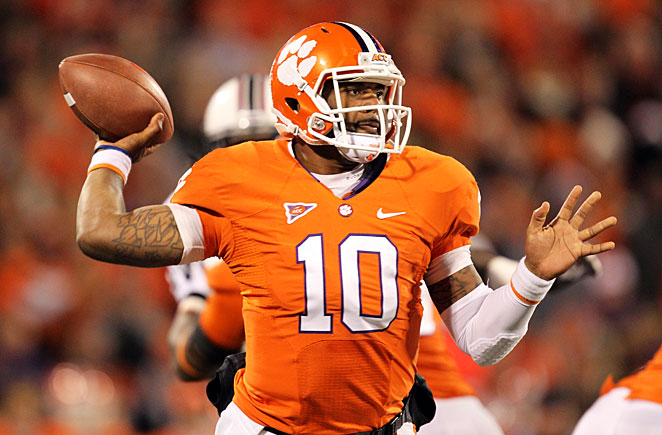 North Carolina State looks to slow down Heisman Trophy candidate Tajh Boyd on Thursday when the Wolfpack host fourth-ranked Clemson in the Atlantic Coast Conference opener for both teams. Boyd accounted for an ACC-record eight touchdowns in last season’s 62-48 victory over the Wolfpack. The senior quarterback also threw for three scores and ran for two more in Clemson’s season-opening 38-35 win over Georgia. The Tigers have won eight of the last nine meetings, but were upset during their last visit to Raleigh in 2011.

For the most comprehensive list of NFL and NCAAF game odds and betting lines, visit Top Bet’s Sportsbook.