[sc:NHL250 ]Two Eastern Conference teams looking to continue their push for the playoffs square off tonight, as the Detroit Red Wings pay the Tampa Bay Lightning a visit at the Amalie Arena. This will be the fourth and final regular-season clash between the two and the Red Wings, who have won the first two meetings, will look to win the series overall. But can they succeed in doing so in front of a hostile crowd?

Read on below for a comprehensive breakdown of this intriguing showdown. And while you’re at it, you might as well check out our preview of the Los Angeles Kings vs. Minnesota Wild.

Detroit enters this matchup as winners of back-to-back games opposite Columbus and Florida. In the latter game, the pair of Pavel Datsyuk and Dylan Larkin led the way with three goals combined to help their team eventually notch the 5-3 triumph over the Panthers on Saturday. That win was pretty huge, as it allowed the Red Wings to move ahead of Philadelphia for the Eastern Conference’s final wild-card spot.

[sc:NHL250 ]Now, the Red Wings will look to strengthen their hold and also win their third-straight game tonight versus a familiar foe in the form of the Tampa Bay Lightning. And needless to say, expect Detroit to continue putting its trust on Henrik Zetterberg and Larkin to lead the attack.

Zetterberg, the team’s top point-getter (44), has been limited to just a single goal over his past four matches. But he should probably be able to come alive this time around as he’s played relatively well across 36 road games this season, tallying a total of 19 points (seven goals, 12 assists).

Larkin, meanwhile, will try to continue adding more highlights into his spectacular rookie campaign. The 19-year-old center leads the team in goals (21) and is second in points (43). He’s also been at his best when playing away from home with 22 points (10 goals, 12 assists) under his belt throughout 34 road games thus far. 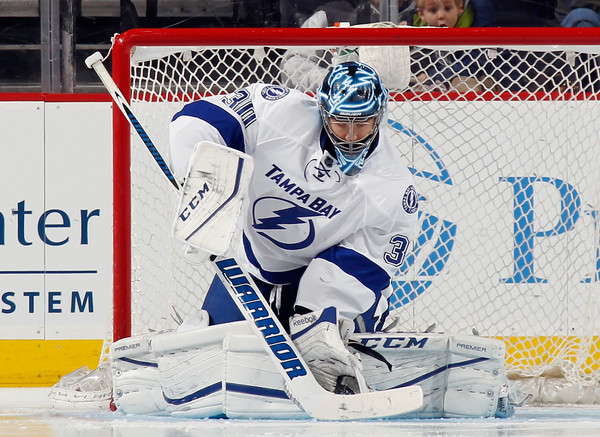 After losing two-consecutive games, the Tampa Bay Lightning got back on track against the Coyotes last Saturday in resounding fashion, 2-0. Starring in that game was none other than Ben Bishop, who negated all 31 shots for his fifth shutout of the season. He’ll hope to replicate this performance when the Detroit Red Wings come to town.

Bishop should be able to do so, as he’s fared considerably well against the Red Wings across 13 career games. In that stretch, he boasts an 8-4-0 record along with a 1.69 GAA and .936 SV%. Bishop was also solid in the last meeting with Detroit last month by negating 24-of-25 shots to help the Lightning grab the 3-1 victory.

On offense, meanwhile, things are looking quite good for the Lightning, who are trying to take another step further in overtaking Florida atop the Atlantic Division. The trio of Steven Stamkos, Nikita Kucherov and Ondrej Palat are bound to have a solid outing.

Stamkos, the Lightning’s leader in points (58) and goals (33) this season, has garnered a total of 14 points and 17 assists through 35 home games. Kucherov and Palat, on the other hand, have combined for nine goals and seven assists in the previous nine contests.

Create a betting account now and cash in on all the exciting NHL regular-season action.