The Houston Rockets are turning out to be quite a challenge for the league-best Golden State Warriors. But the Rockets are staring at a 2-0 hole after two razor close losses in the first two games of the Western Conference Final. Can Houston chip into Golden State’s lead at Toyota Center? Read on for everything you need to know heading into Game 3 of the Warriors vs. Rockets.

Get the most of the remaining NBA Playoffs action. Check out our complete preview for the Cavaliers vs. Hawks Game 2.

Can anyone stop the reigning MVP?

[sc:NBA240banner ]Curry’s three-point shooting remains dangerous even on the road. He’s making 5.4 threes per game on 47 percent shooting away from home this postseason. But the reigning MVP also has his flaws. He committed six turnovers in the razor-thin 99-98 Game 2 victory. Curry is averaging 3.9 turnovers per game, third-most among all players in the playoffs.

The Dubs would be even more dangerous if not for Klay Thompson’s slump in the conference finals. Thompson has shot just 2-of-14 from downtown in the first two games against Houston. But he has been hot from beyond the arc on the road this postseason, making 3.8 threes on 53 percent shooting.

Having a good inside defender in Bogut will be crucial in limiting Houston’s preferred style of driving toward the basket. The Dubs center averaged three blocks and 12 rebounds in two regular season games at Houston.

The Dubs have won four of their five playoff games on the road, going 3-2 against the spread. 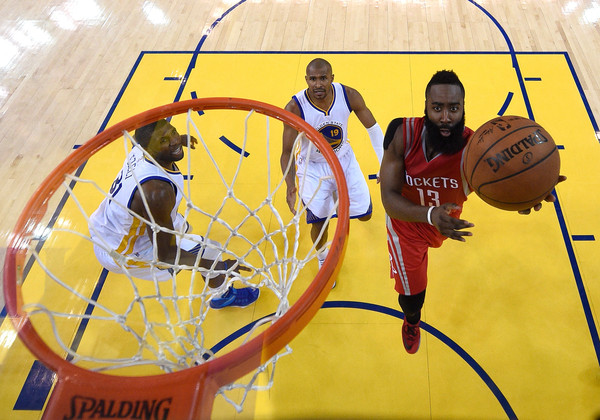 Fear the Beard. James Harden is doing it all for the Houston Rockets. He finished with 38 points, 10 rebounds, and nine assists in Houston’s Game 2 loss. Harden is now averaging 33 points, 10.5 rebounds, nine assists and 3.5 steals per game in the Western Conference Finals.

Harden may turn on his scoring even more in Game 3 with the amount of free throws he’s attempted at home this postseason. He’s averaging 11.9 free throw attempts per home game in the playoffs. The Rockets are 6-1 SU/ATS in those games.

But for Houston to avoid a 3-0 series deficit, the rest of the Rockets will need to step up their games. Harden should get most of his support from Dwight Howard who has been a beast all postseason long with 10 double doubles. Howard powered through an injured knee to record 19 points and 17 rebounds in Game 2. Howard is averaging 19.9 points and 13.1 rebounds in seven home games thus far.

Trevor Ariza has also stepped up his game at Toyota Center this postseason. He averaged 19 points in four home games in the conference semifinal. Ariza should be a threat on both sides of the court, leading the Rockets with 1.7 steals this postseason. He could take advantage of some ill-advised passes from Golden State, which commits 15.2 turnovers per game in the playoffs.

Harden has another monster game. The rest of the Rockets follow suit for a Game 3 victory. Create a betting account now and brace yourself for more breathtaking NBA Playoffs action.