The 2013-2014 NBA season is one of the biggest in history in terms of showcasing multiple storylines. One of those speculates as to whether or not the Showtime moniker held so long by the LA Lakers is up for grabs.

With Kobe Bryant currently out of the line-up, plagued by injuries that have grounded his high flying antics of youth, there seems to be no one left to carry the Showtime torch within the Staple Center. It once seemed that the Lakers’ flare for being the most entertaining team in the league would burn eternal. The incarnation started with Kareem and Magic and carried through to Shaq and Kobe, until it was just Kobe.

Even the so called Showtime “dry-spell” years were peppered by the antics of Nick Van Exel and Eddie Jones backed by the celebrity lined floor seats. But now the crickets are chirping in the Lakers’ corner of the Staple Center while other teams circle like vultures, aiming to claim the Showtime title along with the Larry O’Brien trophy.

It’s still all about the championship, but the athleticism, enthusiasm and love for the game possessed by players on certain teams in the league have opened up the competition for most entertaining of the 2013/2014 NBA season, and beyond.

Dwight Howard is bringing a wide smile, wider shoulders and his talents to Space City.

He will join a young and talented core consisting of Jeremy Lin, Omer Asik and James Harden. The moment he told fans that he would be signing with Rockets via Instagram, the Rockets caught the NBA world’s attention. How’s that for Showtime?

The Houston Rockets are for real, but the questions is, can Howard lead a group of youngsters up into the elite echelon of the Western Conference? Only time will tell.

Speaking of great comebacks, another elite player who the world wants to see back on the court is Kobe.

Kobe Bryant vowed to return better than ever. Despite suffering an injury so severe that many people thought he would call it a career, the Black Mamba is poised to return to warrior form.

He has a tall task at hand, bringing the fight back to a Lakers team now mired in low expectations. But after watching his teammates torch the Clippers in their season-opener, we bet he can’t wait to take on the challenge.

With Kobe on the cusp of returning, there’s no containing the excitement in LA. He’s already stamped his legacy, but will he be able to keep Showtime in yellow and purple tones long enough for the next Lakers’ generation to continue and do the same?

The battle for Showtime is at it’s fiercest in LA.

As previously mentioned, the Los Angeles Clippers got beat by their big brothers again when everyone expected them to pump the Lakers. Clips Nation might see this as a setback in what could possibly be a breakthrough season for Chris Paul and co — and rightfully so.  [sc:NBA240banner ]

With former rookie of the year and above-the-rim beast, Blake Griffin, at their side, Doc Rivers’ arrival and Paul’s extension spell change for the city of Los Angeles, the majority of which is Laker town. Finally, the LA team that’s been lounging low for so long has the chance to prove to the basketball world that they aren’t boring losers anymore.

Rivers came up with the idea of covering the Lakers banners for every Clippers home game. It was the right move by Doc, as it’s time for the team to rise above and create their own history in LA.

The Thunder failed to reach the final two years in a row after losing to Memphis in the second round of the playoffs last year. The series wasn’t the only thing they lost during the postseason, as Russell Westbrook went down with a knee injury in the previous series against the Rockets, sealing their fate against the Grizzlies.

They’re still waiting on Jeremy Lamb to step up as the sixth man since Harden left, but make no mistake, this team has plenty of oomph to get it done and claim that Showtime title. Kevin Durant will shoulder the load, along with defensive star Serge Ibaka, with Westbrook out for the start of the season after undergoing a second knee surgery.

With all hands on deck, this is one of the most dangerous teams in the league – and danger keeps the league entertaining.

That’s what LeBron James answered to questions about the obvious task at hand for the Heat this season.

Of course the star-power packed Miami Heat, with James, Dwyane Wade and Chris Bosh still together for another year of title defense, are still the favorites to win, although unlike the last three years, this team isn’t so heavily favored anymore, with other teams like Chicago, Indiana, New York and Brooklyn gunning for their heads on the East side.

The chase is on, and the rest of the NBA will need to get through the one with the gold and the recognition if they want to be sole possessors of the Showtime crown.

However, the Big Three are not alone in their quest to stay in power. They have their Little Twelve (everyone not named James, Wade and Bosh) to rely on. The Heat hope that Greg Oden can come back from his knee problems and Michael Beasley can bounce back from his character issues.

When everything is running according to plan in Miami, look out world, the “The Greatest Show on the Hardwood” won’t stop until they win that trophy for the third time in a row. 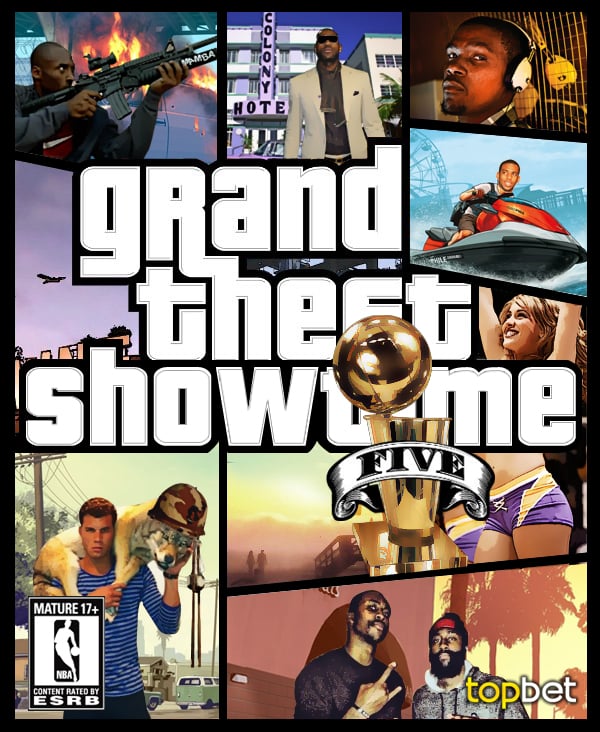 Derrick Rose is back, folks.

Finally, after more than a year of sitting out, #TheReturn has come.

It will be interesting to see how he rises to the physical challenge of leading the Bulls through the season and the emotional challenge of returning to MVP form.

His return will surely put the Bulls up there in the rankings, and there’s no doubt they want to challenge the top dog Heat for their gold. Will this year be his time to make the great cinematic worthy comeback?

Update: Derrick Rose suffered a hamstring injury and #TheReturn has been put on hold.

The Brooklyn Nets have everything needed to up the excitement factor: a brand-new super team, two future Hall-of-Famers giving one last push for the title, and a new head coach to lead the way.

The Golden State Warriors are the new sports media darlings of the NBA.

The Warriors are the young lions looking to soar and roar in the league. They’ll use their valuable playoff experience from last year to guide them to success. They’re no longer dark horse contenders in the West, which means they aren’t going to sneak by anyone anymore.

Last year, the NBA witnessed the making of a superstar in Stephen Curry, and he will be expected to lead the Warriors to greater heights. Although the whole world has now acknowledged this blazing team, they still have to prove they belong in the Showtime conversation.

Check out Top Bet Sportsbook for lines and odds for all these teams going into the 2013-2014 NBA season guns blazing, in search of the Showtime Title. Share this Grand Theft Showtime mash up with your friends and let us know who your pick for most exciting NBA team is on Twitter, Facebook and Google Plus.