The Indianapolis Colts pushed their proverbial chips on the table this offseason. They snapped up veterans Frank Gore and Andre Johnson with the hope of finally getting over the hump and into the Super Bowl.

Those moves – and an ever-improving Andrew Luck – have made the Colts +275 favorites to win the AFC. But their new souped-up offense will be put to the test immediately in Week 1 as they face the Buffalo Bills and their immense defense on the road.

Read on for more on this intriguing offense vs. defense matchup. Meanwhile, check out more all-AFC matchups with our previews of the Steelers vs. Patriots and Chiefs vs. Texans.

The Colts offense wasn’t bad by any means last season. With superstar quarterback Andrew Luck pulling the strings, they put up 406 yards per game (third in the NFL) and 28.6 points per game (sixth) to power their 11-5 (10-5-1 against the spread) record. However, they were only 17th in DVOA because of an inept running game that ranked a lowly 27th.

[sc:NFL240banner ]This season, though, Luck will have some more weapons to utilize in the form of consistent 1,000-yard rusher Frank Gore and 1,000-yard receiver Andre Johnson. Johnson will join an absolutely stacked receiving corps that also features TY Hilton, Donte Moncrief, first-round pick Phillip Dorsett and the tight end platoon of Dwayne Allen and Coby Fleener, who combined for 16 touchdowns last season.

Even against a formidable Bills defense, this Colts offense has all the talent necessary to put up points on the road.

The Colts defense wasn’t dominant last season – it was 11th in yards allowed per game (342.7) and 19th in points allowed (23.1) – and it didn’t make any major additions in the offseason. But it should be able to hold its own against a problematic Bills offense.

The Colts ranked ninth in adjusted sack rate last season, which means they can get after the quarterback. They should be able to put pressure on the Bills’ inexperienced starter, Tyrod Taylor, as they face a Buffalo offensive line that has some serious question marks.

Cornerback Greg Toler is also a question mark to play after suffering a neck injury during preseason, but Vontae Davis is a top corner that can silence the Bills’ star receiver Sammy Watkins.

Create a betting account now and make some noise wagering on the terrific NFL action this season. 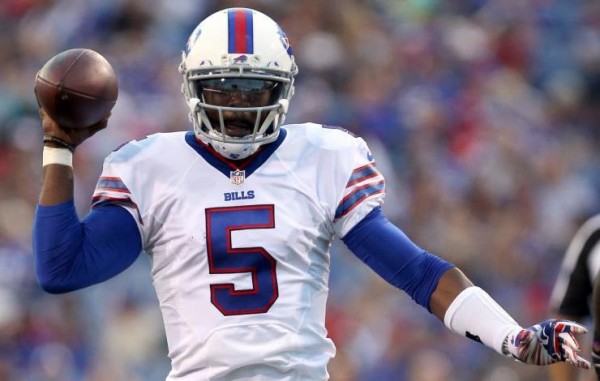 Taylor could be a threat to make some plays with his legs against Indy, much like the team’s new star running back LeSean McCoy. McCoy had 1,319 yards and five TDs for the Eagles last season, and should get an even heavier workload after the team cut veteran back Fred Jackson.

Taylor isn’t expected to be an upgrade for a Buffalo offense that averaged just 21.4 points per game last season (18th in the NFL) and finished 26th in offensive DVOA. But the Bills and their otherworldly defense might have gotten one with a defensive genius in Ryan now at the helm.

The Bills defense, which was a major reason for their 9-7 (straight up and against the spread) record last season, allowed just 18.1 points per game (fourth in the league) and merely 16 points at home. The unit was so good that it held Aaron Rodgers and the top-ranked Packers offense to 13 points in a Week 15 home win.

Buffalo finished first overall in pass defense per DVOA (and No. 2 overall) thanks to their combination of a ferocious pass rush, which had a league-leading 54 sacks last season, and a terrific secondary. That combination will be perfect in neutralizing Luck and the Colts passing game.

Buffalo went 5-3 (4-4 against the spread) at home last season. But due to its terrific defense and mediocre offense, the under went 7-1 in those games.

The Bills defense does its part, but Taylor and the offense can’t keep up with the Colts, who cover -2.5 on the road.