Football’s been gone for so long; thank heavens it gives us one hell of a matchup for its first Sunday back into action. The Kansas City Chiefs roll into NRG Stadium for a Week 1 matchup against the Houston Texans. The Chiefs remain as one of the top teams in a loaded AFC West, while the Texans welcome a new starting quarterback in Brian Hoyer. Can the Chiefs take a crucial road win to kick off their season with a bang?

There’s plenty more football to satisfy your cravings. Check out the complete previews for the Packers vs. Bears and Browns vs. Jets.

No Kansas City wide receiver managed to score a touchdown last season. The Chiefs made sure to remedy that situation by signing former Philadelphia receiver Jeremy Maclin. He had an incredible 2014 season, catching 85 passes for 1,318 yards and 10 touchdowns with the Eagles. Maclin is due for a big regular season debut against the Texans this year. He caught six passes for 158 yards and two touchdowns in his last game at NRG Stadium a year ago.

[sc:NFL240banner ]It didn’t take Maclin long to build some rapport with Kansas City quarterback Alex Smith. The two connected seven times for 65 yards and a touchdown in less than a half in a 34-10 victory over Tennessee in Week 3 of the preseason. Smith was also solid in perhaps his final appearance before the regular season, going 15 for 20 for 146 yards and two touchdowns.

Tight end Travis Kelce also serves as a viable target for Smith this 2015 after making 67 catches for 862 yards and two scores in his first full season last year. Running back Jamaal Charles is also a solid receiver  (for a running back) with five scores last season; though his role in the passing game may diminish with Maclin’s arrival. That leaves Charles plenty of time to terrorize his opponents with his elite running game. He ran for 1,033 yards and nine touchdowns on 206 carries last season.

The Chiefs also have a solid defense to make Houston’s new starting quarterback miserable. Linebacker Justin Houston is back after leading the NFL in sacks (22) last season. The Chiefs ranked second in the league in scoring defense (17.6 points per game) last season.

Kansas City is 6-2 ATS in its last eight games as underdogs.

Create a betting account now and get in on the exciting football season to come. 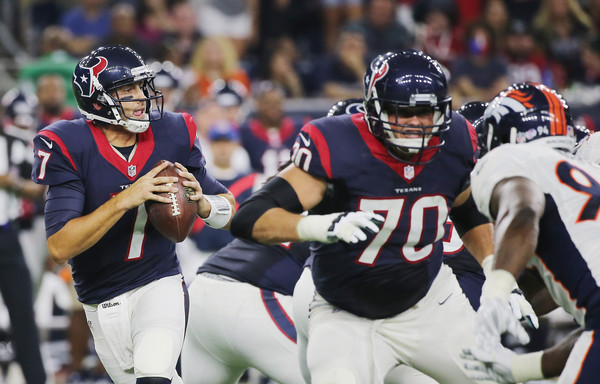 Brian Hoyer arrived and sealed the Houston Texans’ starting quarterback position with solid play in the preseason. He led scoring drives in two of his three series in his first game as the Texans’ designated starter in a 27-13 victory over New Orleans in Week 3 of the preseason. Hoyer went 7 of 11 for 82 yards passing.

Hoyer will have a couple of strong weapons in the receiving corps in DeAndre Hopkins and rookie Jaelen Strong. Hopkins caught the only pass coming his way for 29 yards in his last outing in Week 3 of the preseason, while Strong had a big showing with 40 yards and a touchdown.

Houston will limp into the regular season, though. The team is still missing stellar running back Arian Foster, who is currently recovering from offseason groin surgery. He was solid last year despite missing three games, rushing for 1,246 yards and eight scores on 260 carries. His backup, Alfred Blue, couldn’t come close to that type of production, running for 528 yards and two touchdowns on 169 carries (3.1 yards per carry).

The Texans could rely on a strong defense led by defensive end J.J. Watt to keep them in a tight game. Watt finished the 2014 regular season ranked second with the most sacks (20.5) and also led the league with 53 quarterback hurries. He also managed to return an interception 80 yards for a touchdown and even four forced fumbles.

Kansas City was one of the most sacked teams last season, allowing 49 of them (seventh in the league). If Watt is allowed to run roughshod against the Chiefs’ offensive line, then Houston should be able to start their season with a bang.

The Texans have won their last three home games, going 2-1 against the spread.

Houston feels the sting of missing Foster as the Chiefs (+1.5) take this clash.