The injury bug bit the Green Bay Packers hard in preseason, as top receiver Jordy Nelson was lost for the season. But the Packers still have reigning NFL MVP Aaron Rodgers under center to lead them into a very favorable Week 1 matchup against their NFC North rivals, the Chicago Bears.

Rodgers and the Packers have owned Da Bears in recent years, even in Chicago. Can new Bears head coach John Fox put a halt to their sorry record at Soldier Field? Read on for our preview of this very early division clash.

Get caught up with all the top Week 1 matchups by checking out our previews of the Steelers vs. Patriots and Colts vs. Bills.

The preseason has not been kind to the Green Bay Packers’ receiving corps. The defending NFC North champions, who went 12-4 (9-6-1 against the spread) last season, lost No. 1 receiver Jordy Nelson for the year to a torn ACL in Week 2 against the Steelers.

[sc:NFL240banner ]Then, Randall Cobb suffered a shoulder sprain the following week against the Eagles. But despite the injury, Cobb could yet start in Week 1 against the Bears.

Quarterback Aaron Rodgers will miss Nelson’s ability to stretch the field. However, the reigning NFL MVP has enough weapons on offense, second-year receiver Davante Adams and Pro Bowl running back Eddie Lacy to name two. The Packers, who led the league in scoring last season (30.4 points per game), can put points on anybody, and even more so if Cobb is on the field.

Also, who could forget the last time Rodgers faced the Bears (in Lambeau), when he threw for six touchdowns in the first half alone to crush Chicago, 55-14, last season? Certainly not the Bears.

The Packers, who return just about everyone from last year’s team – Nelson and a couple of veteran cornerbacks aside – limited the Bears to just 31 total points in their two meetings last season. The Bears’ inability to score against the Packers’ D has been a common occurrence in this rivalry, which has been very one-sided in recent years.

The Packers are 9-1 (8-2 against the spread) against the Bears in their last 10 meetings. The Bears have averaged just 16 points per game in those meetings, and have only scored over 20 points once in five games at home. 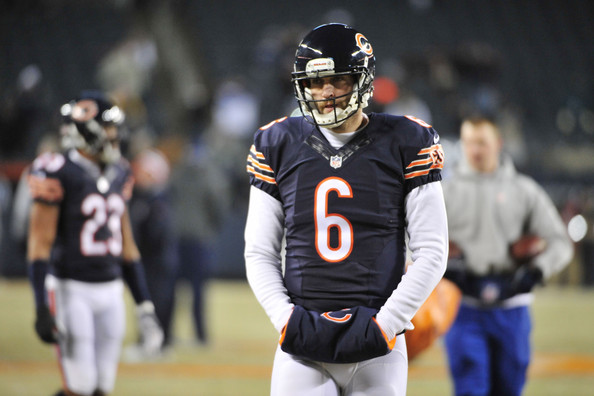 The Chicago Bears just haven’t been able to beat the Green Bay Packers (with a healthy Aaron Rodgers) over the last four years. Lovie Smith and Marc Trestman tried and failed; this year, John Fox will have a crack at ending Chicago’s accursed slump against the Pack. The Bears went a disappointing 5-11 (7-9 against the spread) last year under Trestman as they lost to Green Bay by an average of 31 points in two games.

Fox and new offensive coordinator Adam Gase have inherited most of the key pieces of a Bears offense that finished 14th in offensive DVOA last season. Mercurial quarterback Jay Cutler will be without rookie receiver Kevin White, but Pro Bowlers Matt Forte, wideout Alshon Jeffery and Martellus Bennett are all very dangerous weapons at the skill positions.

However, defensive coordinator Vic Fangio will have his hands full in fixing a defense which was way down in 28th in defensive DVOA last season. The pass defense, which was 29th in the league, has been a particularly bad matchup against the Packers’ prolific passing attack.

The Bears will need a better pass rush in order to beat Green Bay. They could have just that with the addition of Pernell McPhee (7.5 sacks last season with Baltimore) and improvement from second-year lineman Ego Ferguson. Jared Allen could also be primed for a bounce-back season after registering a career-low 5.5 sacks in 2014.

Soldier Field was far from a fortress for Chicago last season, though. The Bears went just 2-7 (straight up and against the spread) at home last season, and averaged a pitiful 16.7 points per game.

It’s business as usual for Rodgers and the Packers, who blow out the Bears by at least two scores. Create a betting account and cash in on the NFL’s top teams all season long.