The Ohio State Buckeyes preserved their unbeaten record this season with an impressive 25-point victory over Illinois on Saturday. They will look to keep the momentum going this coming Saturday when they take on the Michigan State Spartans in a blockbuster matchup at Ohio Stadium.

Who will emerge victorious in this critical Big Ten clash? Read on below for a preview of this college football showdown and while you’re at it, you can check out our previews of Baylor vs. Oklahoma State and TCU vs. Oklahoma.

Michigan State returned to winning ways Saturday with an emphatic 24-7 victory over Maryland at Spartan Stadium. It was a huge bounce-back win for the Spartans who suffered a gut-wrenching 39-38 defeat to Nebraska the previous weekend. With the victory, the Ducks improved their overall record this season to 9-1 and in the process keep their playoff hopes alive.

[sc:NCAA240banner ]They can further boost their title credentials this coming Saturday when they face the reigning national champions Ohio State. For the Spartans to record a major shock, they will need to get another huge game from their prolific rush offense. The Spartans wreaked havoc on the ground on Saturday, rushing for a total of 141 yards. Gerald Holmes was spectacular for Michigan State in this contest, rushing for 83 yards and a touchdown on 18 carries.

A main source of concern, though, for head coach Mark Dantonio heading into this make-or-break showdown with Ohio State is the condition of star Connor Cook. The senior quarterback suffered a shoulder injury in the game against Maryland and didn’t play the entire second half. He was only 6 of 20 for 77 yards with an interception in the first half against the Terrapins.

Cook has played a huge role in Michigan State’s success this season, throwing 21 touchdowns and just four interceptions. He was playing some excellent football prior to his injury, throwing eight touchdown passes in the Spartans’ past two games. Michigan State needs Cook’s ability and experience to dissect an Ohio State defense that’s surrendering just 298.4 total yards per game this season.

The Spartans are 2-8 SU and 3-7 ATS in their last 10 games against the Buckeyes. 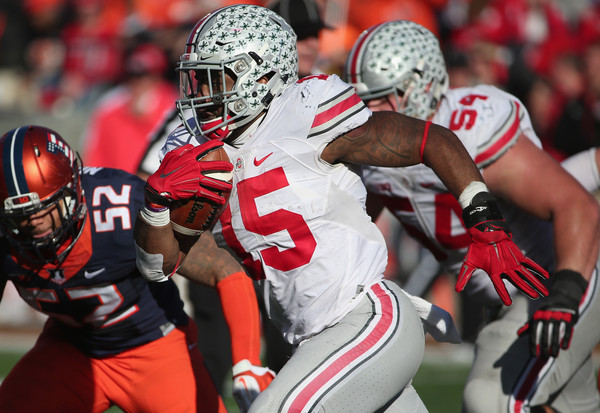 Ohio State will head to its Big Ten showdown with Michigan State with momentum on its side after destroying Illinois, 28-3, on Saturday. It was another impressive victory by the defending champions who improved their overall season-record to 10-0. The Spartans have won their first 10 games by an average of 22.6 points.

Leading the way for the Buckeyes in this game was Ezekiel Elliott. He rushed for 181 yards and two touchdowns on 27 carries. It was a historic night for Elliott who moved into third place on Ohio State’s career rushing list with 3,565 yards. He trails only Archie Griffin (5,589) and Eddie George (3,678) in the Buckeyes’ all-time rushing list.

Apart from the dazzling display of Elliott, credit must also be given to the Buckeyes’ defense for their victory on Saturday. Ohio State buckled down to work in the second half, holding Illinois scoreless in the final two quarters. The Buckeyes were relentless particularly with their rush defense, holding the Illini to just 20 yards rushing. They will need more of the same defensive intensity for them to preserve their unbeaten record against Michigan State.

The Buckeyes are allowing just 13.8 points per game this season, second in the FBS. They will have their work cut out for them, however, against a Michigan State offense that is averaging 32.9 points per contest this campaign.

Ohio State is 4-2 SU and 2-3-1 ATS in its last six home games against Michigan State.