One of college football’s greatest rivalries will take center stage this coming Saturday as the Michigan State Spartans square off with the Michigan Wolverines. The Spartans are coming off a comprehensive 39-point win over Indiana on Saturday and will look to record their sixth consecutive victory against a Michigan side that is struggling for form as of late.

Can the Spartans continue their winning ways and solidify their championship hopes? Or will the Wolverines spring a surprise and score a stunning upset? Read on for a preview of this Big Ten matchup and while you’re at it, you can check out our preview of the West Virginia vs. Oklahoma State game.

Betting on the Michigan Wolverines

The Michigan Wolverines will head into their much-anticipated clash with rivals Michigan State with renewed confidence after beating Penn State 18-13 last Saturday to snap its three-game losing skid.

[sc:NCAA240banner ]Matt Wile converted three second-half field goals to help Michigan overcome a six-point halftime deficit. It was their defense, however, that was the real star as they put the clamps on Penn State shutting them out completely in the second half.

In fact, one of the few highlights of Michigan’s disappointing season so far is their impressive defense. They are ninth in the nation in terms of total defense with opponents averaging just 301.0 yards against them this season.

In their game against Penn State last Saturday, they limited the Nittany Lions to just 214 total yards. They will need every bit of that defensive intensity this coming Saturday when they face their high-scoring rivals Michigan State.

Quarterback Devin Gardner had a more productive outing against Penn State last Saturday though, returning from an ankle injury to complete 16 of 24 passes for 192 yards and a touchdown. Even though he walked after the game with a protective boot, coach Brady Hoke has confirmed that he will start the game against Michigan State.

Gardner will be looking for redemption against their bitter rivals after the humiliation he suffered against them last year. He threw zero touchdowns and one interception in a 29-6 defeat where he recorded a horrific -46 rushing yards.

The Wolverines are 3-4 ATS this season.

Create a betting account now and cash in on these NCAA college football games. 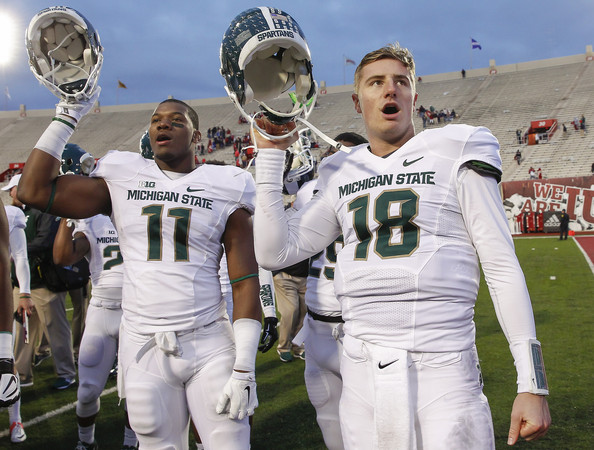 The Michigan State Spartans are peaking right into form ahead of their match with rivals Michigan as they trounced Indiana 56-17 on Saturday to record their fifth consecutive win.

Quarterback Connor Cook was the star of the show as he completed 24 of 32 passes for 332 yards and three touchdowns to help Michigan State improve its record to 6-1. It was a stellar offensive display from the Spartans attack as they recorded a whopping 662 yards in total offense, their highest output in the Mark Dantonio era.

With the win, the Spartans recorded their 12th straight Big Ten victory. They will fancy their chances of making it 13 in a row when they host the Wolverines this coming Saturday. When they faced Michigan last year, however, it wasn’t their offense that grabbed the headlines but their defense.

The Spartans’ defense was spectacular all throughout the ballgame as they limited the Wolverines to just 168 total yards. It was their defensive line that took all the plaudits as they recorded seven sacks and made the Wolverines finish with a minus-48 rushing yard mark, the worst output in Michigan history.

This year, the Spartans are just as impressive, recording 26 sacks in their first seven games so far this season (4th in the entire nation). Given their success against Gardner last year, expect the Spartan defense to swarm the opposing quarterback right from the early going. Not helping matters for Michigan is the news that Gardner is still nursing an ankle injury.

The Spartans are 6-0 ATS in their last six meetings with the Wolverines.

The Spartans crush the Wolverines.