There’s a wide-open race in the Big 12 conference with a bunch of teams jockeying for the no. 1 position, including the West Virginia Mountaineers and the Oklahoma State Cowboys. Both teams sport an identical 3-1 conference record, and will come into their showdown next Saturday with the intent of staying in the thick of the conference title hunt. Can the Mountaineers build on their upset win over the Baylor Bears in Week 8 and beat Oklahoma State? Or will the Cowboys regroup and return to the win column after a disappointing loss to the TCU Horned Frogs?

We also have a couple of SEC game previews, which you can look at. Click here for our preview of South Carolina vs. Auburn and here for Ole Miss vs. LSU.

[sc:NCAA240banner ]After two unsuccessful tries at beating a ranked team, the Mountaineers finally succeeded Saturday when Clint Trickett and Kevin White led their team to a huge 41-27 upset victory over no. 4 Baylor Bears, thus boosting the stock of West Virginia in the race for the Big 12 title. The Mountaineers are now 3-0 in their last three games, with the total hitting under in all of those contests.

Against the nation’s highest scoring team, West Virginia gave the Bears a dose of their own medicine, as Trickett went 23 of 35 for 322 yards and three scores. Trickett – third in the FBS with 367.2 passing yards per game – had a field day abusing the porous pass defense of the Bears, connecting with White for two touchdowns and another with Mario Alford.

White, the nation’s receiving leader with a ridiculous 148.0 yards per game output, is going to be a major headache for the Cowboys’ secondary just as he was for Baylor. Against the Bears, White made a mockery of the Bears’ defense, racking up 132 receiving yards on eight catches.

With the way Oklahoma has been defending against the pass, it’s very likely that the pair of Trickett and White is going to go off for another mammoth performance, as the Cowboys are second worst in the conference with 267.3 passing yards allowed per game.

The Mountaineers are 3-0 since losing to the Oklahoma Sooners on September 20. Dating back to last season, they are 5-1 in their last six games in conference play. 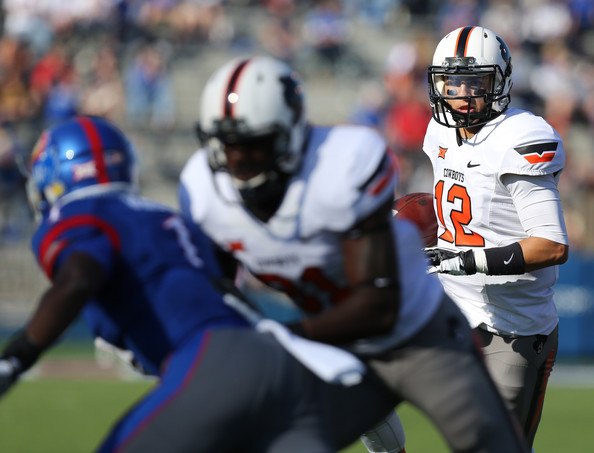 The Cowboys’ winning streak was stopped at five games after the TCU Horned Frogs brought the hammer down hard Saturday, defeating Oklahoma State convincingly, 42-9. Oklahoma State was utterly outclassed by the Horned Frogs, who exposed the Cowboys’ many weaknesses on both sides of the field.

The Cowboys failed to score a touchdown, while their defense was absolutely blown to bits by the Horned Frogs, who outgained Oklahoma State in total yards, 676-258. With another potent offense in West Virginia coming to Stillwater next week, Mike Gundy has some serious adjustments to make in order to avoid a repeat of the humiliation they suffered against TCU. Perhaps first on his list is how to stop the searing passing attack of the Mountaineers, who are 14th in the FBS in pass attempts (43.2) and seventh in completions (27.8).

Oklahoma State’s front seven has been an inept unit for most of the season – the team is ranked 120t with 41.0 passing attempts surrendered per game –, but the Cowboys may find it a little easier getting to Trickett, as West Virginia’s QB has been sacked 11 times already this season, third most in the conference. That should be music to the ears of defensive end Emmanuel Ogbah and linebacker Josh Furman, who are two of the Cowboys’ top performing players on defense with five sacks each thus far this season.

Daxx Garman and the Cowboys’ offense, meanwhile, are looking to bounce back from a measly nine-point output against TCU. Garman was held down to just 132 passing yards versus the Horned Frogs on 10 of 25 passing.

West Virginia’s passing attack is simply too much for the Cowboys, as the Mountaineers win, 44-20.