The South Carolina Gamecocks have struggled this season but they were not going to suffer a humiliating defeat against the Furman Paladins, whom they defeated Saturday. The Gamecocks, however, are virtually out of contention for a spot in the inaugural College Football Playoff, a scenario the Auburn Tigers are trying to avoid. Find out more about this SEC East-West clash below.

You can also check out our preview of Ole Miss vs. LSU here and West Virginia vs. Oklahoma State here.

Betting on the South Carolina Gamecocks

[sc:NCAA240banner ]An extra week of rest and a light opposition were enough for the Gamecocks to end their losing skid at two games as they soundly beat the Furman Paladins Saturday, 41-10. Things, however, are about to get rough again for Steve Spurrier and his boys when they trek to Jordan-Hare Stadium to face sixth-ranked Auburn.

Before their win over Furman, the Gamecocks suffered an upset 45-38 loss at the hands of the Kentucky Wildcats on October 4, mainly because of a tactical blunder by South Carolina. Despite having much success by rushing the ball, the Gamecocks opted to go for passing plays in crucial moments in the fourth quarter instead of pounding the rock on the backfield. Spurrier would later admit that it was a mistake, which means South Carolina would likely look more for Mike Davis, Brandon Wilds, and Pharoh Cooper to generate yards against Auburn.

Davis is the leading rusher for the Gamecocks, averaging 94.6 rushing yards per game. He will come into the matchup with Auburn carrying a three-game streak of at least 100 rushing yards, averaging 227.3 yards during that stretch. Together with Wilds (276 yards, 1 TD) and Pharoh (96 on 10.7 per carry), Davis will challenge the Tigers’ defense that allowed Mississippi State to run for 223 in their previous game.

The Gamecocks are 0-4 ATS in their last four games.

Betting on the at Auburn Tigers 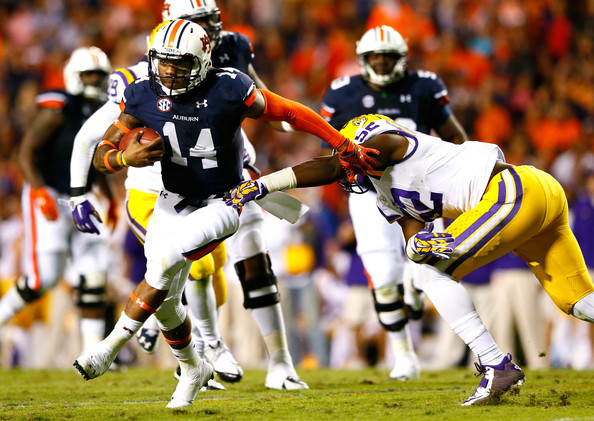 The Tigers slid down to no. 6 in the rankings after a 38-23 loss against now no. 1 Mississippi State Bulldogs, but still has chance to return to the College Football Playoff picture. Auburn, however, need to win against South Carolina as a loss to a non-top 25 team would be a gutshot to the Tigers’ hopes of making it to the final four.

The game against the Gamecocks on Saturday would set the table for a tough three-game stretch for Auburn, which will play consecutive games against top 10 programs in Ole Miss, Texas A&M, and Georgia following the South Carolina matchup. It’s worth noting, though, that the Aggies are likely to fall off the rankings after their embarrassing 59-0 loss to Alabama.

Like the Gamecocks, Auburn’s strength lies on its tremendous backfield that rushes the ball for 262.0 yards per game, 15th-best in the nation and fourth in the SEC. The Tigers have four players with at least 100 rushing yards thus far this season. Leading them all is senior running back Cameron Artis-Payne, who is burning the turf for 110.67.

Payne only had 70 yards on the ground against Mississippi State, but should improve against the Gamecocks’ defense that ranks second worst in the SEC with 176.83 rushing yards allowed per contest. Dual-threat QB Nick Marshall, meanwhile, rushed 100 yards against the Bulldogs, the third-straight game he hit triple figures on the ground. Marshall is averaging 82.0 rushing yards through six games this season.

Auburn remains in contention for a top four finish, as the Tigers beat South Carolina at home, 39-24.