The Ole Miss Rebels have been unstoppable. With eight wins in a row to start the season, including victories over ranked teams Alabama Crimson Tide and Texas A&M, the Rebels have gained a spot in the Top Four of the rankings and a solo seat atop the SEC West. Will the Rebels continue their reign of terror in the conference? Or are they in for a shock at Death Valley?

Looking for other college game previews? Click here for our preview of South Carolina vs. Auburn and here for Western Virginia vs. Oklahoma State.

Betting on the Ole Miss Rebels

[sc:NCAA240banner ]There’s no other program which hates it more when opponents score than the Rebels do. The Tennessee Volunteers found it to be true after taking an early 3-0 lead against Ole Miss, to which the  Rebels replied with 34 unanswered points on their way to a win Saturday. The victory improved Ole Miss’ undefeated record to 7-0 for a solo lead in the SEC West.

Defense has been the calling card of the Rebels’ success this season. Ole Miss is number one in the nation in scoring defense, letting opponents put up a paltry 10.6 PPG. Against Tennessee, the Rebels absolutely locked the Vols’ backfield down, allowing zero rushing yards to their SEC counterparts.

Having limited a team that has previously averaged 109.7 rushing yards per game to sheer futility, the Rebels have successfully sent a very strong message to LSU’s vaunted rushing game, which ranks 34th overall in the FBS with 209.1 yards per game. The secondary, meanwhile, can also come up with game-changing stops. Over the last three wins of Ole Miss, the Rebels’ defense has caught six interceptions. Overall, the Rebels have 15 interceptions, the most by any team in the conference. Senquez Golson tops the SEC with seven interceptions, while Cody Prewitt has two.

At the helm of Ole Miss’ offense is quarterback Bo Wallace, who directs a passing offense that averages 282.0 yards per game. Wallace is second in the SEC with 271.9 passing yards per game.

The Rebels are 10-0 ATS in their last 10 road meetings with LSU.

Betting on the at LSU Tigers 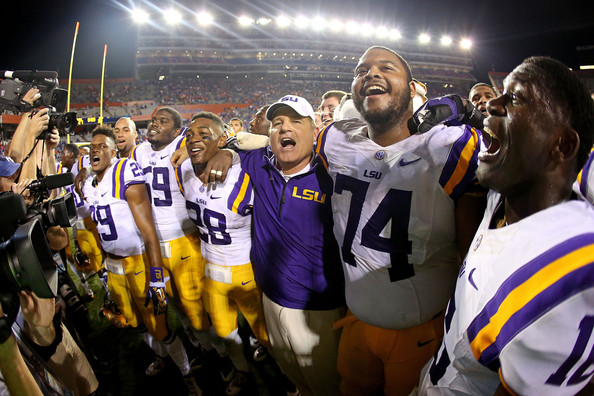 Following an ugly 41-7 loss to the Auburn Tigers on October 4, the Tigers scored a pick-me-up 30-27 victory over the Florida Gators before eviscerating the Kentucky Wildcats in Week 7, 41-3. Those pair of wins, however, did little to help LSU re-enter the Top 25 after falling out when the Tigers lost to Auburn. But if LSU can beat Ole Miss convincingly this coming Saturday, then Les Miles can expect his team to get back into it. To do that, LSU’s offense must solve the riddle that is the Rebels’ defense.

Despite the stringent rushing defense of Ole Miss, the Tigers shouldn’t be deterred from handing the ball to the trio of Leonard Fournette, Kenny Hilliard, and Terrence Magee in the backfield. Fournette, the much-ballyhooed recruit by Miles, leads the team with 68.0 rushing yards per game. Although that figure isn’t impressive when compared with those of other teams’ top running backs, it should be noted that LSU’s backfield is more than just about Fournette.

When Fournette wounded up with just 40 rushing yards against Kentucky after exploding for 140 and two scores against the Florida Gators in Week 7, Magee stepped up and ran for 127 yards and two TDs to gain a lion’s share of the Tigers’ 308 rushing yards in that game. Sure Ole Miss’ rushing defense is a brick wall, but a running committee consisted of talented LSU backs is capable of boring a hole through it.