Betting on the ALCS: Detroit Tigers vs. Boston Red Sox

Detroit is once again in the ALCS for the third time in a row. The Tigers almost did not make it but thanks to a great pitching crew led by Justin Verlander, they erased a two-game deficit to finish the A’s in the ALDS, three games to two.

Betting on the Detroit Tigers:

Justin Verlander is undeniably the face of the Tigers’ pitching staff but unlike in the previous seasons, his name is no longer the only one that stands out in the team. For one there’s Anibal Sanchez, who finished the regular season as the AL’s ERA king with a 2.57 mark. Sanchez takes the honor of starting Game 1 of the ALCS, a spot that could have been for Verlander, only if not to rest the former Cy Young winner after his masterful performance against Oakland in Game 5 of the ALDS. Verlander will get his moment in Game 2. He pitched only once against Boston this season, pitching five innings in the Tigers’ 7-5 win back in June.

Max Scherzer brings his stuff in Game 3. The 21-game winner Scherzer is 2-0 in the postseason already. He pounded the A’s in Game 1 of the ALDS and made a memorable relief appearance in Game 4, extricating the Tigers in a bases-loaded eight inning. Doug Fister rounds up Detroit’s first four starters. This postseason, the Tigers lead the AL in ERA with 2.86 and strikeouts fanning 57 batters – 34 of which came from the gloves of Verlander (21) and Scherzer (13).

In Game 4, manager Jim Leyland indulged himself into using Cy Young award candidate Max Scherzer as a reliever. His decision paid well as Scherzer gutted out a gritty eight-inning, bases-loaded clearing performance. Though it was a luxury to have a 21-game winner coming out of the pen, it also highlighted the questionable depth of the Tigers’ relievers. Starter Rick Porcello was delegated to the bullpen for the second year in a row, a move the Tigers could afford given their excellent rotation of Verlander and company. Drew Smyly and Al Albuquerque will have their usual setup roles to closers Joaquin Benoit and Jose Veras. Benoit has saved two games while Veras has curiously been not used in the postseason yet.

Miguel Cabrera’s two-run homer Thursday night in Game 5 of the ALDS could mark an end to the 2012 AL MVP woes. Cabrera only had two extra-base hits in over a month prior to his recent Game 5 homer. This is a far cry from what a healthy Cabrera could do, someone who contributed a lot to the Tigers’ regular season offense that ranked second in the AL in runs (796), OBP (.346), SLG (.434), and first in batting average (283). Johnny Peralta has been the hottest Tigers hitter so far in the postseason with 5 RBIs in 12 at-bats. Victor Martinez is even hotter going 9-of-20 in five games.

The Tigers are 5-1 OVER in their last six home games against Boston. However, they are coming into the ALCS going 8-2 UNDER in thier last 10 games.

Bet now on the Detroit Tigers

Betting on the Boston Red Sox:

The Red Sox are back to the ALCS for the first time since 2008. The last time they won it was in 2007, the same season they went onto the World Series and won it all.

Tasked to start Game 1 for the Red Sox is Jon Lester. Lester also started in Game 1 of the ALDS and came out a winner after Boston trampled the Rays, 12-2. The Red Sox are 2-0 against Detroit this season when Lester starts, including his nine-strikeout game in a 2-1 Boston win early September. Clay Buchholz gets the starting nod in Game 2, switching places with John Lackey who got the ball in Game 2 of the ALDS against Tampa Bay. Lackey will face Detroit’s Max Scherzer in Game 3 at Detroit, where he pitched very well last June despite a 4-3 Boston loss. In that game, he gave up just 2 runs while striking out 5 in 7 innings of work.

Game 4 belongs to Jake Peavy who is coming off a starting gig in Game 4 of the ALDS. Peavy was named a postseason starter instead of Ryan Dempster and Felix Doubront, two players who are now in the bullpen.

The Tigers have arguably a better starting rotation, but their bullpen isn’t as dependable as that of the Red Sox’s. Manager John Farrell’s relievers finished had a 3.70 ERA in the regular season, 10th in the league compared to Detroit’s 4.01. The gap between the Tigers and Red Sox widens when it comes to their closers. Boston has the best closer in baseball in the 38-year old Japanese export Koji Uehara. Uehara posted a mind-numbing 1.09 ERA in the regular season, striking out 101 batters throughout 74.1 innings in 73 games. The pair of Junichi Tazawa and Craig Breslow sets him up solidly, too. 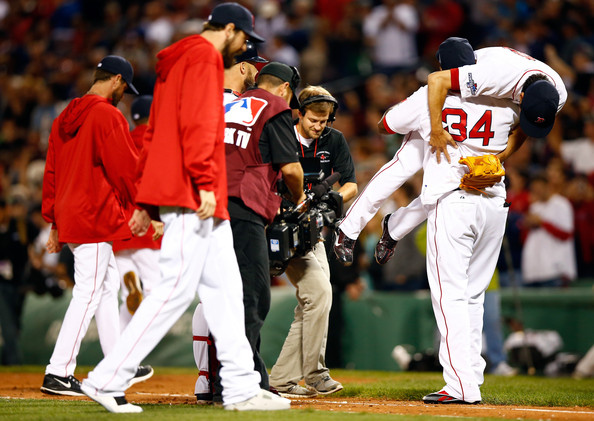 Fresh from making mincemeat of the Rays’ pitching rotation in the ALDS, David Ortiz and the rest of the Red Sox’s lineup are all eyes on mowing down a seemingly tough Tigers pitching staff. Boston set the base paths ablaze in the ALDS scoring 26 runs, most in the AL, and driving in 22 batters, again most in the AL in the postseason. Boston’s batters made the pair of Matt Moore and David Price throw bricks, peppering both pitchers with a combined 19 runs in Games 1 and 2 of the ALDS.

The Red Sox won seven of their last 10 home games against Detroit.  They also went 6-1 OVER in their last 7 road games.