We’re only a few weeks away from the start of the College Football Playoff and excitement is definitely building for the culmination of this year’s college football season. Two mouth-watering semifinals are in the offing on December 31 with No. 1 Clemson taking on No. 4 Oklahoma and No. 2 Alabama locking horns with No.3 Michigan State. Which team will embrace the pressure and grab the ultimate prize – the coveted national championship?

Read on below as we breakdown not only these two semifinal matchups but also TopBet’s projected championship game. While you’re at it, you can check out our sleeper picks and predictions for the upcoming Bowl season.

Capital One Orange Bowl – No. 1 Clemson Tigers vs. No. 4 Oklahoma Sooners

Two of the hottest teams in the collegiate ranks will kick off the College Football Playoff as No. 1 Clemson and No. 4 Oklahoma square off in the Orange Bowl on December 31. The Tigers put together the program’s first 13-0 season with a thrilling 45-37 ACC Championship Game victory over North Carolina, while Oklahoma, the reigning Big 12 champions, barged into the playoffs with an impressive 11-1 slate.

[sc:NCAA240banner ]Leading the way for Clemson in this matchup is star quarterback Deshaun Watson. The dual-threat sophomore has thrown for 3,512 yards with 30 touchdowns against 11 interceptions and rushed for 887 yards and 11 touchdowns on the ground this season. Thanks to Watson’s brilliance, the Tigers have averaged 38 points per game this campaign, 15th in the entire FBS. Clemson is a well-balanced offensive team with the Tigers ranked 23rd nationally in both passing offense (288.5 yards per game) and rushing offense (222.2 yards per game).

That won’t faze the Sooners, though, who have the ever-dangerous Baker Mayfield on their side. He has been a revelation under new offensive coordinator Lincoln Riley, throwing for 36 touchdowns and nearly 3,400 yards this season. The Sooners have benefited immensely from Mayfield’s stellar play, placing third in scoring offense, averaging a whopping 45.0 points per game this season.

It’s not all Mayfield, though, for the Sooners. What makes Oklahoma such a dangerous opponent nowadays is its potent running game. Samaje Perine and Joe Mixon combined for more than 2,000 yards and 22 touchdowns on the ground this campaign. Their play will be crucial in unlocking a Clemson side that is 18th in the FBS in scoring defense, allowing just 20.2 points per game this season. 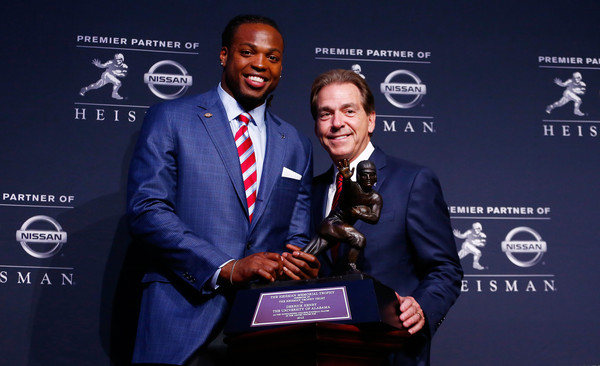 Can anyone stop Alabama? That’s the question on everyone’s lips after the Crimson Tide ripped through the SEC this season. Alabama is one of the hottest teams in the FBS right now, winning its last 10 games, including a dominant 29-15 victory over Florida in the SEC Championship Game. Newly-crowned Heisman winner Derrick Henry starred for the Crimson Tide in that contest, rushing for 189 yards en route to becoming the SEC’s single-season rushing leader. Henry has been a workhorse for Alabama as of late, touching the ball 159 times out of the backfield through their last five games.

He’ll have his work cut out for him, however, against a Michigan State side that is seventh in the FBS in rushing defense, allowing just 113.1 yards per game on the ground this season. The Spartans have some experience this season in dealing with elite running backs. They successfully bottled up Oregon’s Royce Freeman and Ohio State’s Ezekiel Elliott, who averaged just 3.8 and 2.8 yards, respectively, against them in defeats.

Michigan State’s chances will hinge, however, on the health of Connor Cook. The quarterback looked far from 100 percent in the Spartans’ gritty 16-13 victory over Iowa in the Big Ten Championship Game. Cook completed just 16 of 32 passes for 191 yards with an interception against Iowa, but he hardly threw the ball late. On the Spartans’ game-winning 22-play drive, he attempted only five passes and none in the final 12 snaps.

The Spartans will need the fifth-year senior to be at his best to dissect an Alabama side that possesses one of the league’s best defenses. The Crimson Tide are third in the FBS in scoring defense, allowing a measly 14.4 points per game this season. 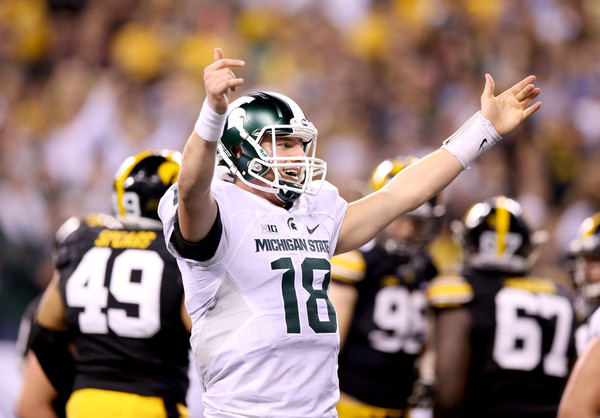 Ohio State did the Big Ten proud when it captured the national title in spectacular fashion last season. Michigan State will be looking to duplicate that feat when it faces Oklahoma in the national championship game at AT&T Stadium on January 11. Just like in the game against Alabama, Cook will play an integral part in this title decider. Michigan State has won at least 11 games in all three seasons with Cook as their starting QB and he would want nothing more than to end his Spartan career on a high.

He’s expected to target frequently top receiver Aaron Burbridge who has made huge strides as a senior this season. He nabbed 80 receptions for 1,219 yards and seven touchdowns this campaign. This passing duo will need to watch out, though, for Oklahoma’s Zack Sanchez who has established himself as one of the nation’s best cornerbacks this season. He had 43 tackles and six interceptions for the Sooners this campaign and he will play a key part in disrupting Michigan State’s offense.

Michigan State ekes past Oklahoma, 27-21, to win the national championship.