Something tells us that we’re in the year of the running back, as the top three Heisman Trophy contenders are all amazing rushers who’ve been leading their teams to victory. Of the three, No. 9 LSU’s Leonard Fournette is the biggest favorite of them all after four mind-blowing weeks of pounding the ball on the ground.

But don’t sleep on those quarterbacks, either. There are two of them knocking on the door of the top spot in No. 4 TCU’s Trevone Boykin and No. 1 Ohio State’s Cardale Jones.

Get the gist for each of the top five contenders for the Heisman Trophy below. While you’re at it, don’t forget to check out the best games to watch in Week 5 of the college football season.

Who can stop this man? Leonard Fournette has been unstoppable as he’s run roughshod over pretty much all of his opponents the past three weeks. He ran for a career-high 244 yards and two touchdowns against Syracuse in Week 4 and ran for 228 yards and three scores the week prior for back-to-back 200-yard rushing days.

[sc:NCAA240banner ]Fournette is the first running back in LSU history to rush for 200 yards in consecutive games. He’s also just one of three running backs in school history with multiple 200-yard rushing games. Considering that a Week 5 home game against Eastern Michigan is a cake walk for LSU, Fournette should have another ground-breaking game, possibly enough to further justify his odds as the -150 favorite to win the Heisman Trophy. 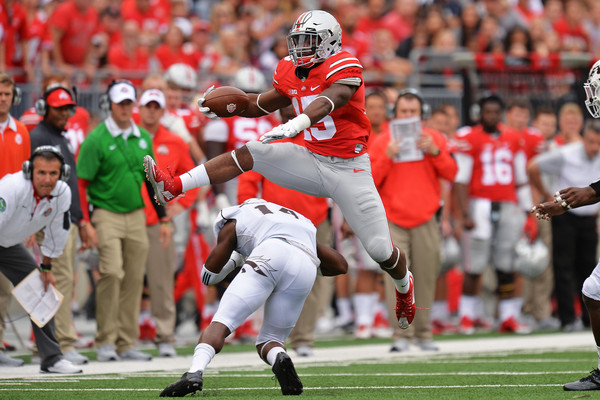 Another running back making waves in the FBS is Ohio State’s Ezekiel Elliott (+800). While he isn’t churning out 200-yarders like he did in the last three games of last season to win the national championship, Elliott has been solid with four straight 100-yard games. Most recently, he ran for 124 yards and a score on 16 carries against Western Michigan in Week 4. Elliott is due a big game against Indiana this coming Saturday, a team he burnt for about eight yards per carry last year.

Make way for Nick Chubb, No. 8 Georgia’s super sophomore running back. Chubb has been pretty solid this season rushing for about 150 yards per game. He’s even scored six total touchdowns and has been the staple of Georgia’s running game. Considering he gets to strut his stuff in a pivotal game against SEC rival No. 13 Alabama in Week 5, Chubb could provide a nice return with his price of +900 to win the Heisman Trophy. 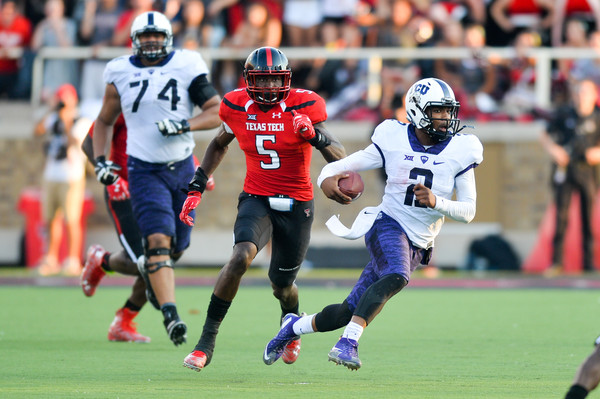 TCU’s high-octane offense will be hogging the spotlight this season. As such, quarterback Trevone Boykin will have to get used to being in the limelight and continue to put up stellar numbers. Boykin exhibited his big-play abilities in a gritty 55-52 victory against Texas Tech in Week 4, where he passed for 485 yards with four touchdowns and no interceptions. He also racked up 42 yards on the ground.

With plenty of issues in TCU’s defense, Boykin will have to keep flashing his strong arm and nimble legs for the Horned Frogs. He’s a tasty sleeper at +1,000 to win the Heisman Trophy.

Cardale Jones is Ohio State’s unquestioned starter at quarterback according to coach Urban Meyer. But he’s been quite a head-scratcher this season. He’s completing just 57 percent of his passes and has thrown as much touchdowns as he has interceptions (four).

Jones may be a steal at +1,200 considering that he tends to shine the brightest with greater pressure. In his last three games last year (Big Ten Championship Game, CFP Semifinals and National Championship Game), he completed 61 percent of his passes, averaged 9.4 yards per pass attempt and threw seven touchdowns and just two interceptions to win the national championship.

Create a betting account now and lay some money on college football’s best and brightest.