The New York Giants’ playoff hopes are still very much in the balance. A recent losing skid has seen them fail to take control of a very winnable NFC East, but they remain in the race for the division title. Eli Manning and co. must now take care of business on the road against the Miami Dolphins, whose hopes of claiming a wild card spot in the AFC are still alive after beating the Baltimore Ravens.

Read on below for our comprehensive preview of this Monday night matchup between two playoff hopefuls. Meanwhile, check out more Week 14 matchups with playoff implications, namely the Seahawks vs. Ravens and Titans vs. Jets.

The New York Giants just can’t seem to get across the finish line this season. They blew a 10-point fourth quarter lead against the Jets and eventually lost at overtime, the fifth such time they’ve lost after being ahead in the final frame. The loss was also the Giants’ third-straight and the fourth in their last five.

[sc:NFL240banner ]Eli Manning failed to complete at least 55 percent of his passes for the third-straight game, a big factor for the Giants’ current skid. On the bright side, Odell Beckham Jr. continues to be a complete game-changer. He had over 140 receiving yards for the second-straight game, and has a touchdown catch in three-straight games.

Miami’s defense has given up 24 passing touchdowns this season – the fourth-most in the NFL – so look for Manning and ODB to at least threaten with another end zone connection.

The Giants are 5-1 all-time against the Dolphins, but have not covered in their last three meetings.

Betting on the Miami Dolphins (5-7) 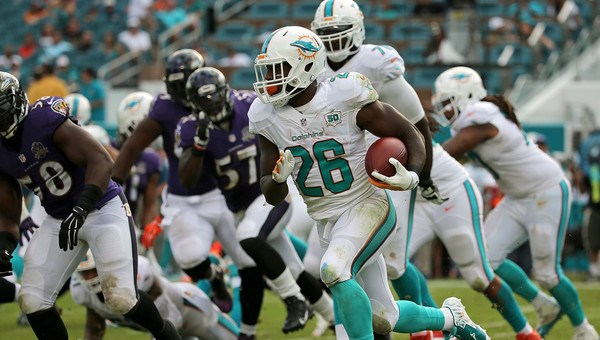 The Miami Dolphins have a new identity under interim offensive coordinator Zac Taylor. In Taylor’s first game in charge, the Dolphins finally unleashed Lamar Miller, who helped the Fins to a 15-13 win against the Ravens. Miami was unable to cover, though, and is now 1-5 ATS in its last six.

After refusing to test the Ravens’ subpar secondary, expect the Dolphins to continue their new gameplan of running the ball down their opponent’s throat. New York’s run defense has slipped since a strong start the season. It’s giving up 129 rushing yards per game over its last seven games.

Even if the Dolphins do decide to pass, they have a couple of explosive targets in Jarvis Landry and DeVante Parker, who’s finally coming on strong late in his rookie year.

Meanwhile, the defense held up well as it gave up a season-low 13 points against Baltimore. Defensive end Olivier Vernon has been excellent in the pass rush despite missing Cameron Wake on the opposite side. Vernon now has 4.5 sacks in his last three games.

With the Giants’ O-line still banged up – left tackle Ereck Flowers suffered a sprained ankle in the second half against Baltimore – Vernon should be able to apply significant pressure on Eli Manning and disrupt the Giants’ explosive passing game.