For the first time since 2012, the Florida Panthers are going to dance in the Stanley Cup Playoffs. Florida finished the regular season with 103 points and will get the New York Islanders in the first round. The Islanders, meanwhile, are looking to do better than their first-round exit a year ago. Which team will draw first blood? Read on for more about Game 1 of this series. You can also check out our preview for the Flyers vs. Caps showdown.

The Islanders didn’t have a nice end to their regular season, as they lost back-to-back to Buffalo (4-3 OT) and Philadelphia (5-2), respectively.

While the Islanders lost the first two matchups this season with Florida, they were able to score a 3-2 victory at home on March 14. Thomas Greiss was steady in front of the net in that game, stopping 23 of Florida’s 25 shots on goal to outduel the more-decorated Roberto Luongo of the Panthers.

It won’t be Greiss in between the pipes for Game 1 of this series, though. Instead, it’ll be Jaroslav Halak minding the net in the series opener. Halak was incredible in his only game against Florida this season, allowing just two goals on 25 shots faced, albeit in a 3-2 shootout road loss on November 27. Halak has been successful against Florida thus far in his career, as evidenced by his 9-3 record and 2.07 GAA across 13 appearances versus the Panthers.

The Islanders are 13th in the league in scoring defense with 2.57 goals allowed per game. Their ability to take the air out of opposing teams’ power play attacks is what sets the Isles apart defensively. They are fourth in the league with an 84.5 penalty kill percentage. The Panthers went just 1-for-6 on the man advantage versus New York.

John Tavares failed to score against Florida in the regular season, so he’s due for a nice offensive outing in this series. The Islanders have depth on offense with lethal scorers from the top line down to the fourth, where guys like Brock Nelson and Anders Lee are featured. Nelson had a goal and an assist against Florida this season.

The Islanders are 3-0 in their last three road games. 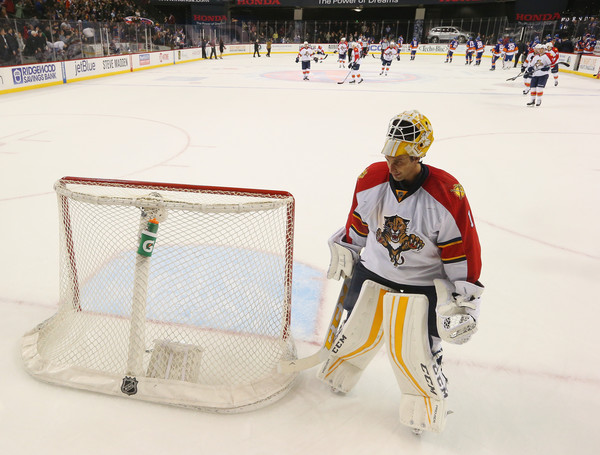 The Panthers’ points leader is 44 years old, while their starting goalie is 37. That’s Jaromir Jagr and Roberto Luongo, respectively, and these two gritty veterans will look to lead the Panthers to a win this Thursday at home, where they are 4-1 in their last five games against the Islanders.

The Panthers aren’t letting their elders do all the work, though. Jagr finished the regular season with 66 points, but he got massive help from the likes of Aleksander Barkov and Vincent Trocheck, who’ve combined for 53 goals on the season. Barkov had two goals and three assists in three games against the Isles in the regular season.

Florida boasts of a bustling offense that put up 2.83 goals for per game. That’s despite of an unspectacular 28.8 shots on goal, just 24th in the league. The Panthers are pretty efficient on offense, needing just 10.16 shots per goal—good for fourth in the NHL. That accuracy was on full display when the Panthers beat the Isles on December 15, 5-1, despite getting massively outshot, 34-16. In addition, Florida is third overall with 2.47 goals scored per 60 minutes of ice time.

Luongo, of course, had a big hand in that win after notching 33 saves off those Islanders’ shots on goal. The former Islander anchors Florida’s defense that ranks seventh in the NHL with 2.44 goals allowed per game. Luongo ended the regular season with a 35-19-6 record to go with a 2.35 GAA and .922 SV%.