Two weeks are in the books, and things are starting to shape up – the Bengals are crumbling, the Rams are improving offensively, and the Ravens are back being monsters on defense.

Those are just some of the few trends that are very intriguing going into Week 3. Let’s now preview the upcoming set of games and find out which teams have an upper hand. Read on!

Different offensive-minded coach, same offensive stagnancy – the 49ers are yet to score a touchdown and they’re two weeks in. They are only putting up six points, 12 first downs, and 232.5 yards per game.
Despite splitting the first two games, the Niners’ California neighbors, the Rams, are looking like a much better team than last year’s, so it’s an automatic positive. Jared Goff, in particular, is more comfortable in the pocket. He’s throwing for 265 yards per game and has a 2-1 touchdown-interception ratio. 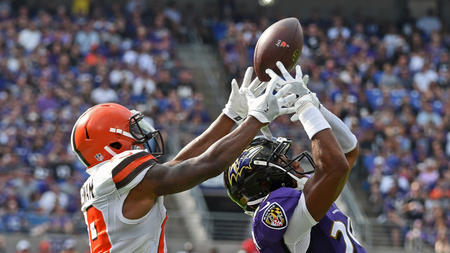 The Ravens’ defense are simply owning right now. After shutting out the Cincinnati Bengals in Week 1, 20-0, which had them tallying five interceptions and 10 quarterback hits/sacks, they eased past the Cleveland Browns in Week 2, 24-10, and once again punished the QBs, as they picked them off four times and had a baker’s dozen hits. The Jaguars also had a memorable defensive performance in Week 1, highlighted by the 10.5 sacks and an easy win. The difference, however, is they failed to follow it up, as Week 2 saw them lose by 21 to the Tennessee Titans.

The Broncos have jumped into a 2-0 start for the fifth-straight season, and unlike last year, it’s not only the defense that’s doing the damage. Trevor Siemian, for one, just tossed four TDs in Sunday’s 42-17 win against the Cowboys. The Bills are quite different. Their defense, particularly the front seven, has been doing more, as it held the Jets to just 2.5 yards per carry in Week 1 and then got to Cam Newton nine times in Week 2 (six hits and three sacks).

The Saints are 0-2, as they played flat against the Vikings and then ran into a Patriots team that are in a bad mood, who dominated them, 36-20. Drew Brees is being his classic self (323.5 YPG, 3-0 TD-INT ratio), but because the defense is giving up 27.5 points and 512.5 total yards per game, they are looking off. Brees and company will have a chance to get their first W when they visit the erratic Panthers, who only managed to score nine points in Week 2, and also lost tight end Greg Olsen to a broken foot. Thus, Carolina’s defense will be tasked to be extra disruptive moving forward.

As expected, the Browns got trounced by the Ravens defense in Week 2. They had five total turnovers, three of which were intercepted passes from DeShone Kizer. The rookie QB has 404 yards and a 1-4 TD-INT ratio in two games, and his backfield is yet to score a TD. Cleveland’s defense is being unpredictable, as it held the potent Steelers offense to 290 total yards, but gave up 337 to the less-explosive Ravens attack.
Indianapolis is experiencing growing pains without their franchise QB, Andrew Luck. The team is now 0-2, and could be on the way to several more losses. They have no reliable back-up under center, and their defense is arguably worse (319 passing yards allowed per game).

The Texans had one of those ugly wins in Week 2, as they came out on top in a clash of two struggling offenses, beating the Bengals, 13-9. Rookie QB Deshaun Watson had a number of rookie mistakes, but all in all, he was pretty servicable – 15-for-24 for 125 yards, five carries for 67 yards and one TD. The Patriots, who may still be bitter from their Week 1 dud, will be looking to teach the NFL neophyte a lesson. Tom Brady is coming off a 447-yard, three-TD night, and should be eager to put up such numbers again.

After a shaky Week 1 that saw them only beat the young Browns by three points, the Steelers got a much comfortable win in Week 2 when they had a commanding 26-9 win over the Vikings. Ben Roethlisberger is performing the way he is expected to be (253 YPG, 4-1 TD-INT ratio), but LeVeon Bell is still quiet (3.2 yards per carry, zero TDs).
The Bears are 0-2 – to no one’s surprise, of course – while allowing 26 points and 341 total yards per game, although it’s encouraging to see Mike Glennon go for 301 yards on 31-for-45 passing this past Sunday.

This year’s “Hard Knocks” team, the Bucs, finally had their season debut, and it was a good one. They ran past the Bears, 29-7, with the Jameis Winston-Mike Evans connection not missing a beat – the QB had 204 efficient yards, and connected with his gigantic receiver seven times for 93 yards and a TD. The Vikings didn’t enjoy Week 2 as much, as they suffered without QB Sam Bradford (knee), and lost to the Steelers, 26-9.
The Bucs’ offense and the Vikes’ defense will be showcased in this game, but the outcome will depend on Bradford’s health, because the veteran QB keeps the offense’s engine, and we just saw how non-existent it can be without his presence.

Writer’s Prediction: The Vikings win if Bradford plays, and lose if he doesn’t. Another team that finally got their season rolling are the Dolphins. It was a quite the opener too, as they had a nail-biter against the Chargers before earning a 19-17 win. The QB-WR-RB trio each had good stat lines, with Jay Cutler throwing for 230 yards and one TD, Jarvis Landry catching 13 passes for 78 yards, and Jay Ajayi ramming defenders for 122 yards.
Josh McCown and Jermaine Kearse have connected for 11 catches and 123 yards in the Jets’ two losses, but overall, the team is simply a mess, as expected. Following a 21-12 loss to the offensively-challenged Bills, they got toyed with by the Raiders, 45-20, and allowed 410 total yards and six TDs.

The Seahawks won a low-scoring affair against the 49ers, 12-9, wherein their go-ahead touchdown late in the fourth was the only TD in the game. Russell Wilson is throwing for an underwhelming 178 yards per game and only completes 56 percent of his passes. Defense remains the strength of the ‘Hawks.
The Titans rebounded from the disappointing Week 1 loss with a 37-16 thrashing of the Jaguars. As the score suggests, both of their units played well. However, they also got a crushing news, as star running back DeMarco Murray is now nursing a hamstring injury.

The Chiefs’ sensational rookie, RB Kareem Hunt, showed up again in Sunday’s 27-20 win over the Eagles. The former Toledo continued his tear, as he had 109 total yards and a pair of rushing scores. He may have another big day against the Chargers’ suspect front line.
The Chargers enter as losers of two-straight heartbreakers, both of which feature issues in the field goal unit. Phillip Rivers is netting 261.5 YPG and has a 4-1 TD-INT ratio, while Melvin Gordon has 167 total yards and two total TDs.

The Bengals are just horrible right now. They have plenty of weapons and none of them really work. After a 20-0 shutout from the Ravens in Week 1, they looked as boring as any team can be in Week 2, and once again failed to score any TD. Their run defense allows 162.5 yards per game.
The Packers went 1-1 on their first two games. Aaron Rodgers and his crew will be looking to take out their frustration from Sunday’s 34-23 loss to the Falcons on Cincy’s dysfunctional unit. Rodgers is averaging 327 YPG and has a 3-2 TD-INT ratio. Offense, offense, and more offense – it’s what the Raiders offered in their cruising 45-20 victory over the lowly Jets. They tallied six touchdowns, three each via receiving and rushing. Derek Carr went 23-for-28 for 230 yards and three TDs (all to Michael Crabtree).
Kirk Cousins and his Redskins bounced back from their disappointing Week 1, as they marched into the Rams’ home field in Week 2 and came out with a 27-20 win. Things aligned for the ‘Skins – Cousins had a clutch go-ahead TD toss late in the fourth, the backfield had 222 yards, and the defense sealed it with a game-clinching interception.

The season-opener felt like a bye week for the Cowboys (won against the Giants, 19-3), so it’s only right they experience plenty of challenges in Week 2. They had a rough go on the high altitude of Colorado, and got routed by the Broncos, 42-17. Dak Prescott was decent again (238 yards, two TDs, two INTs), but Ezekiel Elliot struggled mightily (nine carries for eight yards). The Cardinals, meanwhile, redeemed themselves from their Week 1 mediocrity. Carson Palmer threw for 332 yards and on TD in just 19 completions, and the defense pounded the opposing QB for 12 hits (four were sacks).

Create a betting account now and get started with wagering on the new NFL season!