If the Wild Card round of the playoffs serves as a precursor of things to come, then we’re likely in for even more rather unlikely upsets in the Divisional round just as well.

[sc:NFL250 ]For the first time in NFL playoff history, all four road teams prevailed with victories in the opening round. And as it stands, early returns from the oddsmakers have all four visiting teams as underdogs entering the next stage of the postseason.

With that in mind, we should all prepare ourselves for more shocking results this coming weekend. Instead of picking just which particular sleeper will likely beat the spread laid out against them, we’ve considered every underdog’s prospects of winning or losing their upcoming matchup, along with a predicted outcome that might still tip towards the actual favorite as applicable.

Let’s now take a closer look at each of the four underdogs’ cases heading into their respective Divisional round showdowns. After this, head on over to our complete preview of next weekend’s thrilling postseason action to keep tabs on every sweet NFL betting opportunity at stake.

Sleepers in the Divisional Round of the 2015-16 NFL Postseason

Why the Chiefs will win: The Chiefs have all the momentum in the world right now. 11-straight wins to date along with the team’s first playoff win since 1994 – a dominant 30-0 manhandling of the Texans on the road this past Saturday (also the first playoff shutout in the NFL since 2005).

[sc:NFL240banner ]If you would also recall, it was Kansas City who almost sent the Pats’ 2014 season into a downward spiral with an early-season rout before New England blitzed the entire league almost the rest of the way for their fourth Super Bowl title.

Why the Chiefs will lose: Stud wide receiver Julian Edelman is set to return for the Patriots for his first on-field action since mid-November, which gives Tom Brady a much-needed downfield threat in the passing game. Meanwhile, Kansas City will be without its own dependable wideout in Jeremy Maclin.

And who are we kidding? We have Brady in another playoff game in Foxborough, and that should spell doom for the Chiefs. New England has won all four of its previous Divisional round contests, having earned a first-round bye and home field advantage in all four instances as well.

Writer’s Prediction:  No Super Bowl repeat for that Pats this time; Kansas City (+5) with the 26-21 upset. 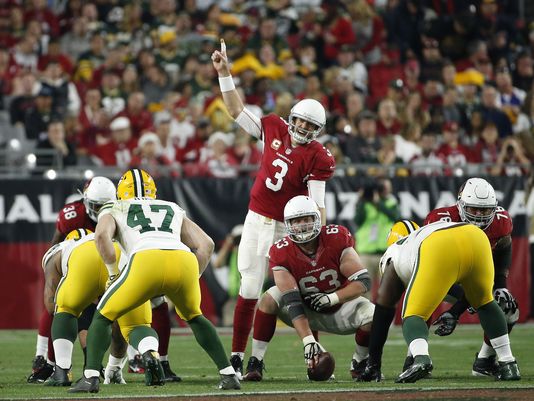 Why the Packers will win: Green Bay’s offense finally came to life against the Redskins on Sunday and with a balanced effort to boot. Aaron Rodgers was methodical in passing for 210 yards, 2 touchdowns and no interceptions, while the run game mustered up 141 yds on the ground on 32 carries. Mind you that we’re dealing with a playoff-mode Rodgers right now, too.

On defense, The Packer pass rush was also present in the team’s wild card win on Sunday, sacking Washington’s Kirk Cousins six times and disrupting their opponents’ passing game time and again. Arizona’s Carson Palmer could be in for a long afternoon this coming Saturday, alright.

Why the Packers will lose: Remember the 38-8 beat-down that the Packers suffered at the hands of Cards in the desert in Week 16? Yep, that wound is still fresh, with Arizona’s own pass rush getting to Rodgers a whopping nine times then. Green Bay might also have to play without solid left tackle David Bakhtiari, meaning that Saturday’s clash is shaping-up to be a sack-happy affair on both sides of the ball.

In addition, the Packers will try to run the ball against Arizona and the sixth-best run defense from the regular season. We’re pretty much aware that the Cardinals’ offense is just if not more prolific than Green Bay’s, but it’s their well-rounded defense that gives them the edge over their Divisional round opponent.

Writer’s Prediction: The Cards advance to the NFC Championship Game for the first time since 2008, but the Packers (+7) still manage to cover the spread with a final score of 34-29. 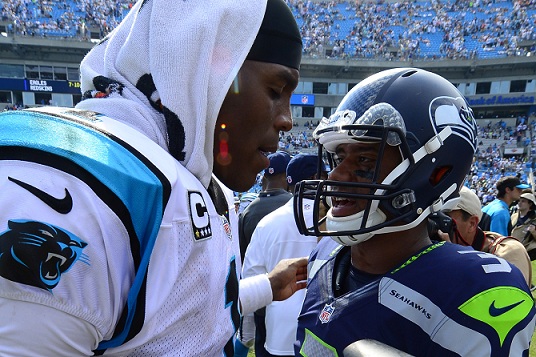 Why the Seahawks will win: Three words that have stricken fear into the rest of the league for about half-a-decade now: Legion of Boom. Seattle’s defense once again finished the regular season having allowed the fewest points in the league for the fourth-consecutive year, even limiting the Vikings to just three field goals in Sunday’s first-round victory in Minnesota.

Then there’s Russell Wilson, who has given Seattle’s offense a huge boost by putting up franchise-record numbers in the passing game almost all within the second half of the campaign, and after tight end Jimmy Graham’s season-ending injury all the more. Expect Wilson, the current frontrunner for the OPOY award, to tear Carolina’s suddenly weak pass defense this coming weekend.

Why the Seahawks will lose: Well, for all of the praises we just threw in Wilson’s way, his prowess was actually nowhere to be found in the aforementioned win over Minnesota. He only completed half of his 26 pass attempts for 142 yards, a TD and a pick, with Seattle putting up just 10 points on the board and nearly losing the game if it wasn’t for Minny kicker Blair Walsh’s blunder of a gimme field goal attempt to supposedly seal the game for the Vikes.

Those issues, in turn, have likely set the Panthers up well for the kill. They will look back at their 27-23 win over the Seahawks earlier this season as their blueprint (albeit when Wilson was still playing quite abysmally at the time), and their crushing 2014 Divisional round loss – again, to the Seahawks – as proper motivation. Throw in Marshawn Lynch’s iffy status as a starter for Seattle’s offense this weekend, and Carolina now has handful of positive notes tipping the scale in their favor. 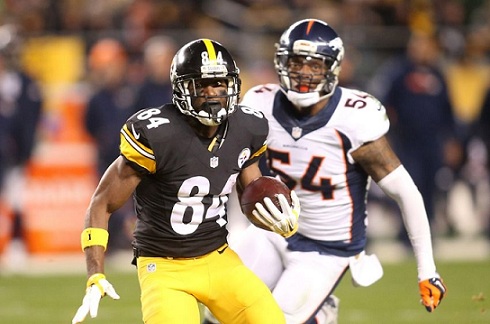 Why the Steelers will win: Pittsburgh already has a win over the Broncos this season, a 34-27 victory at home that saw the team rally from a 14-point deficit in the second half. The Steelers saw firsthand that their receivers ultimately matched-up well with Denver’s stingy secondary then, and will look to exploit that same principle this weekend.

On the other side of the ball, Pittsburgh’s pass rush has also been rather superb in the regular season, having racked up a total of 48 sacks – third-most in the NFL. Denver’s Peyton Manning is far from his MVP-caliber days already, and he has cracked under heavy pressure when the opposition is fully intent to take him down to the ground (see: Manning’s five-sack, four-pick day in the mid-season loss to Chiefs for arguably his worst outing since his rookie campaign).

Why the Steelers will lose: The brunt of the Steelers offense hinges on Roethlisberger and standout receiver Antonio Brown in the passing game, especially now more than ever since the team will be operating a running game with their third- and fourth-string running backs for another crucial playoff bout. No thanks to the nasty Bengals, both of the Steelers’ high-flying superstars are still tentative to start in Sunday’s contest, with Roethlisberger sporting what seems to be a sprained right shoulder and Brown still not yet cleared from the concussion he just suffered.

Oh, and there’s just that one big elephant in the room that is the Denver defense, which was tops in the league during the regular season in pass defense (less than 200 passing yards allowed per game, 23 total interceptions). If Roethlisberger – let alone Brown – doesn’t suit up for Sunday’s game, Pittsburgh can kiss its playoff run goodbye, alright.

Writer’s Prediction: The Big Ben-to-Brown connection is active and in full display this weekend as the Steelers (+6.5) shock Denver, 28-24, which also serves as a redemption from their brutal OT loss to the Tebow-led Broncos back in the 2011 postseason.

Create a betting account now to cash in on any or all of these underdogs in the 2015-16 NFL playoffs.