One week into the season and No. 11 Notre Dame is already dreaming of a New Year’s bowl game. There’s a lot of optimism in the air in South Bend after the Irish took care of Texas in Week 1 behind a very promising performance from quarterback Malik Zaire.

However, the Irish will have to go on the road next week against the Virginia Cavaliers, who, despite their big Week 1 defeat to UCLA, are certainly no pushovers in Charlotesville.

Read on for our complete preview of this Week 2 matchup below. Meanwhile, check out this Saturday’s other top games with our previews of No. 7 Oregon vs. No. 5 Michigan State and Miami (OH) vs. No. 20 Wisconsin.

The Notre Dame Fighting Irish couldn’t have asked of a much better start to the season as they trounced Texas 38-3 in South Bend.

[sc:NCAA240banner ]The Irish played a complete game on both sides of the ball. The offense, led by junior quarterback Malik Zaire, put up 527 yards against a talented Texas D. Zaire was nearly flawless as he went 19-of-22 for 313 yards and three touchdowns. Meanwhile, their experience-laden defense limited a sorry Longhorns offense to 163 total yards.

However, their running game suffered a big blow as last year’s top rusher Tarean Folston (889 rushing yards and six touchdowns in 2014) tore his MCL against Texas and will be out for the season.

Redshirt junior C.J. Prosise and freshman Josh Adams should be able to make up for Folston’s absence just fine against Virginia. Prosise had 20 rushes for 98 yards against Texas, while Adams carried the ball five times for 49 yards and two touchdowns.

Zaire can also be a dangerous weapon with his legs – he rushed 22 times for 96 yards and a touchdown against LSU in last year’s Music City Bowl – although he and top receiver Will Fuller (seven catches, 142 yards, two TDs vs. Texas) should be able to connect against a Cavalier defense that gave up 351 yards and three TDs to true freshman Josh Rosen last week.

Notre Dame’s defense gave up 43.5 points per game in its final four road games last season (although their opponents were Florida State, Navy, Arizona State and USC) and went 1-3 (straight up and against the spread) in those games. But it shouldn’t have too many problems against a Virginia offense that averaged just 18 points in four games against ranked opponents last season.

Create a betting account now and cash in on the luck of the Fighting Irish this NCAA football season. 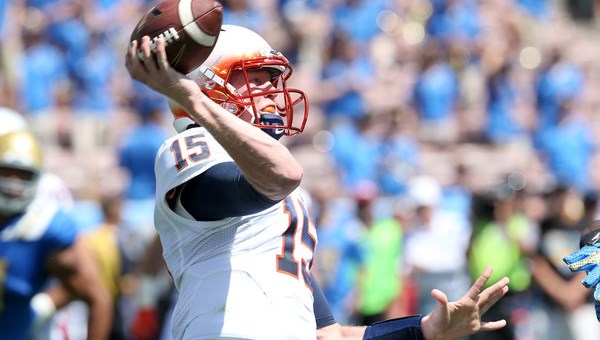 As expected, Virginia went into Westwood and lost to No. 13 UCLA, 34-16. The Hoos just couldn’t handle five-star freshmen Josh Rosen and Soso Jamabo, who rushed for 79 yards on nine carries. As a result, they just barely failed to cover the 17.5-point spread.

However, the Hoos did show some promising signs in that game, particularly on offense. Junior quarterback Matt Johns went 21-of-35 for 238 yards with a touchdown and an interception as they moved the ball reasonably well against a very talented UCLA defense.

Johns threw his lone touchdown pass to running back Taquan Mizzell, who showed flashes of living up to his five-star potential against the Bruins. Mizzell had only 45 yards on 16 carries, but made up for it with eight catches for 100 yards. The Hoos will be counting on Mizzell to make a couple more big plays against the Irish.

Virginia’s offense (26 points per game) was subpar last season, but it was much better at home, where it averaged 30.6 points. The Hoos’ defense was also more impressive in Charlottesville, allowing just 19 points per game in seven home games.

That terrific defense helped the Hoos go 5-2 (straight-up and against the spread) at home. Virginia’s pass defense was burned badly by the Bruins, but the secondary is actually one of the team’s strengths and should bounce back with a better performance at home.

Zaire and the Irish (-11.5) continue their impressive start to the season with a comfortable 38-20 win in Charlottesville.