Coming off a bye, the San Diego Chargers should have several key players back in their lineup against the Raiders in Week 11. The Raiders are still winless 10 weeks into the season and will be desperate for a win against a team they almost defeated in Week 6. Will Oakland cause the upset? Or will Phillip Rivers lead the Chargers to a much needed win?

Read on for more on this game, or for more Week 11 reading, check out our complete picks and predictions for every game on the schedule, or our preview of the Sunday Night Football game between the Patriots and the Colts.

The Oakland Raiders have played better football since interim coach Tony Sparano took over in Week 5, but are still winless in nine games after they were blown out 41-17 by the Denver Broncos on Sunday. The Raiders played the San Diego Chargers hard in the first meeting of these divisional foes, on October 12th, a 31-28 Chargers win.

In that game rookie quarterback Derek Carr threw for a season-high four touchdowns, running back Darren McFadden had his best rushing performance running for 80 yards on 14 carries and wide receiver Andre Holmes caught four passes for 121 yards and two scores.

[sc:NFL240banner ]Since then, Holmes and McFadden have failed to impress, while Carr was able to top his perfromance as he threw for 328 yards and a touchdown against the Cleveland Browns. Carr has been one of the few bright spots for the Raiders this season, and if given enough protection, he may be able to come up with a scintillating performance in this game.

Carr’s offensive line has provided excellent protection this season (the Raiders have allowed only 10 sacks thus far) and should give Carr the time in the pocket to attempt some big plays against a San Diego defense that has given up three touchdown passes in its last two games.

On the other side of the ball, the Raiders need to tighten up their rushing defense. They allowed San Diego rookie running back Branden Oliver to run for 101 yards and a score in the first meeting between the two teams.

The Raiders now have to contend with the running backs Ryan Mathews and Donald Brown, who are both coming back from injury. The two backs should be a stern challenge for Oakland’s front seven which has not shown much improvement after allowing 267 total rushing yards in back-to-back games against Denver and Seattle.

The total has gone under in four of the Raiders’ last five games.

Create a betting account now and get yourself deep into the action of the hottest football games rocking the nation. 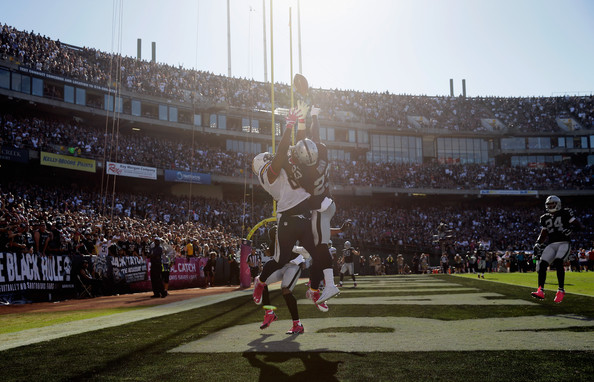 After laying an egg at Miami in Week 9 and losing their third-straight game, the San Diego Chargers had a week off to collect themselves and get healthy.

Quarterback Phillip Rivers, who showed MVP-esque quality early in the season, has gone ice cold of late, throwing five touchdowns and six interceptions in the Chargers’ three-game losing streak. A matchup against the winless Oakland Raiders may be what he needs to get back on track. Rivers threw for 313 yards with three touchdowns and no picks in the first meeting between the two teams.

Making key plays for Rivers will be leading receiver Malcolm Floyd, whose 100-yard, one touchdown outing against the Raiders in Week 5 stands as his best performance of the season. Floyd has generally been outplayed by the ultra-constent tight end Antonio Gates (team-high nine touchdowns) this season.

Mathews (a career 4.4 YPC back) and Brown (4.1 YPC) will be a welcome addition to the Chargers’ backfield, especially after rookie Branden Oliver struggled in the past two games, rushing for 2.1 yards per carry. Having an effective running game will also be beneficial as it relieves some pressure off Rivers.

On the other side of the ball, the Chargers have struggled with their pass rush with Dwight Freeney (two sacks) failing to record a sack since September and Corey Liuget (2.5 sacks) having just one sack in the last six games. However, having young linebackers Manti Te’o, Melvin Ingram and Jeremiah Attaochu returning from injury after the bye week should help San Diego’s defensive efforts in this game.

The Chargers take some time adjusting with several key players returning to competition. The Raiders take advantage to nab their first win of the season. Take Oakland (+10) for the upset.