It’s mid-December already, which means college football’s bowl games are upon us.

On Saturday, the Raycom Media Camellia Bowl will see Mid-American Conference champions the Ohio Bobcats square off against the Sun Belt’s latest addition to the conference, the Appalachian State Mountaineers. Ohio is heading into this weekend’s match with momentum on its side, but ASU has been very consistent throughout this entire season.

Which team will close its season with the Camellia Bowl title in hand in Montgomery? Read on to find out more about this thrilling matchup. Then, check out our previews for the New Orleans Bowl and the Las Vegas Bowl to be on top of all of Saturday’s bowl games on tap.

[sc:NCAA240banner ]The Ohio Bobcats’ 2015 season has been quite a rollercoaster. They started out the season with a 5-1 record, but followed-up that stretch with a three-game slide.

Good thing that the Bobcats closed out the season with a three-game win streak – including the conference title-clincher with a win over MAC powerhouse Northern Illinois – or else they wouldn’t be playing in the postseason at all.

Ohio’s strongest suit is its run defense, one that has allowed over 200 yards rushing on just two occasions this season. The main anchor on this stout D is standout linebacker Quentin Poling, who leads his team with three interceptions and four sacks this season. Poling also has a couple of forced fumbles this year, and his presence will be crucial if Ohio is to stop ASU’s Marcus Cox on the ground.

However, as solid as the Bobcats’ defense has been, the same cannot be said about their offense, particularly at the most vital position: starting quarterback. Derrius Vick began this season as the team’s starter, but had to fight with an ankle injury on and off throughout this campaign. His backup, J.D. Sprague, was a suitable replacement indeed, but Sprague is also dealing with shoulder issues and is only recently recovered from a bad concussion himself.

Both QBs are ready to take to the field this Saturday afternoon, but they’re contrast in styles could give the Bobcats more problems than solutions against the Mountaineers. Sprague is the more efficient of the two with seven touchdowns to just one interception this season, while Vick is the more prolific passer with 10 TDs and two 300-yard games, but did throw six nasty picks in the process as well.

Create a betting account now to get your bets in for all the Bowl games and the national title game before it’s too late. 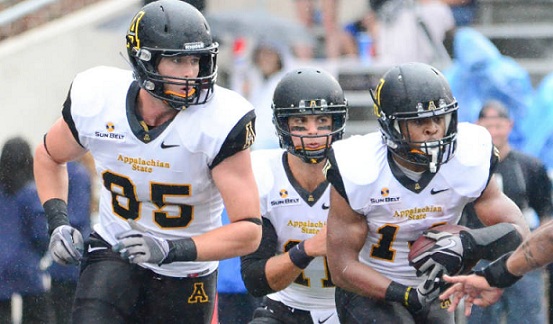 Last year’s transition to the Sun Belt conference proved to be no hindrance for the Appalachian State Mountaineers, former juggernauts over in the FCS.

The Mountaineers wanted to make their first shot at an FBS bowl game a memorable one and they certainly did so with ten wins this regular season. Furthermore, their two losses this year were at the hands of No. 1 Clemson, and Arkansas State, the Sun Belt’s only undefeated team in conference play.

ASU has a resilient defense just like the Bobcats, or even a slightly better one. The team is tops in the FBS in red zone defense with a 63 percent conversion rate allowed to the opposition, and also No. 28 in run defense in terms of yardage allowed per game.

Not only that, but the Bobcats’ offense is quite a force with quarterback Taylor Lamb at the helm. Lamb, last season’s Sun Belt Freshman of the Year, can hurt you with the passing game or with his feet just the same. He has over 2,200 passing yards and 29 touchdowns to just eight picks this season, and has over 350 more yards and four more trips to the end zone on the ground.

Then again, Ohio will still probably focus more on containing running back Marcus Cox instead. Cox racked up 1,261 rushing yards and 10 touchdowns (with two of those TDs via the pass) for the Mountaineers this season. He even put up seven 100-yard rushing days in spite of missing one game this campaign.

If both Cox and Lamb turn up the heat on Saturday, there will be little to no hope for the Bobcats to overcome such a potent offensive combination.

Appalachian State climbs to the top of the bowl game mountain with a sound 41-29 win over Ohio.