If you’re into fun-filled or high-scoring games, then you’re definitely going to love seeing two of the top offensive teams in the nation—the Arkansas State Red Wolves and Louisiana Tech Bulldogs—battle it out mercilessly in this year’s R+L Carriers New Orleans Bowl at the Mercedez-Benz Superdome. Who takes home the glory in this one?

Read on below for an in-depth breakdown of this promising encounter. And while you’re at it, check out our NFL Week 15 previews:  Chiefs at Ravens and Lions at Saints.

[sc:NCAA240banner ]After losing three of their first four games of the season, the Arkansas State Red Wolves cruised through their remaining eight games to earn their fourth Sun Belt Conference championship in five years. They’ll be carrying this momentum when they lock horns with the Louisiana Tech Bulldogs.

The Red Wolves, who became the second team in Sun Belt history to win three outright league titles, will continue to rely on their offense, that’s averaging 38.4 points per game this year, to help them notch the win this weekend. That said, the pressure is on their beloved signal-caller Fredi Knighten, who has won seven-straight games since taking the starting quarterback job from James Tabary, to lead their drives as efficiently as possible.

Knighten owns a staggering 140.5 passer rating this season and he will have his favorite targets in Tres Houston and Dijon Paschal help him ignite their passing game (206.1 yards per contest). The two have been the team’s most reliable wide receivers with combined numbers of 1,092 receiving yards and 13 scores.

Meanwhile, Arkansas State could also opt to rely on their even-deadlier ground game (226.9 yards per game) that’s spearheaded by the three-headed rushing trio of Michael Gordon (1,055 rushing yards) Warren Ward (643) and Johnston White (573). The three backs have combined for 27 touchdowns this season.

It’s worth noting though, that the Red Wolves will be short-handed in this one. Their starting defensive end Chris Stone and backup receiver Tyler Trosin were both arrested on drug charges last Tuesday. The absence of those two may prove to be costly if head coach Blake Anderson fails to make the necessary adjustments.

Arkansas State is 7-3 ATS in its previous 10 games. 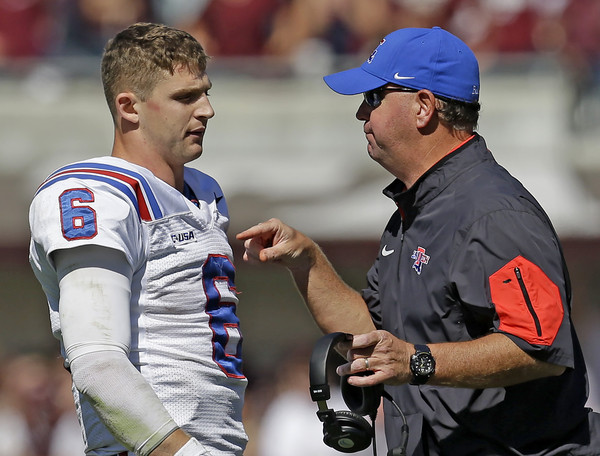 Unlike Arkansas State, the Louisiana Tech Bulldogs’ season ended on a sour note. They dropped their final regular season game to Southern Mississippi, 58-24, on November 28 and finished with a 9-4 overall record. Now, the Bulldogs will look to redeem themselves from their shortcoming by defeating the Red Wolves to capture the R+L New Orleans Bowl title.

Key to their success will be their prolific offensive game that finished with 5,589 yards of total offense and 441 points while averaging a 36.8 PPG this season. A testament to this achievement is Florida transfer and quarterback Jeff Driskel, who was named the Conference USA Newcomer of the Year after passing for career-bests of 3,575 yards and 24 touchdowns.

Apart from Driskel, the Bulldogs’ fate heavily relies on their senior running back Kenneth Dixon as well. Dixon has rushed for 17 touchdowns this year and is averaging 96.8 rushing yards per contest. He’s also currently just 32 yards away from becoming the first player in program history to finish with three 1,000-yard rushing seasons.

Dixon’s bound to garner a lot of attention from the opposing defense all game long. If that’s indeed the case, it can give some opportunities for the Bulldogs to lean on their passing game through their junior wideout Trent Taylor, who holds a team-best of 1,133 receiving yards with eight scores.