The Holy War is set in Sin City this coming Saturday when the Utah Utes take on the BYU Cougars in the Royal Purple Las Vegas Bowl. The Utes looked like a College Football Playoff contender earlier in the season, but split their final six games to plummet all the way down to No. 22 at the end of the regular season.

Meanhile, the Cougars are gunning for a signature win to cap off head coach Bronco Mendenhall’s career in BYU. Mendenhall will be going for his 100th win as the head coach for BYU, and is also gunning to give the team double-digit victories this season after failing to do so over the past three years.

Get excited for plenty of bowl games this year with our complete previews for the AFR Celebration Bowl and the Raycom Media Camellia Bowl.

In a 2015 campaign that lacked marquee victories, the BYU Cougars will pour everything they have in this monumental matchup against the Utah Utes. A victory would be all the more sweeter considering that it would be head coach Bronco Mendenhall’s 100th and final win with BYU before taking over the reins at Virginia next year.

[sc:NCAA240banner ]The Cougars will be powered by the strong play of quarterback Tanner Mangum. The freshman has improved steadily as the season wore on, most recently throwing for four touchdowns in his regular season finale. Mangum is also showing the awareness of a seasoned player, going 123 pass attempts without a pick. But the freshman’s streak will be challenged by Utah’s passing defense, which has 19 interceptions this season (seventh-most in the nation).

Mangum has the advantage of having plenty of big play receivers. Mitch Mathews, Nick Kurtz and Mitchel Juergens have all caught passing touchdowns of over 50 yards in the regular season. Mangum seems to favor Mathews the most, with the senior receiver leading the team with 11 scoring receptions. Having a handful of big-play receivers should help the Cougars exploit Utah’s passing defense that ranks 97th in the nation with 253.4 yards allowed per game.

The Cougars are 4-2 ATS in their last six games. 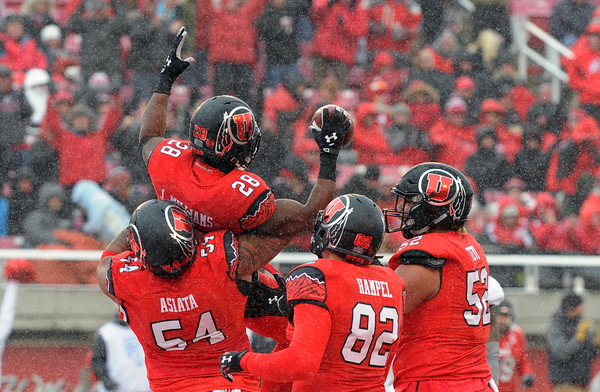 The Utah Utes may be 9-3 just like BYU, but they’ve played a tougher schedule with games against Michigan, Oregon, California and UCLA. What could hurt the Utes is the absence of running back Devontae Booker, who rushed for 1,261 yards and 11 touchdowns before ending the season with a knee injury in Week 11 against Arizona.

Without their feature running back, the Utes will turn to Joe Williams. A transfer from ASA College, Williams was solid in his first two starts, rushing for 308 yards and a score on 60 carries in the last two games of the regular season. He’ll need to be at his best on Saturday, because forcing team quarterback Travis Wilson to air out the ball could prove detrimental to their offense. Wilson almost has as many interceptions (10) as touchdowns (13) this year.

Utah can also rely on its solid defense to keep them in this game against the Cougars. The Utes face a pretty vulnerable BYU offensive line, which has allowed 29 sacks this season. The Utes have a pair of solid defensive linemen in Kylie Fitts and Pita Taumoepenu leading the team with six sacks each. Senior linebacker Gionni Paul has also been strong in the front seven with a team-high 12.5 tackles for loss.

What could give the Utes an edge is their ability to force turnovers on defense, specifically interceptions. The Utes have 19 picks this season, tied for seventh-most in the nation. Defensive back Marcus Williams has been excellent in picking off opposing quarterbacks with five interceptions for the year. He could certainly be the one to finally pick off BYU’s Tanner Mangum, who has not thrown an interception in the past three games.

The Utes have won the last four games against BYU, going 3-1 ATS.

BYU (+3) roars to a big victory on the strength of Tanner Mangum’s solid play. Create a betting account now and cash in on college football’s spectacular bowl season.