It’s finally time to go Bowling! And what better way to kick off the festivities than with an inaugural bowl game?

The Alcorn State Braves of the SWAC and the North Carolina A&T Aggies of the MEAC are the representatives in the debut of the Celebration Bowl, and only one of them will walk out of the Georgia Dome with the honor of being the first-ever AFR Celebration Bowl champion.

Let’s take a closer look at this compelling matchup below. Afterwards, get to know more about some of the other college football bowl games on tap this weekend with our previews for the New Mexico Bowl and the Cure Bowl.

[sc:NCAA240banner ]Another season of college football’s in the books and another Southwestern Athletic Conference title goes to the Alcorn State Braves.

The Braves became back-to-back SWAC champions for the first time since the 1968 and 1969 seasons on the strength of a stellar regular season finale victory. Alcorn State defeated the Grambling State Tigers, 49-21, in a game that saw head coach Jay Hopson’s squad break away with a four-touchdown lead middle of the fourth quarter to secure the team’s title defense.

It was a sweet win for the Braves, who will not only have great momentum heading into Saturday’s match against the Aggies, but also got their revenge from a mid-season loss to the Tigers. With starting quarterback John Gibbs Jr. only able to play the first half of the season due to an ankle injury, backup QB Lenorris Footman took over the team’s offense the rest of the way almost without a hitch.

In the title-clinching game against Grambling State, Footman showed his versatility through the air and on the ground by racking up over 300 total yards of offense and four huge touchdowns. The sophomore QB has been a duel threat all season long since taking over Gibbs’ duties by putting up over 960 yards both passing and rushing.

Footman will need to be every bit of the breakout phenom he is for the five-time Black College National champions yet again in order for his team to nab a 10-win season for the second-consecutive year, and become the first-ever Celebration Bowl champion as well. 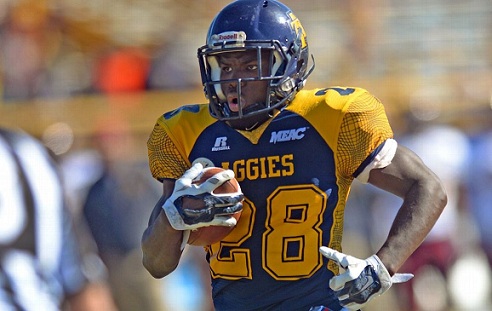 The North Carolina A&T Aggies ended up with an identical overall and conference record from last season. And this year, they’re only sharing the Mid-Eastern title with two other teams: North Carolina Central and Bethune-Cookman (they were MEAC co-champions with NCCU, Bethune, Morgan State and South Carolina State in 2014).

However, the Aggies – with an eight-game winning streak at the time – could’ve avoided a three-way tie atop the conference this season if they had just won the season finale against North Carolina Central. Instead, the team lost that game to settle as three-way co-champs, but was still considered as the ultimate best in the MEAC to represent the conference in the Celebration Bowl on Sunday.

North Carolina A&T will counter the Braves with the one-two punch combination of Tarik Cohen and Brandon Parker. Cohen was the MEAC’s top rusher this season with 1,248 yards – his third-consecutive season with over 1,000 yards rushing. The current MEAC Offensive Player of the Year’s 113.5 rushing yards per game is also third-best in the entire FCS this 2015.

Meanwhile, freshman Parker is the conference’s Offensive Lineman of the Year himself, paving numerous lanes for Cohen to run through the entire season. Together, these two standouts are the Aggies’ best shot and rumbling their way towards the Celebration Bowl title and the team’s first 10-win season since 2003.

Create a betting account now to get your bets in for all the Bowl games and the national title game before it’s too late.