Contenders for the Pac-12 title a year ago, the Arizona Wildcats struggled to even get a bowl spot this season. They needed a Week 11 upset of then-No. 10 Utah to secure a berth in a bowl game. Now the Wildcats face another tough opponent for its season finale, the New Mexico Lobos. The Lobos will be pumped for this bowl game considering that they’re playing in their own home stadium in New Mexico itself.

Get busy with plenty of bowl games this holiday season. Check out the complete previews of the Royal Purple Las Vegas Bowl between No. 22 Utah and BYU as well as R+L Carriers New Orleans Bowl between Arkansas State and Louisiana Tech.

Betting on the Arizona Wildcats (6-6)

The Arizona Wildcats were expected to compete for the Pac-12 title earlier this year, but they were a huge disappointment after finishing the season with just a .500 record. Then again, the Wildcats aren’t afraid to fight back when push comes to shove after they showcased their toughness in a 37-30 double overtime victory over then-No. 10 Utah to secure this bowl berth.

[sc:NCAA240banner ]Quarterback Anu Solomon is the key to Arizona’s success in Saturday’s game against the Lobos. However, he’s listed as questionable after being limited in practice due to a concussion. At his best, Solomon has showcased the ability to shred opposing defenses with either his big arm or his legs. Solomon has terrific this season in passing game the most, throwing for 2,338 yards and 18 touchdowns with just four interceptions.

Airing out the ball may be a good idea for the Wildcats. It’ll help them take advantage of a New Mexico’s leaky pass defense, one that’s merely ranked 86th in the nation (237.7 yards allowed per game). Solomon has the tools in the receiving game to put points on the board. Wide receivers Cayleb Jones, Nate Phillips and David Richards are solid scoring threats, combining for 13 touchdowns this season. Meanwhile, safety Johnny Jackson has played well as a receiver this season as well, catching a team-high five touchdowns.

The Wildcats will also have a stingier defense with All-American linebacker Scooby Wright possibly returning. He was sidelined for most of the season with an injury, playing in just two games. At his best, Wright is a force to be reckoned with as evident in his 14 sacks during the 2014 season. Don’t expect Wright to come storming right out of the gates, though; a little rust is only natural after missing the last eight games.

The Wildcats are 3-0 SU/ATS in their last three games where they were favored by eight points or more.

Betting on the New Mexico Lobos (7-5) 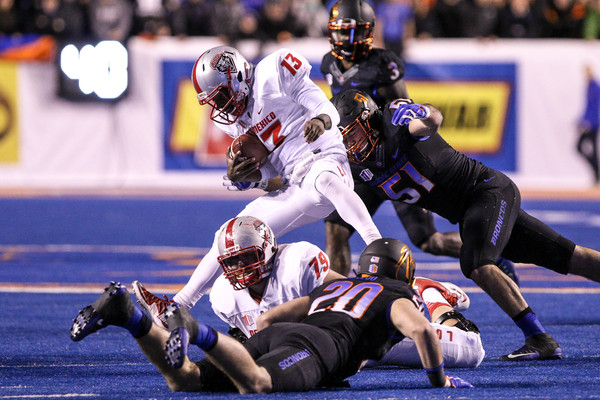 The New Mexico Lobos used their lethal running game to secure a bowl game right on their home turf. The Lobos stormed to a 7-5 slate, and even contended for the Mountain West’s Mountain Division title. They rank eighth in the nation on the ground, averaging 246.5 rushing yards per game.

The Lobos are led by the trio of quarterback Lamar Jordan along with running backs Jhurell Pressley and Teriyon Gipson. Pressley leads the team with 846 yards and 11 touchdowns, while Gipson and Jordan are a step behind with six rushing scores each. All three have run for over 5.3 yards per carry, which could help them against Arizona’s patchy rushing defense that has allowed 188.5 yards per game this season (89th in the nation).

New Mexico isn’t necessarily a prolific team through the air as it has just five receiving touchdowns this season, but its passing game has been very opportunistic. With their opponents crowding the line of scrimmage due to the Lobos’ rushing game, they could surprise with a few throws deep downfield.

The Lobos also have a pretty solid anchor at linebacker in Dakota Cox. He leads New Mexico’s D in tackles (87), and is second in his team in tackles for loss (11) and sacks (five), plus a lone interception. Having an all-around player like Cox should help limit a balanced offense from the Wildcats.

The Lobos are 5-2 in their seven home games this season, going 3-4 ATS.

The Wildcats have too many weapons to lose this game, but New Mexico gives them one hell of a game to cover +10. Create a betting account now and win big on the amazing matchups this bowl season.