Yes, 5-7 San Jose State is going bowling. The Spartans caught a break with the shortfall of bowl eligible teams this year, which allowed them to sneak into the AutoNation Cure Bowl. However, they drew a tough team in the streaking Georgia State Panthers, who have won four games in a row and will be fully motivated to do well in their first bowl appearance in program history.

Read on below for a complete preview of the Cure Bowl. Meanwhile, don’t forget to check out more previews of the early bowl games, like the Gildan New Mexico Bowl (Arizona vs. New Mexico) and the Royal Purple Las Vegas Bowl (BYU vs. Utah).

The San Jose State Spartans didn’t have the end to the season that they would’ve wanted. They lost three of their last four games, two of which came by just a single score. They finished 7-5 ATS this season.

[sc:NCAA240banner ]However, it should be noted that one of those losses was a 17-16 heartbreaker as a 12-point home underdog against BYU, who eventually finished 9-3. That loss showed that the Spartans can indeed hang with some strong opposition.

The Spartans’ star player this season has been running back Tyler Ervin. The senior finished 11th in the nation in both carries (264) and rushing yards (1,469), and added 13 rushing touchdowns. Their passing game, led by quarterback Kenny Potter, was also very effective. They ranked second in the Mountain West in passing yards per game (232.8) as well as passer rating (143.18).

The Spartans will need strong games from both in order to emerge with the big bowl win, and they are certainly capable of providing the goods. Ervin had 263 rushing yards a touchdown, while Potter completed 16 of 20 passes for 181 yards and two touchdowns in their biggest win of the season, a 31-21 upset over New Mexico back in October.

San Jose State will go up against one of the most prolific quarterbacks in the nation in Nick Arbuckle, but the Spartans have been very stellar against the pass this season. They’ve given up just 153.6 yards per game (the best mark in the Mountain West) and 14 passing touchdowns (tied for second-fewest). 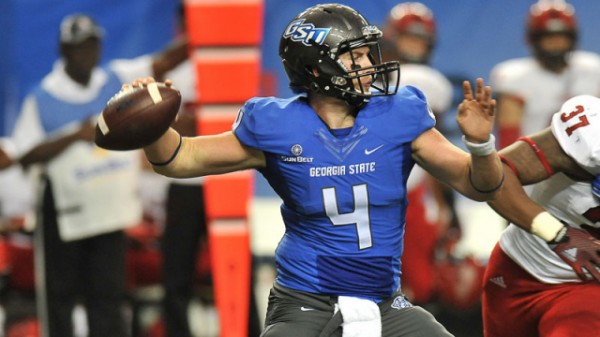 The Georgia State Panthers are quite the Cinderella story. After going 1-21 in the first two years of the program’s history and 2-6 to start this season, Trent Miles’s team ripped off four straight wins, including a resounding 34-7 road win over an 8-4 Georgia Southern team in the season finale, to gain bowl eligibility for the very first time.

Offensively, the Panthers have ridden the very capable arm of quarterback Nick Arbuckle all season and will continue to do so against the Spartans. The senior finished sixth in the nation in passing yards per game (346.7) and had 26 touchdowns with 11 interceptions.

However, it’s been the defense that has been the biggest catalyst for the team’s terrific four-game win streak. The Panthers gave up just 14.3 points per game during that span. It also limited Georgia Southern, the most prolific rushing attack in the nation, to just 135 rushing yards – 220 yards below their season average.

That much-improved rushing defense should give the Panthers a big advantage in terms of neutralizing San Jose State’s main weapon, Tyler Ervin.

Georgia State caps off a dream season by claiming its first-ever bowl win. The Panthers (+3) win, 31-27.